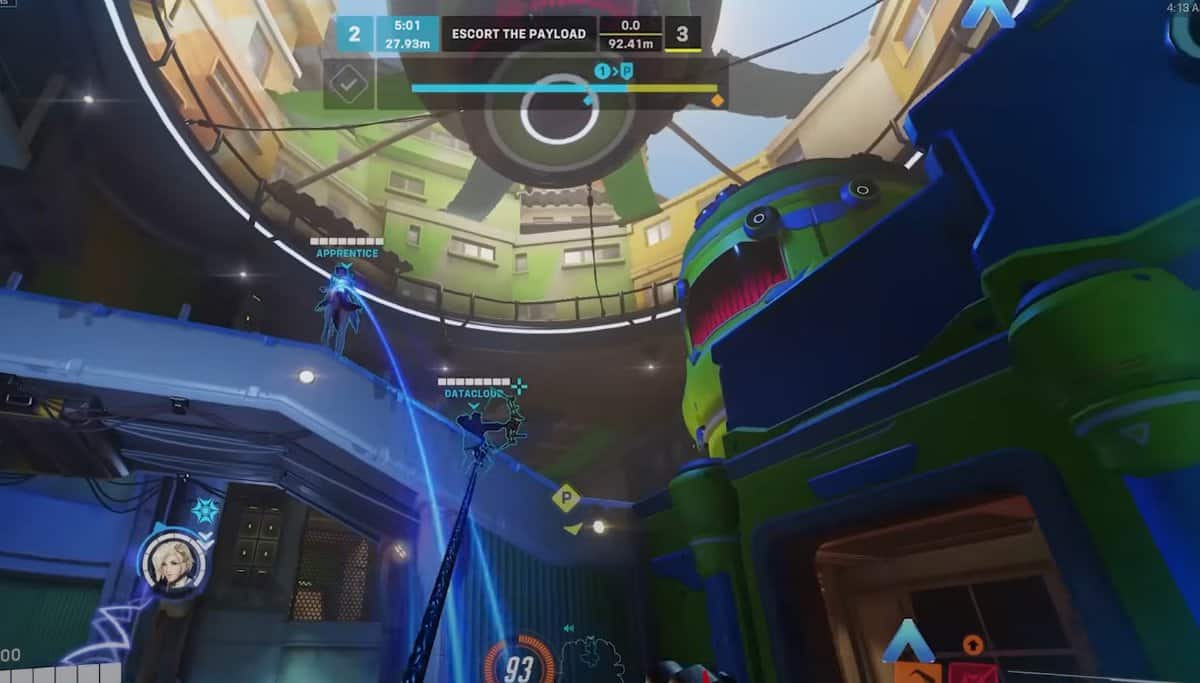 With many changes and reworks done in the second installment of Overwatch, something that remains constant is challenges and the strive to climb up in ranks. In this Overwatch 2 guide, we’ll be taking a look into the best team comps in the game and why you should formulate them.

Below are some of our best Team Comp recommendations for OW2, mostly based on two to three heroes. You may add, subtract, duplicate, or modify according to your playstyle.

Keep in mind that any comp that has two tanks in it is only usable in Arcade or Open Queue modes. Nevertheless, that comp can still be quite deadly when used properly in Overwatch 2.

Starting strong with our first comp for OW2, we have Junker Queen, Genji, Sojourn, Brigitte, and Lucio.

If you’re well aware of the game heroes, you might be wondering why we don’t have a main tank or healer in this comp, and the answer is that Junker Queen is quite enough.

We’re using her as our main leader of this composition, who’s responsible for giving the group members a speed boost and covering other defense areas. She’s great for protecting the allies alongside preventing the allies from healing through her anti-debuff abilities.

Next on the team, we have Genji. He’s got great mobility when he dashes, and you need to use that to wipe away enemies with low HP.

Pair him up and his ultimate abilities with Junker Queen or Lucio; you’ve got an endgame strategy right there.

Giving us the perfect opportunity to discuss Lucio; he’s a great support that is able to keep himself alive during tough fights. He’s got great wall-climbing abilities and can negate enemies through his sound barrier ability.

Sojourn is our second DPS in this team comp who’s great for one-shot kills and revitalizing herself.

And finally, we’ve got Brigitte, a great queen at strengthening the team with her healing abilities and boosting her team’s offensive and defensive attacks.

Our second team comp consists of the classic three, Lucio, Zarya, and Reinhardt. We say these are the classic ones due to their cohesiveness and how well they complement each other.

The two tanks synergize immensely well together and give an energy charge. At the same time, Lucio allows this combo to engage and disengage in proactive ways. As a result, this trio can dictate the state of the game and carry the rest of their team.

The recommend two damage role heroes for this comp are Junkrat and Reaper. We chose them because Zarya can enforce them using her Projected Barrier and balance the team.

It will help her in building up energy for the weapon and Ultimate. She can pull enemies together using the Graviton Surge.

You can finish them off with the aggressive Reaper Ultimate ability. Junkrat is very handy in this situation as it will allow you to deal superb blast damage using his Grenade launcher.

It’s a shame that this comp can only work in Open Queue but work well it does.

Like the wordplay, we did there? Sombra and Doomfist are arguably one of the best heroes to put together and use in your team comp.

They have the best synergy and work very well together. They provide great damage to their enemies, stun them, and disable them. They are a team from hell for your opponents.

With her hacking abilities, Sombra is great at manipulating those with whom she has power over. This ability let her influence the enemies and allows Doomfist to jump in and attack the opponents.

Sombra is notorious for her dirty skill set, but this is what makes her great for us to equip. She also possesses stealthy abilities and debilitating attacks that drain enemies out.

Doomfist, on the other hand, is a highly-mobile frontline tank and can knock away enemies. With good communication, this team comp is undefeatable.

Moving forward, we have a Brawl Comp that aims to blow away enemies on the field. Because of the two tank setup, this highly aggressive comp is only viable in Arcade and Open Queue.

While there are many options for damage heroes, we’ve seen so far that Mei and Reaper complement each other very well.

With her spray weapon and abilities,  Mei can slow down enemies and freeze them. While she does that, she creates an opportunity for Reaper to execute high close-range damage output.

This creates great synergy between the two hence making them the perfect damage duo. Reaper, on the other hand, also performs well individually as he’s a shotgun-wielding assassin with the ability to move and destroy enemies.

While they both are great, they still lack abilities when it comes to moving around due to their limited mobility.

This is where Lucio comes to save. He’s a healer who will promote their speed and let them move around the arena with their killer abilities to wipe out the opposition.

Lucio also tops off tanks like Sigma and Orisa to form a full five-heroes defensive brawl comp. Orisa is one of the strongest tank heroes, and if you pair her up with another tank and healer like Lucio, you can destroy the opposition.

What’s better than spamming your enemies with attacks before even they get the chance to get close to you? Hanzo and Junkrat make the perfect combo for a Spam Comp that focuses on giving ranged damage and not letting the enemies get close to you.

Hanzo is a bowman with a quiver of enhanced arrows. His abilities and weapons let him focus on providing enemies damage from a distance before they even try involving him in a close or choke combat. While Junkrat, on the other hand, is equipped with a frag launcher and area-denying armaments.

He can explode the enemies from a distance and trap them using steel traps. This man has every attack one needs to ace through any tricky challenge.

Together, he and Hanzo are a dream team as they spam enemies from afar.

Even if somebody gets close, they will have them all drained, which will be easy to wipe away. This combo is perfect and plays well on almost every map.

If you’re a fan of quick kills, and a lot of boom bam, this comp is for you. Dive meta was arguably one of the strongest in the original Overwatch and little remains unchanged in Overwatch 2.

The synergy of this attacking comp is immaculate, and honestly, everything you need to get rid of plenty of enemies, all at once.

Tracer and Zenyatta have great attacking strategies that enable them to target enemies and even get those who may stand their ground against them or kite away.

At the same time, Winston engages the front line and creates space. This combo gives bursting damage that will deal with any enemy that comes their way.

The tactic you can use while playing with this dive comp is to use Tracer to take out the Support hero of the enemy’s team and make them vulnerable. You can send Winston to damage them further.

Winston can quickly get back using the launch ability he had. At this moment, you will need further support, which Lucio provides. You can use Lucio Speed boost or healing abilities according to the situation.

This comp consists of Orisa, Roadhog, and Mei. We call them the fantastic three because they perform the best together. Once again this comp only works in open queue due to the tank restrictions.

While Orisa and Roadhog go together like your bread and butter, Mei is the third element adding enough flavor. The two tanks combine abilities and perform well on maps that don’t require much movement.

In contrast, Mei can slow down targets and kill them. Moreover, she can slam other enemies from healing their allies. You can use Ana as your primary support with Orisa, and Moira will work more as backup support.

Moira will help you in situations when Ana is helping Orisa in combos for healing the rest of the team.

Next on the list, we have what we call the Meta comp for Overwatch 2 (for open queue). It is the most powerful composition and has always been a community favorite.

This combo can also be mastered by the low ranks and help create a stable base of shield and space from which your teammates can easily operate.

Sigma’s barrier supported by Orisa’s new changes like the Javelin Spin creates a hard-to-break wall that mitigates pretty much all incoming damage.

Staying behind these two tanks, Baptiste can wreak havoc on enemy frontline even outside of his sentry turret formation. Baptiste gets full support from the other healer Ana and Soldier: 76 works to balance this team with his unique DPS abilities.

Another powerful and aggressive comp on our list is Zarya, Sombra, and Genji. Their sync with each and backup on various grounds is what makes this trio undefeatable and hard to tackle.

They can wipe out the number of enemies when mastered well. They are a disruptive, proactive, and lethal combo. You can add two healers, like Ana and Kiriko, to ruin the opponent team.

Kiriko not only heals but also plays the utility role and helps you in many combos. Both Ana and Kiriko’s ultimate aim towards buffing the team’s attacking and movement speed and can heal over long range so are highly useful.

This double sniper combo in OW2 will eliminate the biggest threats you’ll be facing and ensure you get out of challenging scenarios without having a hard time.

The Hanzo-Widowmaker comp in OW2 is undefeatable on maps with high grounds and performs the best. Mercy, on the other hand, is great for providing this duo with great backup when they deal damage.

You can place Lucio behind the D.Va to create havoc in your enemy’s team. D.Va will take a lot of damage, and Lucio will make sure D.Va’s health doesn’t fall a lot.

How to create a winning team comp in Overwatch 2

If you’ve played the last installment of Overwatch, you may already be familiar with how quickly the game throws challenges at you.

To survive, you need to have a team composition that makes sure that it uses the best of its abilities and encounter every threat. A well-composed team is vital to climb ranks or ace the Quick Plays.

Although it can get overwhelming with so many great characters to choose from, some of which have been enhanced and reworked in Overwatch 2, it is still crucial you convince strangers or friends around you to team up with you for comps to get mutual benefits.

Just like the variety of players, there are various comps players can pair and mix-match to create a team that will work better in different situations, areas, and maps.

You have to ensure that you select Heroes according to the requirements of the particular situation and map. Snipers are best to keep in your comp if you are playing on high grounds.

Not just look for the best heroes; make sure they work together well. Each hero you select has to cover the weakness of other heroes. Don’t go for all high-tier heroes; instead, look at your needs and the hero who can serve them best.

If you have high-tier heroes, best at what they do, but they don’t mesh together correctly, it means you have a weak team.

If you are playing the default role queue in OW2, your team comp will consist of one tank, 2 damage dealers and 3 support characters. There is no such compulsion in open queue but the maximum player count remains 5v5.