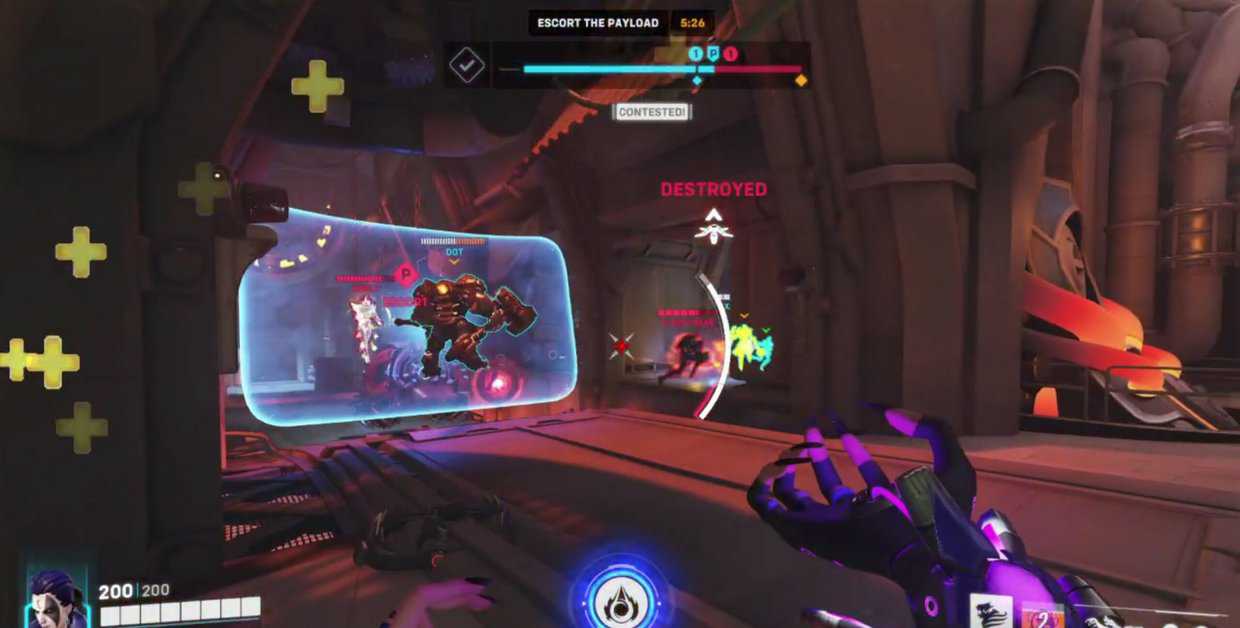 Meta are the current most used OP heroes with the highest chance of winning battles while playing together. Overwatch 2 changes like 5v5 have affected the best meta significantly.

Most players were using a team of 6 Heroes and confidently winning different battles. But now, in the reworked Overwatch 2, even experienced players are having trouble making a great comp.

To address this issue, we have prepared this Overwatch 2 Meta guide so you can get details about the current meta and strategies you can follow to win fights.

Do keep in mind that since Overwatch 2 just came out, the current best meta can’t really be judged so quickly. The OW2 meta mentioned below are basically tweaked versions of Overwatch 1 but they should still be viable to some extent.

In the Rush comp, some of the best meta options available for us in Overwatch 2 include Reinhardt, Symmetra, Junker Queen, and Lucio. Keep in mind this meta has 2 tanks so it’s only viable in open queue and arcade.

And the success of this rush playstyle also depends a lot on Reinhardt who needs to be what is commonly referred to as “W player”. A tank who just holds shield and keeps walking forward without any thought to the flanks.

If you are interested in a more competitive OWL type of meta for Overwatch 2, you can swap out Reinhardt with Junker Queen, add Genji and Brigitte to the roster and you are good to go.

Junker Queen’s whole kit revolves around mobility and buffing up nearby allies with health and speed boost so she combos well with Lucio.

Symmetra will allow you to teleport the team right in front of the opponent team. Getting close to the enemy is critical in Rush comp, and nobody does it better than Symmetra.

While Symmetra’s teleporter may not as powerful as before, it can still allow for quick repositioning.

This comp is best if you are playing on the Ilios or Busan map. Junker Queen is serving a good tank role because of the brawling aspect, and if you team her up with Lucio, the speed will double.

The team composition uses the cooldown abilities to target the enemies’ supports. We have fewer Tanks, so if you plan correctly, you can quickly get to the enemy back line by diving.

If you take out one of the support earlier, it will get tough for that team to tackle the situation, and you will have the upper hand.

You can use fast and close-range Tanks like Winston to do that job for you in Overwatch 2. Winston is also the best Hero of the comp since the dive meta emerged in Overwatch.

Even after some changes in Overwatch 2, he is still a good choice since you can use its Tesla Cannon and jump ability to dive quickly to the support.

Winston also offers a dome shield that can help you block attacks aimed for support players.

The other hero you can use in this comp is D. Va. You can use her Ultimate and rocket boosters abilities to get to the back line of the opponent team.

Alternatively, you can also go with the Doomfist, as he is a tank now in Overwatch 2. He is a fast hero with some significant burst damage.

After practicing a little with him, you can turn him into one of the best dive tanks in Overwatch 2.

Now for DPS dive comps, the heroes with significant damage and speed, like Genji and Tracer, are the best.

However, Genji is little struggling to find a place in the meta because of the rework done in the latest edition. So choosing Sojourn and Sombra is an excellent duo option available.

Sombra can get into enemies’ backlines and disable their healers. At the same time, Sojourn’s high speed and damage potential will allow you to do much damage to the frontline.

This duo with a high-damage tank or healer is great comp to use in Overwatch 2.

For support, Lucio is the best one you can choose from the current Overwatch 2 meta. He has insane speed and mobility, and if you can combine them with Ana nano-boosted attacks, it is a huge bonus.

Though shield comps are not getting used much in Overwatch 2 but still if you are playing on Control/Payload maps, Sigma is the one you should go with.

Sigma Shield doesn’t lower his ability to deal some good damage so going with him is a good choice. He will deal damage to enemies coming at him.

Teaming up Sigma with Ashe will allow you to use the hitscans in a long range. However, this comp is map-dependent, so don’t try it on all maps. If Ashe isn’t your playstyle then you can even opt for Sojourn, especially on Control maps thanks to her damage output and the high chance of one-shotting sub-200 health enemy heroes.

Mei is also a good pick for maps like Lijang Tower to wall off areas. She an even block enemy players in tight spaces for an easy pick thanks to her boosted damage after the rework.

Overwatch 2 meta is evolving consistently, so heroes and comp may not work as they are now. It would help if you always stayed up-to-date with the meta to have the best comp.