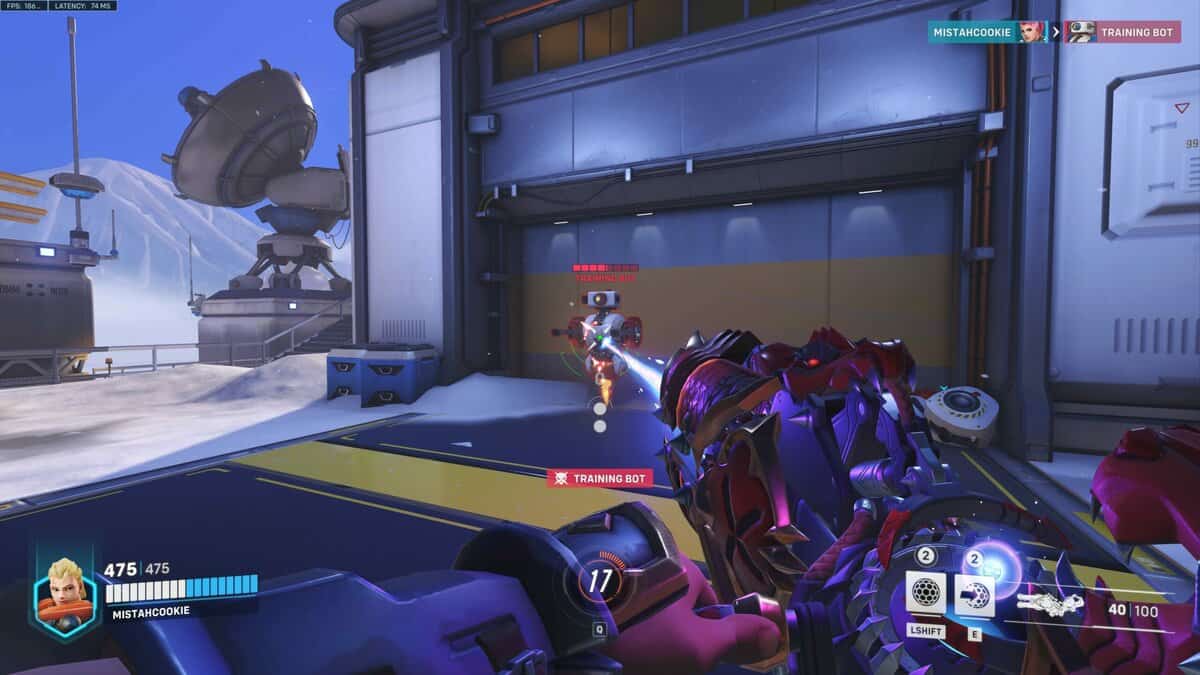 Tank is one of the three classes in Overwatch 2, and it features a few of the most powerful and bulky players in the game. Tanks are known to be the core component of any team composition, and they take the role of leaders that help their DPS and Supports to navigate the battle on the field and collectively use their abilities to maintain the synergy and bring the trophy home.

In this OW2 guide, we’ll be walking you through the top 5 best Tanks for this month and provide a tier list that ranks each class character. So without further ado, let’s get started.

Now that you know our ranking for the Tank heroes in OW2 from S to C tier, let’s look into our top five picks for best Tanks and why we love them.

One of our first picks is Zarya, who also holds the S-tier spot. She’s one of the best Heroes you can use as a tank in Overwatch 2. She is the most muscular woman in the world, and her abilities are no different.

If you’re just starting your OW2 journey or have read some blog posts about it, you must already be aware of the reworks the game has gone through, and Zarya especially has received some buffs in the new installment. She’s dangerous with a decent health pool, allowing you to use her the most in your team comps and smashing enemies.

You can use her Particle Barrier to generate energy while enemies are firing at your team. While placing this barrier on teammates, you have to be careful.

You may not be able to place a barrier on the teammate again, so make sure to use your team to give backup.

For the second-best tank, we have picked D.Va. She is another strong hero in Overwatch 2 that you can also use as an all-rounder. You might be thinking, what makes her take the S-tier spot when she has slow mobility, well, here’s the deal.

Irrespective of how slow she moves on the field, she has heavy-duty weapons and abilities that make her the ultimate powerhouse for any team comp. Sure, we’d love her to move fast, which can be fixed by putting her up with higher-speed teammates to keep things running smoothly.

Like Winston, she can take on the enemy’s support by diving. You can use her Defense Matrix ability to defend your team for three seconds.

If the situation changes, she can suddenly get into an aggressive mode and help your team get out of trouble. She is a great tank that can provide you with more value.

use your team to give backup.

Winston is the best tank when it comes to mobility. He can jump into fights even from long distances using single leaps and take the fight to the enemies.

General barriers cannot stop Tesla Cannon’s ability of Winston, making it deadly for enemies having low health. Additionally, he can disrupt the enemies by constantly harassing them using the boost provided by the Jump Pack ability.

Winston’s bubble-shaped shield is among the best in the game. He can use his Barrier Projector ability to defend himself and his teammates by providing protection.

His health boost due to Primal Rage allows him to jump into the enemies and deal massive damage using melee attacks, as Primal Rage converts Tesla Cannon into melee attacks and his cooldown on Jump Packs also reduces.

Winston can block damage for his allies and, through his barrier, blocks the line of sight for the enemies, opening the winning opportunity for his team. Ana will be useless if her line of sight is blocked, and Winston can land his combo to eliminate squishy targets like Ana.

The ability to land perfect combos comes with practice, and you need much to get hold of this beast of a tank. If you play Winston right, then there’s no stopping you from winning the game.

Sigma is excellent at covering the weak points of your team’s defenses, and he also puts a lot of pressure on the enemies from a range. Sigma allows his allies to use his shields and fire on the enemies from off-angle safely, and if the enemy attempts to dive in, he can use his Kinetic Grasp to survive the attacks.

You can use Accretion to interrupt the enemies’ abilities and leave them more vulnerable or not allow them an aggressive stance in the fight.

Sigma Experimental Barrier is great for clearing enemy-laid traps such as the mines of Wrecking Balls ultimate. If you place the barrier in front of Pharah, she might die from the splash damage.

The best way to play Sigma is to plan ahead of the fights and play your cooldowns precisely. Protect your allies using the experimental barrier until you have Kinetic Grasp ready. Then, drop the barrier and absorb all the incoming damage to allow yourself and your allies a perfect aggressive play.

Sigma’s strength also lies in his self-survivability and self-sustainability. Using his shields, he can shut down many enemies, such as Widowmaker. All these abilities and the strength of Sigma make him one of the best current characters in Overwatch 2.

Next, we have Doomfist as one of the best tanks in Overwatch 2. Doomfist also secures the S/A-tier spot, and for all the right reasons. With the recent installment, Doomfist might have faced the most changes due to him being completely shifted into another class. From a Damage to Tank, Doomfist has upgraded into being an overall heavy-duty character in the game. He is strong and can take a lot of damage to defend his team as a tank.

While talking hits, he builds up a punishing hit that can destroy the target. Though his attack range is limited, try to keep him away from ranged Heroes.

You can’t use his weapons in a long-range encounter, so always try to stay close to the targets. But yes, you can rush in with him, and he can lead your team to victory if appropriately utilized.

Another top pick on the list is Reinhardt, a great choice for those who love playing in defense. This big guy doesn’t only possess tough looks but also delivers powerful attacks that can exhaust the enemies out, eventually giving them headaches that will make them want to quit.

He gives great protection to his team comp, and with his Rocket Hammer, you best believe this guy will be delivering heavy damage from close distances.

Moreover, Reinhardt is great at dealing with serious assaults and pushing forward and can totally surprise enemies with his dash attacks. As a result, he’s a great choice to have as your team’s main and only Tank in this new installment.

Last but not least, we have Orisa. She’s a queen and everything you need in a tough team comp. Like Doomfist, Orisa has also undergone major changes in the game.

Although Orisa has lost her shield and the power amplifier ultimate, she has been granted with something better. Orisa now has crowd control abilities that make her a massive threat to any weak enemies nearby.

Although Orisa has suffered from a decreased health pool, her survivability now depends on her Fortify and Javelin Spin abilities. Using these abilities, she can push forward and execute rapid fires that can instantly chip away enemies.

Although Orisa doesn’t have a shield, she can directly block the enemies’ attacks, and with proper positioning, she can remain safe while carrying her comp forward to dominate the field.

Now that you know our top five picks from the Tank class, let’s see why they also make great beginner-friendly Tanks.

First, on the list, we have Zarya. We ranked Zarya as our top pick, and she’s also one of the most beginner-friendly Tanks in the game. Her outstanding performance might initially intimidate you and make you think that you must master first and use her afterward, but that’s not the case.

Among the community, Zarya is accepted as the most powerful Tank in the game due to her powerful barrier and abilities that shield her allies and make her a reliable team member.

We recommend equipping Zarya as a beginner due to her massive health. She has a base health of 475, 250 health, and 225 shields. As a Tank Hero, you must have enough health to ensure that you can move forward, dealing damage from the enemies while creating spaces for your allies to perform in and achieve the team objective.

Apart from her Particle Barrier and Projected Barrier, Zarya is great for aggressively killing and damaging her enemies with her explosive attacks, such as Particle Cannon and Graviton Surge.

Fourth on the list, we have Reinhardt. Another friendly beginner tank, we believe Reinhardt will assist you the best due to him providing a safe barrier for his team member and advancing at enemies with his Rocket Hammer. It gives a significant amount of damage to the enemies with coverage of a 5-meter cone in melee range.

With his Charge and Earthshatter, he can absolutely stun the enemies and can be used at any range. In addition, he’s great at taking down the opponent’s team support heroes, which is great for bringing the whole team down at once.

Using Fire Strike is also one great way to use Reinhardt effectively to throw a fiery arc projectile from his hammer that passes through shields and brings down opponents.

Last but not least, we have Orisa. She’s a great pick for you as a beginner due to her great set of abilities that allow you to crowd control and finish them off with her Terra Surge, an ultimate ability that pulls enemies closer to Orisa while charging a surge attack.

When it is released, it deals massive damage to the enemies and gives them an enormous setback.If you like clearing the battlefield, Orisa’s crowd-control abilities will serve you right. She can knock back enemies and avoid them to advance their attacks.

Orisa is super beginner friendly due to her being easy to use and her brand new skillset that guarantees great performance when used right.