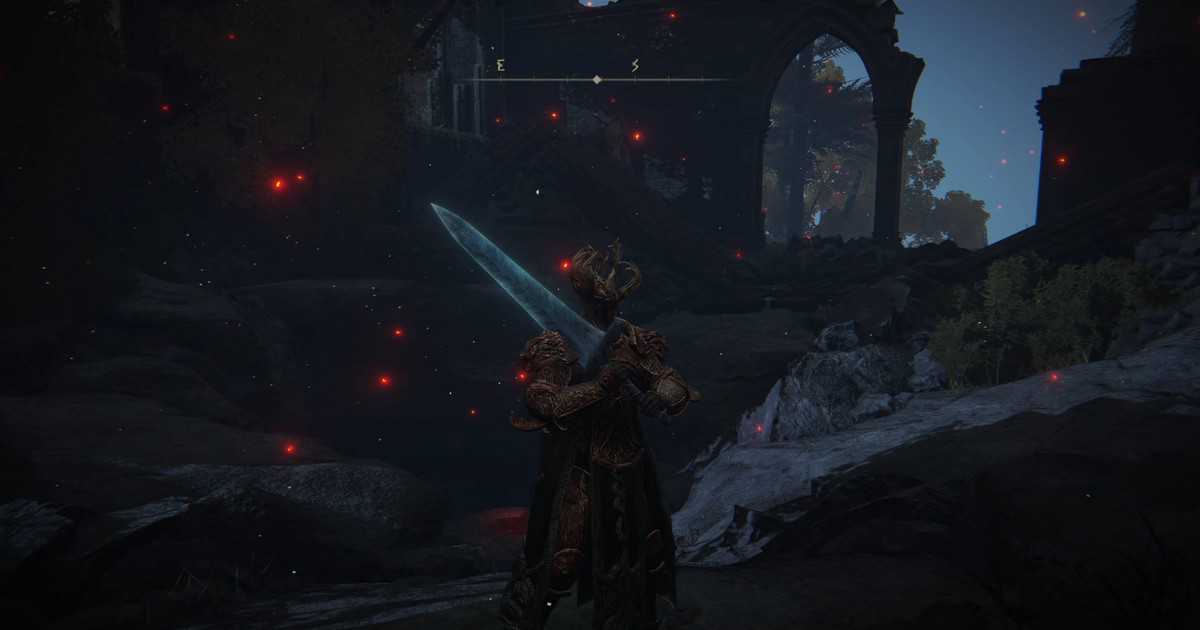 How to Get the Moonlight Greatsword in Elden Ring

If you’re looking for the perfect melee weapon to complete your melee-focused build, look no further. The Moonlight Greatsword makes your charged attacks extremely powerful.

That being said, obtaining the Darkmoon Greatsword can prove to be a lengthy ordeal. Finally wielding it though will make that grind worth it.

In order to get the Moonlight Greatsword in Elden Ring, you must complete a side quest for Ranni the Witch. This is the same individual who gives you the Spirit Summoning Bell at the beginning of the game, which you need to utilize Spirit Ash Summons.

To get to her, you must first proceed through the Caria Manor region and fight the Royal Knight Loretta mini-boss in northern Liurnia of the Lakes. After that just follow the road leading to Ranni’s Rise tower.

Ranni will gather the player at the top of her tower and ask you to locate the secret treasure of Nokron, Eternal City.

To find more about the situation, speak with Ranni’s other recruits, then travel to Limgrave’s southern Mistwood Forest and enter Nokron, Eternal City.

This opening will only appear if you beat Starscourge Radahn, as defeating him is the only way for a star to fall.

Once inside, explore the area until you uncover the Fingerslayer Blade, which is the hidden treasure. It’s beneath a gigantic skeleton statue in the Night’s Sacred Ground section of the area.

Deliver the Fingerslayer Blade to Ranni once you’ve acquired it, and she’ll tell you that she needs it to continue down her dark road.

She will then hand over the Inverted Carian Statue to the player, which they must transport to the Carian Study Hall in eastern Liurnia of the Lakes.

Interact with the moon model on the temple once you’ve entered. The Inverted Carian Statue will be used to flip everything in the Carian Study Hall upside down and rearrange the model’s configuration.

Enter the new doorway in front of you and slowly drop down the tower by jumping down the rafters. You’ll be taken up to a bridge by the elevator.

Cross that bridge and enter the Divine Tower of Liurnia through the entrance at the end.

Now enter the building and take the elevator to the top. You’ll see Ranni’s body after you reach the top. From the body, take the Cursemark of Death item.

Return to Ranni’s Rise’s location, however, this time enter the Renna’s Rise tower to the northeast. Use the purple teleporter to go to the top.

This will lead you to the Ainsel River’s northern section which will be under the ground. Pick up the Miniature Ranni doll from a neighboring casket when you arrive, and then you can relax for a bit at the Site of Grace.

Select the “Talk to Miniature Ranni” option multiple times during the time when you’re resting.

Getting the Discarded Palace Key

After you select the option, Ranni will reveal that the doll stores her soul and that she requires you to reach the Nokstella, Eternal City, and fight the Baleful Shadow boss. This area is closely connected to Ainsel River North, so you can start your trip immediately.

The Baleful Shadow can be located in Nokstella, Eternal City, near the southwest corner.

Ranni will praise you and give you the Discarded Palace Key after the Baleful Shadow is dead. You’ll need it later, in the meanwhile, take the new path.

The Lake of Rot is located at the end of the path going out of Baleful Shadow’s arena. To exit the underground and complete your quest for the Moonlight Greatsword, sprint south through the lake, treating any poison damage you sustain along the way.

You’ll eventually come to a Site of Grace, rest there before continuing south to interact with the coffin on the edge of a waterfall.

You’ll be moved to a new location with a door leading to a boss battle. When you walk through the entry door, you will have to fight Astel, the Naturalborn of the Void.

Take the elevator on the north side of the boss area to the surface once you’ve defeated him. You’ll find yourself at Moonlight Altar. Take a break in the Grace Site.

There’s one more thing you need to do before you can return to Ranni to get the Moonlight Greatsword is to use the Discarded Palace Key.

Travel to the Raya Lucaria Grand Library Site of Grace. You’ll find a box in the chamber. Open the chest using the Discarded Palace Key to get the Dark Moon Ring, then return to the Moonlight Altar Site of Grace quickly.

After getting there, travel northeast Cathedral of Manus Celes while resting at the site of Grace inside. To the right of the Site of Grace is a hole in which you need to fall very carefully.

After getting into the hole, you’ll be in a room with Ranni’s body and Two Fingers. Now, interact with her and deliver her the Dark Moon Ring. The hustle now comes to an end and you’ll get the Moonlight Greatsword after a short while.

Ranni will thank you for your services and with a pledge of seeing you soon, she leaves with the Moonlight/Darkmoon Greatsword at the place of her sitting.

The Moonlight Greatsword is an incredibly powerful weapon that allows you to coat your swords with frost to increase frost buildup. In addition, the Greatsword throws moonlight blasts at enemies that deal a lot of damage.

The increase in overall damage makes the weapon an important part of your build. Hence, the weapon is worth the trouble that players go through Ranni’s questline, specifically for the sword.

Below are the stat requirements to wield the Moonlight Greatsword