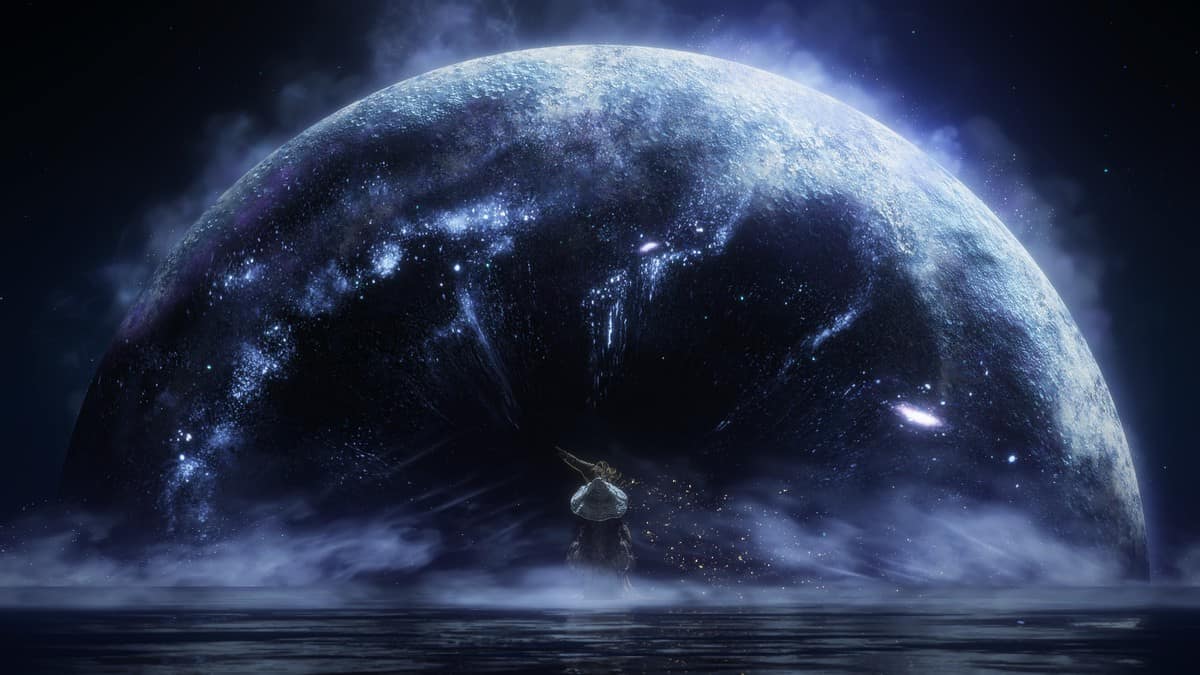 Academy of Raya Lucaria is one of the Legacy Dungeon that is quite different from other areas of the Elden Ring. This Walkthrough will give you complete details about the Academy of Raya Lucaria, including the challenges you will face here, loot you can collect, and enemies you have to defeat.

To enter the Academy of Raya Lucaria, you need to go through the main gate. After reaching the main door, you will see that a barrier locks it, and you will need the Academy Glinstone Key for unlocking it.

You can collect the map coordinates for the key from a corpse close to the main gate. You have to go to an island shown on the map above to collect the Academy Glintstone key.

There you will see Glintstone Dragon Smarag right in front of the place where you have to collect the key. But don’t worry, you can easily sneak to its backside by going around the rocks and moving slowly.

There you will collect the Academy Glinstone Key from the corpse of the Lucaria Sorcerer. Once you have the key, return to the Academy’s main gate, and you can enter it.

After entering the Academy of Raya Lucaria, you will get to the Academy Gate Town site of grace. You can check the northeast section there for collecting the Golden Seed near the glowing sapling.

When you look forward, you will see a couple of Poison Pods. Above the Poison Pods, you will spot a Teardrop Scarab hanging on the wall.

You will get the Ash of War: Charge Forth if you kill that Teardrop Scarab.

Church of Cuckoo Site of Grace

Move forward and explore the graveyard section once you’ve unlocked the Church of Cuckoo Site of Grace. The graveyard is filled with the Glintstone Zombie. Clear that area and after that get to the other side and find a wooden bridge there.

Cross that bridge and turn left. There you will see a path below. Drop down and circle that area, and you will encounter two Marionette Soldiers. Take them out, and after that, you can collect the Marionette Soldier Ashes from the corpse of a soldier in front of you.

After that, you can continue moving through the graveyard, and when you reach the doorway, turn left. Here you will find a path with a torch and encounter a Teardrop Scarab that you can kill for collecting the Ash of War: Spectral Lance.

Now get back to the doorway and enter it. It will take you to the next section, where you will find a rotating lift. Just after entering this area, turn right and get to the wall. From the end, drop down to a path below.

Where to Find Carian Knight Set

You have to continue forward around this narrow path, and you will encounter some more Glinstone Zombies. These Zombies are worshipping a large tomb there. You can kill them all and collect the Carian Knight Set.

After that, again, get back to the rotating lift and, this time, head straight towards the statues and a monolith. Please get to the monolith and kill the Slender Wayfarer guarding it. You can collect the Smithing Stone from the monolith and Gravity Well Sorcery.

Now get back to the huge rotating lift and ride it to reach the lowest section.

After reaching the lowest section, you will encounter the Pendulum Statue enemy there. First, you have to defeat that enemy, and after that, you can loot the corpse here to collect the Longtail Cat Talisman.

Gain, get on the lift, and go all the way up. After reaching the top, you can move forward along the way, and you will enter the Schoolhouse Classroom site.

You can go towards the hallway and enter the first room on the left side from that site. Here you will find a corpse that you can loot for collecting the Conspectus Scroll and a treasure chest containing the Glinstone Craftsman’s Cookbook.

In front of the body you just looted, there is a door. Hit it to reveal the Illusory wall. It will take you to a balcony from where you can collect the Smithing Stone from a corpse. Jump down from the balcony and follow the path on the left side.

Follow the narrow sideway and loot all the items you find in the way. There is a body here that you can loot for the Olivinus Glintstone Crown.

Explore the hallway and note that Raya Lucaria Sorcerers’ enemies have a chance to drop the Academy Gintstone Staff, so make sure you defeat them once you encounter them.

Go towards the end of the hallway, and you will encounter the giant Living Jar. Kill it and open the chest there for getting the Ritual Pot.

Get to the second floor, and the Raya Lucaria Sorcerers guard it. Here get to the balcony again and collect the Furcalling Finger Remedy from a corpse there.

Get to the third floor after that and go through the mist door for fighting the Red Wolf of Radagon.

This wolf is a little tougher than the other enemies you have encountered. He has some projectile, claw, and combo attacks. He can also summon a magic sword that he swings with his mouth for dealing damage to the enemies.

All of these attacks are not difficult to dodge. You can dodge them and hit him with a couple of powerful attacks. Just continue doing that, and you will be able to defeat him in no time.

You will be rewarded with a Memory Stone and 14000 Runes for defeating the Red Wolf of Radagon.

You will find the Debate Hall Site of Grace in the same arena.

Exit through the doorway, and you will enter the courtyard of the Academy of Raya Lucaria. Right after entering the courtyard, turn right, and jump to the other side of the fence.

There you will see a ladder in front. Climb through the ladder and enter through the broken glass window. This is the second floor of the Debate Hall.

Go towards the left side, and you will find a body there that you can loot for Crystal Bud. Then, head back and find a chest that you can open to collect Radagon Icon. After that, head back to the courtyard section and explore it.

You can find the Stonesword key from a fountain here. Go around the courtyard, and you will find some more collectible items. Head west of the courtyard and kill the Noble Zombies close to the glowing sapling.

After killing them, you can collect the Golden Seed from the ground. Three Crystallized Crab are hiding in the corner in the West, and you can kill them for getting the Karolos Glintstone Crown.

Once the west side of the courtyard is cleared, you can get back to the courtyard’s center. Close to the fountain, you will see a slope with lots of enemies on top of it.

You will need to kill all the enemies there and enter the small room behind the kneeling zombies. Here you will find a hanging body on the balcony, and there you can find the Glintstone Whetblade.

After that, head to the rooftop section of the Academy to check everything there for collecting some loot. You can collect the Imbued Sword Key from a corpse from the towering building here.

Here you will find another broken glass window that will lead you back to the ceiling of the Church of Cuckoo. Collect the loot from the body on the beam here and drop down till you get to a chandelier.

Here you can collect the Academy Glintstone Key from a corpse.

Second Floor of the Academy of Raya Lucaria

After that, you can jump to the second floor and clear the area from Raya Lucarian Sorcerers and Lazuli Sorcerers.

After killing the enemies here, you can head to the northwest section. There you will find a corpse against the wall for collecting the Shattering Crystal.

After that, go towards the east side, and you will get to a balcony. Check the right side for finding the Crystallized Carb. You can kill it to get the Twins Glintstone Crown.

You can also spot a doorway here that an enemy guards. Kill that enemy and get inside to find the Azur’s Glintstone Staff on the ground.

Once the second floor is cleared, you can unlock the shortcut to the Church of Cuckoo Site.

Back to Courtyard Area

Get back to the courtyard area of the Academy of Raya Lucaria and go east. Here you encounter a large iron ball trap. You can loot the bodies on the stairs here for collecting the Crystal Dart, Smithing Stone, and Furlcalling Finger Remedy.

Move forward and enter the next section, and there you will encounter the Moongrum Carian Knight that is guarding a lift.

That lift will take you to the main boss of the dungeon. You can beat that boss for getting the Carian Knight’s Shield.

Before entering the lift, you can check the west side close to the gate. From there, you can jump over the fence after walking the narrow beam of the wall.

There you will see a ladder that you can climb. After that, you can defeat the Lesser Pumpkin Head and Raya Lucaria Sorcerers.

There is a chest as well that you can open for collecting the Glintstone Scarab. Get back to the lift and get ready to fight the boss.

How to Defeat Rennala, Queen of the Full Moon at Raya Lucaria Academy

Rennala, Queen of the Full Moon, is the second Elden Lord most players love to fight. She is a Sorceress, and the fight with this boss has two phases.

In the first phase, she will be floating around in the air, and her minions will attack you from the ground. She will be throwing books and fire at you. Look for the minion who is singing and take him out.

After that, another minion will start singing, and you have to kill him. Continue doing that, and once you have taken out three singing minions, the protective shell of Rennala will break, and she will fall to the ground.

Attack her before she again gets into the air. She will be using a magic explosion before rising in the air again, so watch out for that. Continue doing that till her health drops and the second phase of the fight starts.

In the second phase, she will be using her full arsenal of spells, so be very careful. She has a lot of spells. You will need to have a good look over her so you can land some hits after she attacks you with a spell. You have to cash in every opportunity you got.

After her health bar is close to half, she will start to summon spirit allies to help her in the battle. The best you can do is run away from there for some time till spirits are there, as you can’t dodge the attacks.

Use the small window you get between spirits vanishing and reappearing to attack her with your most powerful attacks. Just continue doing this, and eventually, you will defeat her.

You will be rewarded with the Remembrance of the Full Moon Queen, 40000 Runes, and Great Rune of Unborn.

After the fight, you will return to the original boss area where you can speak to her if you have the Larval Tear for changing your appearance and respec your character.