Rennala, the Queen of the Full Moon, is one of the demigods that you will encounter in Elden Ring. She’s one of the many shardbearers whom you’ll go up against in order to advance any further into the story in Elden Ring.

However, before going against the queen, there are a few things that you should be aware of. The following guide will cover everything related to the Rennala boss fight in Elden Ring.

Rennala is a mandatory boss and hence, a requirement to progress the main storyline of the game. However, she’s not mandatory to be defeated in order to advance to the next area and can instead be faced off in the later stages of the game.

Below is a map that shows the exact Rennala boss location in Elden Ring. 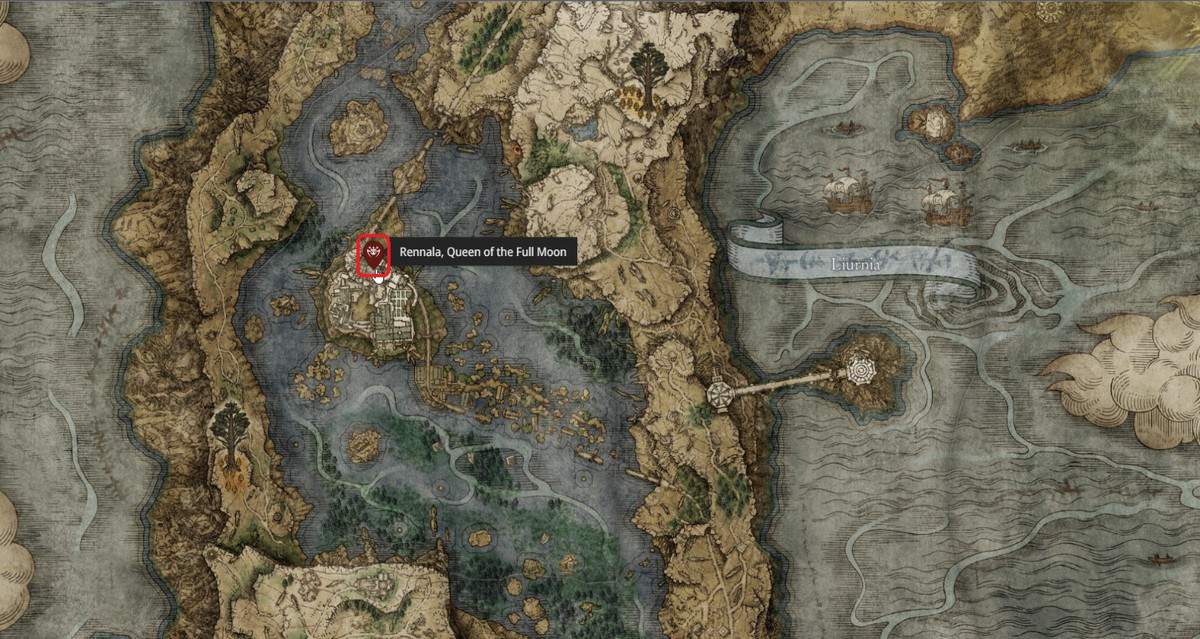 Rennala, Queen of the Full Moon Recommended Level and Weaknesses

The Recommended level for Rennala, Queen of the Full Moon, is 40. There are a few weaknesses that will help you in attacking Rennala in the most efficient manner. You can use Skeletal Militiamen Spirit Summon; Skeletons can be devastating because they can self-resurrect.

You may also use brawn vs. brain since Rennala is very weak towards Slashing, Striking, and Stabbing attacks. Choose warriors and melee fighters that have resistance towards Rennala’s spells.

Rennala is easy to stagger; therefore, heavy attacks will help you interrupt her if you use them strategically.

Rennala, Queen of the Full Moon Attacks and Counters

Following are the attacks and counters used by Rennala during the first phase of your fight.

Rennala will unleash a flame attack with the help of a Juvenile Scholar. You can dodge this attack by simply running away to the side.

Rennala will suspend some scholars into the air and then transform them into Tomes. These scholars will begin to chase you, so you must dodge them.

If you are close to a scholar, then it might use its head to attack you. You must stay away from the scholar to avoid this type of attack.

Another way a scholar can attack you is when it raises a globe on a stand. You must run to your side to dodge this type of attack.

During phase 2 of your fight with Rennala, she will use the following attacks.

She will use the Comer Azur to cast a strong horizontal energy beam. You must roll to your side to avoid it.

Another attack that she uses is called the Glintstone Stars, and she will use her staff to drop 4 energy drops from above her head. You must roll in the forward direction to avoid them.

She will use the Shattering Crystal to launch a burst of energy with her right hand. You can dodge it by rolling toward your right.

Rennala’s Full Moon spell is a Sorcery that summons a moon for her to hide behind before jumping toward you. This moon explodes after some time; you can avoid it by running away from the moon.

Rennala can also summon some creatures such as a Troll, a Bloodhound Knight, a dragon, or a pack of four wolves. You can make them run in circles around Rennala to gain distance from them and attack Rennala.

How to Defeat Rennala, Queen of the Full Moon in Elden Ring

You can decide your approach against Rennala based on your preferred playstyle.

During the first phase of the fight, Rennala is floating on a bubble. The room is filled with a good number of students.

Punish Rennala once she is on her knees. She will emerge again, and you will have to be fast to block her AOE attack this time.

She also raises a few students to sustain her bubble. You must repeat this process multiple times until a short cutscene is triggered, which marks the start of the second fight phase.

The second time around, Rennala is basically fighting against herself. She will cast a few spells and blast powerful energy cannon towards you.

Beware of her summons once she hits her staff on the ground. You’ll observe that a pattern will be drawn on the water, and a creature will appear. Look out for a Giant named Bloodhound Knight Darriwil as well as a Dragon.

In phase one, use a Bow to simply take down the students with Physical damage.

In the second phase, use melee attacks if you’re a mage and Bow if you’re an Archer. Repeat this pattern and take down the boss.

Rennala is resistant to magic, and you must use Rock Sling to take advantage of her vulnerability. You must use a sword to take down the students.

As phase 2 of the fight begins, spirits can be very helpful since they distract Rennala. Using a Rock Sling and a Meteorite Staff to take her down are good options as well.

Rennala drops 4000 Runes, Remembrance of Rennala, and Great Rune of the Unborn once you have defeated her.

How to Cheese Rennala, Queen of the Full Moon

If you’re someone who wants to get over with this boss, fight as soon as possible, without the usage of any kind of magic; here are a few tips that will help you.

First of all, during the first phase of the fight, to get Rennala out of her bubble, you need to look for a student on the ground with a glowing orb around them. Hit this student to break the aura/spell; look for more of these students.

Once you break the spell, Rennala will fall to the ground. You must hit her till her health depletes to half, and then she’ll start casting some attacks that you must dodge. Rennala will rise again, and you must repeat the same steps.

During the second phase of the fight, you must keep your distance while constantly attacking Rennala to build pressure on her. Use long-range weapons such as the bloody slash ash of war to finish her off while maintaining your distance.

Keep in mind that, there isn’t any available NPC summon during the Rennala Boss Fight in Elden Ring. It’s recommended to use the Godrick Soldier Ashes or Lone Wolf Ashes to prevent Rennala from casting any spells. As for your spirit summons, you can use them during the second phase of the fight for a decent impact.

What Happens if You Accept Rebirth from Rennala, Queen of the Full Moon

After defeating Rennala, if you choose “Rebirth” during your conversation with her, all of your character’s level and attribute points will be reset, and you’ll be back at square one. To get back to your current level in the game, you will have to re-allocate your points.

Once you choose Rebirth, you can respec your character in return for a Larval Tear, a unique item.

How to Open Locked Treasure Chest Behind Defeated Rennala

You can unlock the locked treasure chest behind Rennala with the help of Rennala’s Chest Key called “the Discarded Palace Key.” This key is given to you by Miniature Ranni after you have defeated the Baleful Shadow.

Rennala is the final Carian Queen who is locked inside the Grand Library. She is protected by her scholars/students inside the library. She is not a demigod, but she is one of the Great Rune bosses that you must defeat to attain her Great Rune and Remembrance.

Great Runes are pieces of titular that can be restored to attain several benefits upon equipment. Remembrances can be turned into useful weapons.

Rennala’s Great Rune of the Unborn cannot be equipped, and you won’t have to activate it. This Great Rune gives you access to the Rebirth option.

Many Elden Ring players have faced the “Rennala Queen of the Full Moon undefeatable in co-op mode” bug. Here are some solutions that will help you work your way around this bug.

Rennala is undefeatable in this bug because one of her students who must appear with a barrier during the fight never appears. This causes the players to be stuck in an endless loop of killing other students.

You can switch to single-player mode to avoid this bug to face the boss instead of the co-op mode.

The bug typically occurs when people start summoning. It would be best for you to enter the boss fight without waiting for the people to fully load in.

You can also restart the game once this bug occurs, as it might solve the issue in some cases.