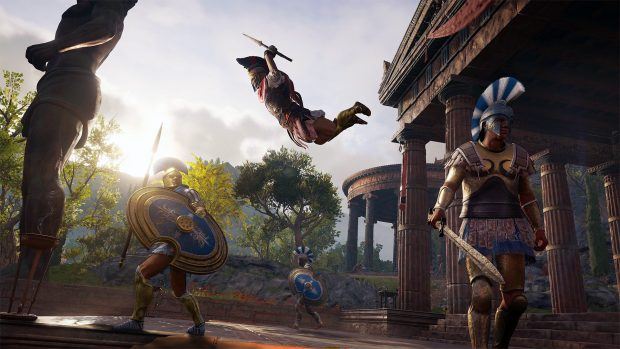 If you know anything about the Assassin’s Creed series, it is probably the fact that there are more than one ways of going about a situation. Going full action and engaging enemies head-on is not as rewarding as diffusing situations stealthily, living up to your title. Below, we have highlighted all the ways you can make your Assassin’s Creed Odyssey Stealth game even better and live in the shadows undetected and unseen.

Although going all-violent with those powerful weapons and badass movement in battle feels way more exhilarating than hiding in haystacks, some objectives are far too difficult to handle with such a strategy.

We are talking about scenarios where you may have to infiltrate a base that is riddled with high-level foes. That is why you should not keep stealth combat at the back of your head but it should be your go-to strategy.

You can find safe spots to hide in the traditional ways i.e. haystacks, bushes, grass, and structures high above.

Moving while crouching is really the best option as it lets you traverse as quietly as possible. Sticking to the shadows and choosing to carry out missions in the night will ensure that you are not easily detected – even in open fields and areas.

Furthermore, in order to let things go on smoothly, go for the safest options to kill by luring enemies toward you, one by one.

This is carried out by the dedicated button for whistling. With such a technique, what you’re essentially doing is separating groups of enemies and taking them on one at a time for the best results.

Once you have come close enough to a foe, silently deal with them in one blow, otherwise, risk an alert going around the entire camp leaving all your hard work useless.

Use assassinations for this purpose or if you are going for an alternative; a really powerful weapon to ensure the enemy goes down in one strike.

Of course, even when you employ either of the two methods, there is a chance that enemy might still not go down.

This happens when the enemy belongs to a much higher level compared to you. Always check the color of their health bar that, if it is white, you need to inflict extra damage.

In case of partial detection or suspicion, the enemy is marked with a yellow icon above their head that turns red as soon as they catch a glimpse of you.

If you are a little clumsy and are seen in the yellow status, find a bush or something to hide in immediately. Remember, these status changes only occur when you get close or in the radius of the enemy’s sight.

For this very purpose, it maybe best that when you approach scenarios stealthily, use a bow from some distance. When you are aiming for the head and know that one shot will eliminate the target, can you find a more perfect version of stealth play?

Even after you’ve dealt with some of the enemies, it’s imperative that you make sure that the stealth section lasts throughout, right till the end, until you get to your target or achieve your main goal. Hence, always hide bodies in haystacks or other hiding spots to eliminate any chances of suspicion amongst the comrades.

Using Ikaros for Recon
This should be your first step towards tracking all enemies before you actually infiltrate an area.

Just like its predecessor and how it was so important in Metal Gear Solid V, use your eagle named Ikaros to do the job, the eyes from the sky. You can press the up button the D-pad on the controller for that purpose.

After you have marked them, you can move more safely knowing where the enemies would be. You would even find it helpful to use them for your own team should they have good stats.

Upgrading Skills for Better Stealth
Since most of your success depends on if you will be able to take enemies down as quickly and swiftly as possible, upgrading skills is essential.

The Rush Assassination, if sufficiently upgraded, will let you throw spears quickly and without detection, towards a group of enemies. The higher the level of the skill, the more chain throws you can perform.

The Critical Assassination utilizes your Adrenaline bar to deal an extraordinary blow of 200% of Assassin Damage.

This is a charged attack that works best against a stationary enemy and will even put down powerful ones that cannot be eliminated with a single blow.

As your bow remains an important weapon of destruction in stealth situations, it is essential you upgrade it.

The Predator Shot, Devastating Shot, and Overpower Bow Strike all carry characteristics of dealing immense damage from far out. Others will cause explosive damage. Utilize these abilities to the fullest.

This is so far everything we have in our Assassin’s Creed Odyssey Stealth Guide. If there is anything else that you would like to add, let us know in the comments section below!