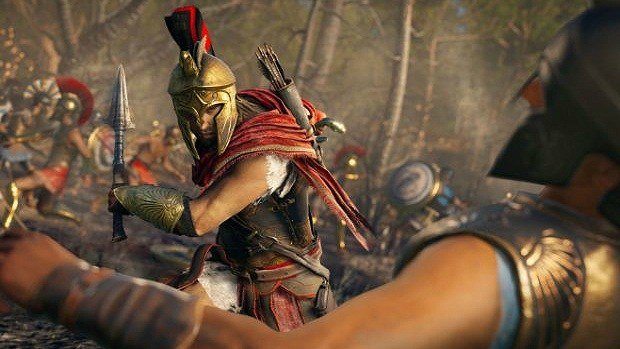 Atlantis is a secret area that you can discover while going through the game. There are many monsters there for you to kill which net you some very decent rewards and our Assassin’s Creed Odyssey Atlantis Guide will get you those rewards with relative ease.

In order to unlock Atlantis, you need to beat the Main Quest known as United Front in the Story Sequence 7. This will automatically trigger a side quest known as A Family’s Legacy.

This quest will unlock Atlantis for you. In order to figure out how to complete this quest, look at our Sidequests Guide. Let us go ahead and look at how you can beat some of the main bosses that are in Atlantis.

During the quest known as Stairway to Olympos, you will come to the Isle of Thisvi. Head to the temple and swim through the pool to find and defeat Empedokles. This will begin the fight with Cyclops.

At first, you need to dodge all of his charges as well as stomps. Make sure you stay near him but to his side as he might slam you into the ground if he gets a hold of you.

Halfway through the fight, he uses some of the terrains around him as a weapon. You must dodge all of his attacks and not try to parry since he has a lot of durability and you will be wasting your time for the most part.

Try to use your arrows since they stun him and then deal damage to him. Make sure you keep on dodging and damaging until he falls down and you can rip his eye out.

During the questline which starts with Myths and Minotaurs, you will come face to face with the Minotaur. When you are caught in the maze, you need to find some rocks and follow them until you get to the Minotaur.

His attacks are very powerful and range from him swinging his axe to the ground pound that knocks you over. Once you get his health to around half, his attacks will become even more powerful and you need to be extra careful.

Do not run too far away from him, as he will charge you. Keep on attacking him and rip his horn off when he is dead to complete the battle.

During the questline known as The Lore of the Sphynx, there will come a time when you need to answer a few riddles. There are 3 questions from a pool of 12. Here are the answers to each of those riddles:

Once you have answered all 3 questions, a bolt of lightning will make the Sphinx collapse and you can recover the artifact.

The questline for Medusa begins with Romancing the Stone Garden and you meet Medusa during Writhing Dead. Remember that this is the hardest enemy to beat in the game so you need to be close to Level 50 in order to stand a chance.

Kill all of her allies first and then equip the sword of Damokles to fight her.

She has a laser that turns you into stone as well as mortars which have AoE damage. Dodge these and try to attack whenever you get the chance.

When she teleports away from you, she is vulnerable for a short amount of time so you can use your arrows.

Make sure to dodge if you are turned to stone. In order to avoid the lasers, you can hide behind the stone pillars.

Once she is down to a third of her health, she will have 4 allies join her which you need to defeat first before focusing on Medusa again. Keep on whittling her health down and soon, she will fall and you can retrieve the snake as the final reward.

That is all we have for our Assassin’s Creed Odyssey Atlantis Guide. Let us know if we missed something using the comments section below!