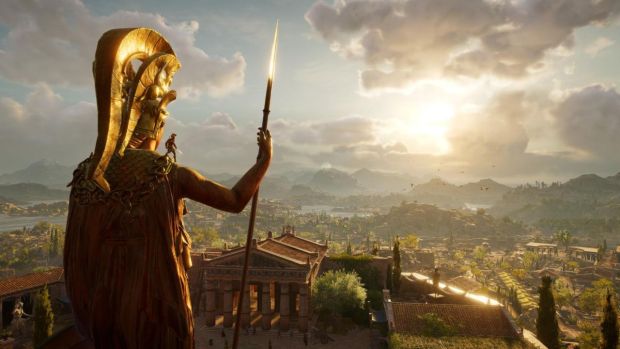 Since the old days of Assassin’s Creed 2 and Assassin’s Creed: Revelations, the combat mechanics are not just about countering attacks and lashing out. It is grown more varied and new systems have been introduced over the years to bring more depth to each battle. In AC: Odyssey, this comes in the form of parrying, using your Adrenaline Meter, and more. Our Assassin’s Creed Odyssey Combat Guide will get you acquainted with all ways you can maximize damage and get an upper hand on your opponent in battle.

Although most of the time you will be looking to deliver hits and think, “Hey man! Let us mash the f… out of these attack buttons” but that is not really the case.

If you are not blocking, dodging, or carrying out some other defensive measure, chances are you are not going to survive the remainder of the battle, especially against a tough opponent.

Dodging is carried out simply by pressing Square/X keys on the controller. Note this is like a sidestep action so holding down these keys will result in a rollover to evade enemy’s strike.

Moreover, the perfect dodge will slow down time and give you an opportunity to attack so it is always helpful if you can time your evasive abilities.

Making up for the absence of a block action, you can press L1 + R1 or RB+LB to parry the opponent’s attack as soon as it comes out. Look for a small white flashy indicator to time your parry.

This will create a window for you to deliver some decent damage. Regarding special attacks, you need to unlock them first in the Skills tab and then trigger them with L1+R2 or LB+RT.

The Advanced Systems in the Combat

Now that the fundamentals are out of the way, let’s look at bringing dynamism in combat and diffusing different situations.

Enemies with white indicators appearing on them as they strike can be dealt with by parrying/dodging. While red indicators imply an unblockable attack that can only be dodged.

In order to keep your focus on dealing with one enemy at a time, lock on the foe, and then switch around the targets with the right stick.

You can also make sure that the enemies are always tagged so it makes it easier for you to know where they might be. This is done via your eagle pet, Ikaros or through aiming a ranged weapon like a bow.

Chain your attack moves together and perform a combo by using a combination of light and heavy attack buttons. Remember, go for light attacks against agile opponents and keep the heavy ones for the armored and slow ones.

When your Adrenaline bar is full, unleash a devastating special attack. Good starting abilities are the Bull Rush, a charged attack to deal strong Warrior damage to the foe. It may also stagger opponents who are carrying a shield.

The other good ability is the Spartan Kick, as you would expect. It is very useful against enemies that can push from ledges, tower, and cliffs, etc.

Moreover, you can stun enemies in order to recruit them using the Spartan Kick. You can unlock more attacks and abilities down the line as you progress through the game.

There are three playable styles or classes in combat: Warrior, Hunter, and Assassin. Though previous games should just be focused on the third class, Ubisoft tried some different things and here we are with a more RPG focused game than Assassin’s Creed.

Anyhow, a Warrior makes use of the fancy swords, daggers, and heavy-handed blades to bring destruction upon the enemy while a hunter is focused more on the stealth and ranged aspect of the combat thanks to his bows and arrows.

The assassin, is well, the assassin. A being who only employs stealthy methods and works in the shadows to use his short blades or leap from ledges to deliver a killing blow from those blades that emerge from his wrists.

Each class is unique and what playstyle best suits you is the one you should go for. With that said, some situations may prompt you to use a different style than what you’d grown fond of so always remain in practice of all the three styles.

You can either opt for speed but low damage or go for devastating strikes albeit at the cost of mobility and strike rate. With these two concepts in mind, you can pretty much categorize each weapon into these two groups.

Daggers and Short Swords work best for fast maneuvers while maces, spears, or other heavy-handed weapons may sacrifice speed for damage. Use the latter against heavier enemies who are not so agile.

We have already talked much about bows and how they can be silent yet still lethal – even from far out. Thanks to the different varieties including poison, explosion and fire arrows, this weapon is a must for most of the situations.

Weapons can later be upgraded at the blacksmith with XP, materials gathered and even with the help of Engravings.

You can increase your weapons carrying capacity with the Man at Arms skill which allows for more slots in the inventory.

This is all we have in our Assassin’s Creed Odyssey Combat Guide. If there is anything else that you would like to add, let us know in the comments section below!