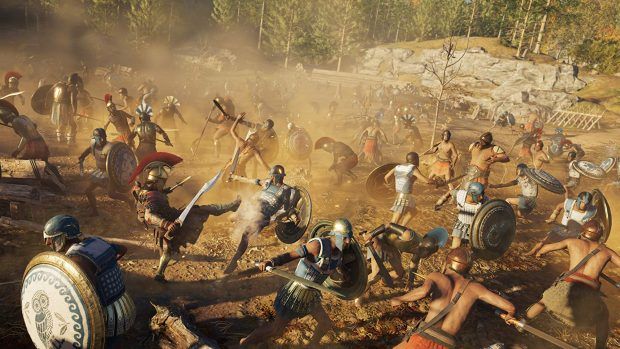 You will be able to see a Nation’s Power Meter when you open up the map. The more the meter, the more his people protect the leader. You can trigger the Conquest Battle by overthrowing the leader of the region.

You can find red forts around the region and take them down one by one. Burn their resources and kill the elite troops such as the Captains. Use Ikarus to find the resources. Attach them with your torch and they will burn.

If you are unable to locate the leader of a certain region (as it can be very hard to find him if the region is quite large, the best thing you can do is use Ikaros and scout the major city of the region.

Use your HUD radar to quickly locate the leader and then use that information to gauge how strong the current region is. The powerfulness of a region is determined by the level of the leader as well as the guards around him.

How to Win Conquest Battles

The red fights are much more difficult but they reward you with much better gear whereas the blue fights are easier than the red ones but the rewards that you receive are of much lower quality.

The objective that you receive in the battle is pretty much the same no matter which sort of a fight you are taking part in. The objective is to kill the opposing soldiers before they can do the same to you.

The meters that you see at the top of your screen during the battle are used to signify the strength of each army. The meter of the enemy will be red if you choose the blue fights and vice versa.

There are 2 options for you to decide from during the start of the battle. One of them involves defending whereas the other one revolves around attacking.

Remember that if you join the side of the nation that is attacking, the fight will be much more difficult but will also have much greater rewards for you to collect.

Defending is very easy comparatively but it has the cost of not giving you rewards which are that great upon completion.

If you want to be able to fight efficiently and end the battle quickly, there are certain things that you can do.

Your combat abilities are very effective in battle whenever they are fully charged.

This will allow you to deal a lot of damage and will have a huge effect on the speed by which the battle ends.

Remember that fighting the common soldiers is futile. Killing them will not have enough of an impact on the fight to get you the victory, which is why your sole target should the elite soldiers which are a part of the enemy’s army.

Defeating the hero will net you an unparalleled gain and thus, choose him as your highest priority target.

The second thing that is important in order to be done with the fight very quickly is to target the captains.

If you are able to take down the captains whenever you see them, this will have a huge effect on their meter and the fight will be over much more quickly than it would use any other method.

Winning the fight gives you epic gear which is consistent with your level. Attacking nation grants you 2 pieces whereas the Defending one grants you only 1.

That is all we have for our Assassin’s Creed Odyssey Conquest Battles Guide. Let us know if we missed something using the comments section below!