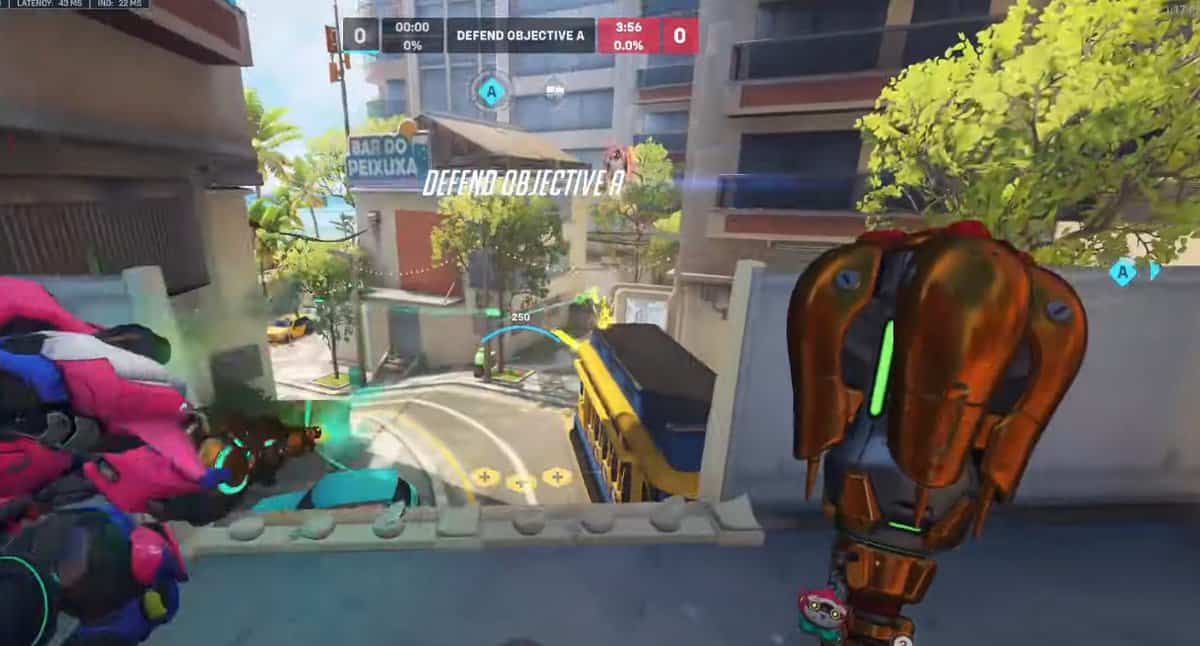 If you think that you don’t want to take up the front charge and start picking off enemies, support class in Overwatch 2 might be for you.

We have eight heroes in the support category in Overwatch 2, and you can choose to pair with any according to your team composition.

Ana’s Anti-nade, or Sleep Dart, is quickly followed by Genji to strike down the enemies. The mobility of Genji plays a significant role here and complements Ana’s abilities. Furthermore, Ana’s hitscan healing allows Genji to go further into the enemies and finish off the targets using his Nanoblade.

However, it is imperative to have good communication between the pair. Ana needs to position herself behind Genji, providing him with constant healing and landing Sleep Darts on the enemies.

Ana should position herself on high ground so she can provide cover to Genji and provide him with the opportunity to seize the enemy backline heroes.

There are several reasons behind this combination. Brigitte and Ana overcome each other’s weaknesses, providing their team with excellent support in every scenario.

Brigitte is excellent close-range support, but she suffers from a low healing rate; thus, Ana’s Biotic Rifle increases her healing output for Brigitte. Moreover, Ana can heal her allies from long range while Brigitte can support them from close range during the fights.

Rally and Repair Pack from Brigitte also provides Ana with much-needed armor and protects her from enemy DPS heroes.

Furthermore, Ana protects Brigitte while she tries to use Shield Bash or Whip Shot by using her Darts on enemies or providing healing. This combination is a must-have due to its high-level synergy.

This pairing is excellent due to their outstanding synergies with each other. Lucio overcomes Zarya’s weaknesses enabling her to deal maximum damage to the enemies.

Zarya‘s main struggle has no movement abilities, and this problem is overcome due to Lucio’s speed boost. Charged up, Zarya, with her bubble up and speed boost, will bring down any squish enemies before enemy tanks make their play.

Moreover, Lucio Ultimate allows Zarya to run through the enemy’s backline and use her ultimate to open the fight for their team. This combination will have enemies DPS and Supports running for their team.

This duo can bring the enemies to their knees if they stick together and play the game. Both heroes are Hit scan, and if they communicate correctly, flying or any enemies cannot escape their wrath.

Baptiste and Soldier:76 can maintain their aggressive high ground position, making enemies run away because of Soldier:76 heal pad. Moreover, Baptiste has excellent vertical mobility, and he can join Soldier:76 whenever he tries to set fights with the enemies.

Moreover, their ultimates provide this duo with devastating potential. Soldier:76 ultimate provides him with literal aimbot-type potential, and with Baptiste ultimate combined, the damage would be way more on those headshots.

The duo must use their ultimates together to kill all those running enemies.

These two champions are fantastic together, as Kiriko’s ability to deal substantial critical damage is complemented well whenever Roadhog gets a hook on the enemy tank.

Kiriko and Roadhog combination will have all the enemies running as no character of the game can deal with the massive damage of hook and critical damage combo.

Moreover, the best part of their duo is Kiriko’s ability to cleanse Roadhog of any anti-heals. This will allow Roadhog to regain health up to 350 and receive 50 percent reduced damage.

The synergy between both provides Roadhog with a speed boost from Kiriko Ultimate, allowing him to stay close to the enemies and deal massive damage to the squishy enemies.

Mercy and Zenyatta form a perfect support duo for your team. They increase the damage out for your team and provide extra damage to burst down the enemies quickly.

Enemies caught in Zenyatta’s Orb of Discord and allies boosted by Caduceus Staff will deal massive additional damage in the fights.

Moreover, Mercy’s ultimate Valkyrie is not defensive, so here the problem is overcome by Zenyatta’s Transcendence. The ultimate from Zenyatta will defend against solid enemy attacks and ensure your team stays alive to terminate the enemies.

How to play support in Overwatch 2

Support heroes are the backbone of your team composition, and they can get your team to take an offensive stance and fight aggressively without fearing for their own life.

They have incredible abilities to overcome the challenges faced by other category heroes. Supports will provide the boost that is required to clean-sweep the fights.

Their primary role is to stay behind their allies and ensure that they survive long enough in the fights to win the battles. They do this by proving the extra abilities that other heroes can use and take down their enemies.

Since we now understand the fundamental role of Support heroes in the game, let’s get on with some tips that will help you play this role perfectly.

The most crucial aspect of playing support is the position. Instead of just letting your teammates play all the game for you, you need to be vigilant about the location you need to be at.

The most useful position to take is to be behind your tank hero. This is called ‘Backline’. The tank will be providing you protection by taking all the damage itself.

You would be able to spectate the whole game and respond fast when your help is needed. You should be vigilant about your teammates’ health and healing them.

Moreover, you would need to find an exit strategy as well. By this, we mean, you can’t be just hiding behind a tank. You need to find a way out if in case, the tank doesn’t help you. Your exit could be a doorway or anything through which you can escape.

Even though support heroes have gotten a rework in OW2 with a passive, you still can’t afford to lose too much health unnecessarily while out in the open.

In the 5v5 format, the team has only one tank hero and two support heroes. One of them is the main healer. So the team coordination needs to be perfect to grab the match out of the opponent’s hands.

The purpose of the main healer is basically to protect the tank hero at any cost. That is because if you lose the tank, you have most likely lost the game already.

Do not panic when you are alone

Most of the support-playing players panic when they do not find their teammates on their side and enemies are chasing them.

What happens is that sometimes you would find yourself alone and your teammates would be scattered around. To get out of that situation and run to their teammates, most of the players die.

It is certainly not advisable to leave your position and run outside towards your mates as you would most likely be hunted down.

What you should do is let them chase you. If the fight outside is raging against your team and theirs, try to make some of their players chase you.

By doing this, their team will be divided and your teammates would most probably win the combat and save you.

There are times when support heroes are all alone and there is no way to survive other than fighting back. Despite having lesser attacks, you should not hesitate from using all of your strength.

You should think of strategies that can put as much damage as possible. For instance, the flying ability of Mercy in Ultimate form combined with Caduceus Blaster can put lots of damage.

Similarly, every support hero has something that can be harmful to enemies. You need to utilize that move smartly to make the most out of it.

Coordinate with your teammate

Most of the matches are won when there is healthy communication or coordination among teammates. The basic task that supports perform during matches is buffing their teammates and de-buffing the enemies.

With the right coordination, you would be able to provide your services when they are most needed.

Provide intel to your teammates

Since support heroes are not well suited to take up the fight, it is advised that they should continuously move around and keep an eye on the opponent’s strategy.

Sometimes the main fighting heroes are so immersed in taking enemies down, that they forget from where the attacks might come.

It is better that support keep them informed about every movement of the enemies and from where the attack is expected. This will magically enhance the overall performance of the team.

Use support heroes that can stay close

By this, we mean that there are certain heroes that are very agile in movements such as Mercy, Lucio and Kiriko. The advantage of using them is that they can get to any place in battle in no time.

If you are in trouble, your mobility-based abilities will allow you to either run away quickly or even move straight to a nearby ally in cover. Since these healers excel at mobility in OW2, they are also useful in going toward your allies to heal them at a crucial moment and potentially clutch the match.