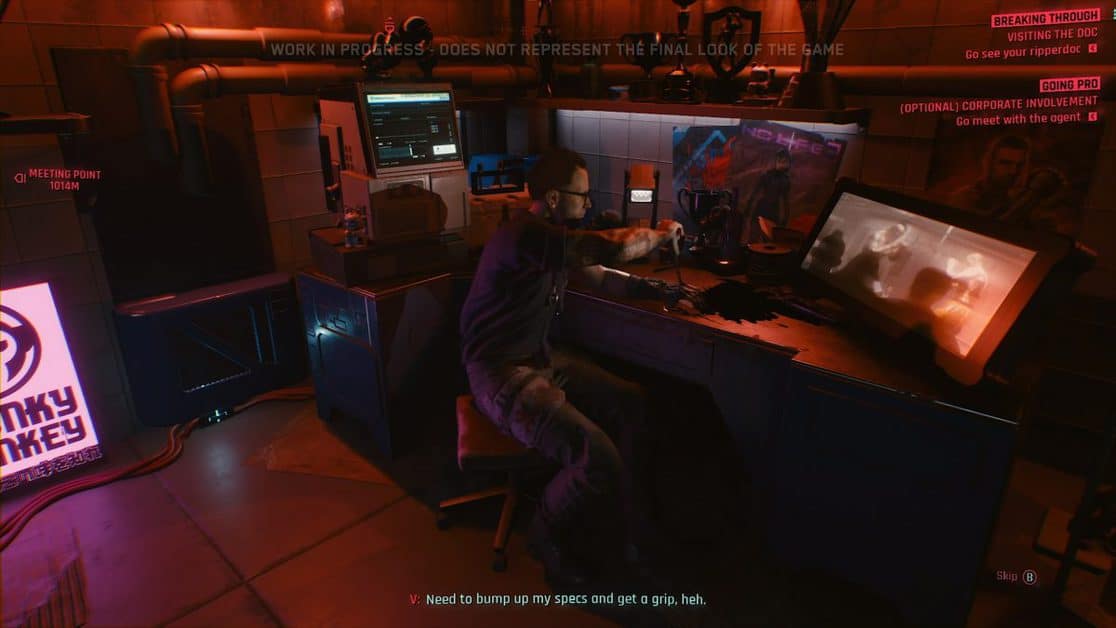 Follow this guide, to know about the details and locations of the Cyberpunk 2077 Easter Eggs and Secrets references of world-famous games, films, and TV series!

These easter eggs will help you in appreciating the thought and depth behind the extremely detailed Night City of Cyberpunk 2077.

During the River’s quest, you’ll have to sneak into a lab unit. Once there check one of the backrooms present there, you’ll notice that it will be similar to the BB unit from the gameplay ‘Death Stranding.’

Travel towards the Badlands, and from the border, go around 650m towards the east. When you reach the Regional Airport travel 750m towards the southwest, you’ll find a few dead bodies lying around a circular dish having “101” marked on it.

If you extract the convo between Gary Epps and Albert Cole, you’ll notice that they mentioned something about Bunker 101. It is the reference to the game “Fallout- Vault 101”

While roaming around the Night City, you’ll arrive at a point where a message will appear on your screen starting like “After 50 long years…” with a Title No life 3. This is a reference mocking the famous Half-Life 3.

During the Heist, which is the Act One Mission, you’ll notice that there is a character named Oshimo at the hotel bar. As a part of an additional objective, you’ll have to meet Oshimo while checking the bar and having a conversation with him. Oshimo is the gaming industry legend, Hideo Kojima.

The Biosynergy perk in Cyberpunk’s Quickhancking tree is the SHODAN in the System Shock game franchise.

There are many Easter eggs related to Geralt’s Horse Roach from The Witcher 3. Look at Cyberpunk’s Photo Mode, you will find many Roach stickers there plus some arcade machines which you’ll see that are playing as an 8-bit Roach.

A Fistful of Dollars

You’ll see an image of “A Fistful Of Eurodollars” perk on the Handguns tree, this is named after the classic western “A fistful of Dollars”.

You’ll notice the image of Revamp perks on the Engineering Tree. This image has the same art as the cover of the Original Soundtrack Album of AKIRA.

The image of the Massacre perk on the Annihilation tree has a resemblance with Bruce Campell from the iconic Army of Darkness.

Back To The Future

There is also another icon image of the Crazy Science perk on the crafting skill tree that resembles Christopher Lloyds from the film Back To the Future.

During the mission “Ghost Town” you pass through some tunnel located in the Badlands. After completing this mission, you can start a side job with 40 Street Cred after waiting for a couple of days.

This job is referred to as ”Murk Man Returns Again Once More Forever”, which is a Batman reference.

Head towards the Rooftop of the Hotel Advocet located in Vista Del Ray. Once there reach the rooftop and you’ll find a character who has an uncanny resemblance to Roy, from Blade Runner. He’d also be holding a white dove.

During the hostage mission in the Coronado, notice that NPC name Jet White, Spike Valentine, and Faye Spiegel from Cowboy Bepop.

In Cyberpunk, River Ward looks very similar to Tyler Durden from Fight Club (seems like I broke Rule No 1) during one scene.

Ghost In the Shell

In Cyberpunk, notice that the avatar on Judy’s phone is a ghost who’s present in a shell. There is also the same Tattoo on Judy’s left arm. There one another Easter egg from the same movie as The Yaiba Kusanagi CT-3X motorcycle is named after the protagonist of the movie franchise.

Easter egg from the iconic James Bond bond series is Referenced in Cyberpunk’s Photo Mode pose as “My Name is V. Just V”.

At one point in the game, Olive asks Sergei how he managed to piss off Tyger Claws, to which he replies “Ah! it was just a friendly misunderstanding. This man, look normal, with a beard, and brown shoes. nothing, you know, breathtaking. And he also has a little dog.

There is a reference to Joker by the Photo Mode Pose called “Joker Stairs”.

Travel through the road that goes southwest from the Biotechnica Flats. On this way, you’ll find a Kaukaz Bratsk U4020 crashed, around which there will be several corpses. Next to one corpse, you’ll find a disk named Archived Conversation. Which is a conversation between Charlize Fury and Dakota Smith.

Extract this conversation, and notice that Charlize mentions that during their mission Max was wounded and both Zero and Peter died. This is a reference to the iconic film Mad Max.

In the southwestern region of Badlands, you’ll find a cave that will be located near the vendor of melee weapons. Go inside this cave, and you’ll discover that there is a chest present surrounded by several corpses. Open this chest to find a data shard upon which is written by a Militech engineer named Thomas Star.

You’ll find the information on the shard that he’s kidnapped in Afghanistan, where some gangs want him to convert the missile technology. The same happens in the movie Iron Man to Tony Stark.

You’ll notice an image of the Head Start perks on the Breach Protocol tree which resembles Gendo Ikari from the film Neon Genesis Evangelion.

The icon image of the Hand in Bartmoss’ Legacy Perk on the Quickhacking tree is a reference to the TV series Star Trek.

During the side, Job Reported Crime notes the “ I Don’t Like Sand” references from Star Wars.

In Rancho Coronado, get down towards the sewers. Here you’ll discover a crashed bike and truck having some dead bodies in the surrounding. Here “One man and one… robot?” is a reference to the film Terminator 2: Judgment Day.

Yes! Cyberpunk 2077 offers an Easter egg from the world comedic series The Office. Which is referenced as a dialogue that you will hear while exploring the Afterlife. While you are in the Afterlife, you will meet Dennis and he will want to give you a job directly without a Fixer.

Accepting the job will lead to a side quest called ‘Big in Japan.’ You will be transporting a package during the quest that turns out to be a person called Haruyoshi.

Later in the quest, you will hear Haruyoshi telling a story about his being the best Brain Surgeon in Japan.

When Johnny takes over as a new character of V, for the first time he goes to the Afterlife club on the rampage. Here at one point, a mysterious man is wearing a black coat. He offers Johnny a red and a blue pill. It is one of the most famous references from The Matrix.