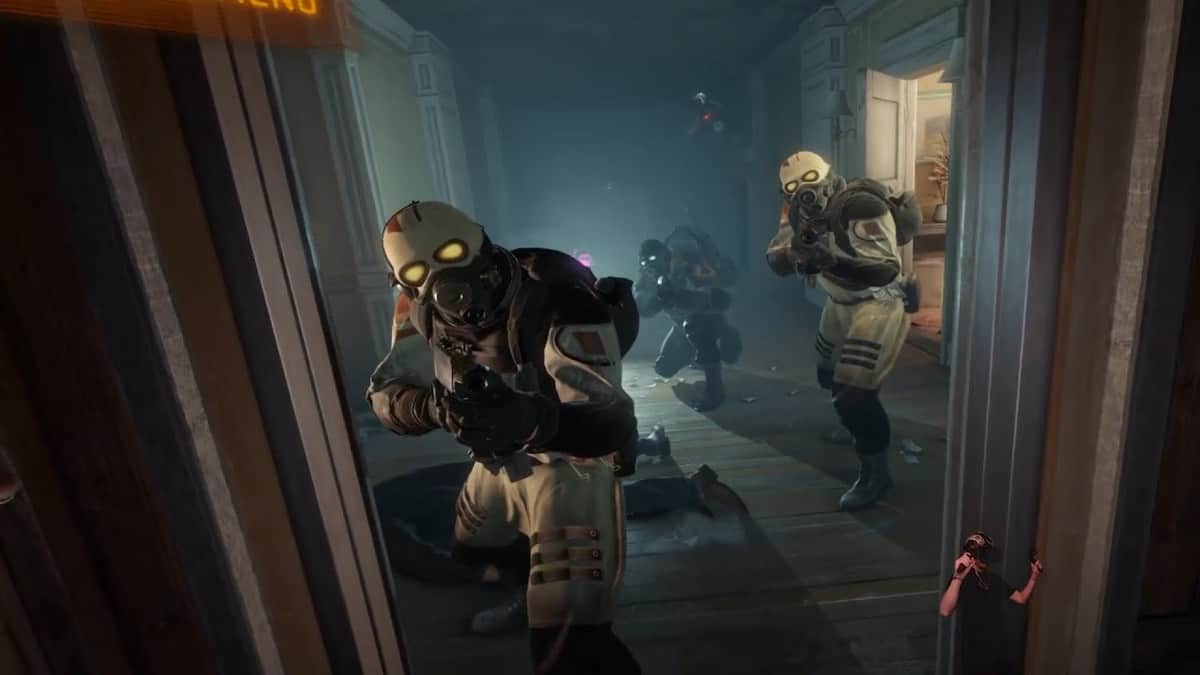 Welcome back to the dystopian world of Half-Life! You are in the boots of Alyx, playing through a virtually enhanced version of Half-Life, finally! The Half-Life: Alyx Chapter 1 Entanglement has you walk through City 17 and teaches you the ropes of the early game.

Talk it out with a few people, and get immersed! Here, we have made a walkthrough for the first chapter of Half-Life Alyx, making sure to put down every detail as we have seen it.

Get in Contact
Thrown into the apocalypse once again, you stand by a balcony with your equipment by your side. The world is even more immersive than you last remember. You peek over the balcony, you see the sky, and you see nothing but all hell loose on Earth.

Head back up the stairs into your workspace, and activate the microphone by simply pressing the white button, and you will see an automated message by your dad asking for reports regarding the city’s patrol routine. Alyx will be instructed to meet up with everyone back at the safehouse again.

Before heading out, in the very first room you can see a Snark kept in a jar. There is a food container next to the jar. Use the food container to feed the Snark to earn the Good Grub achievement.

Time to Head Out
Right next to the comms machine you will find a door with a red handle, slide it open and start heading down the stairs into the hallway; head past the open door into the lower balcony only to be greeted by a giant machine plugging in someone’s Wi-Fi; at least that’s what I assumed. Proceed further down to your left and head into the next door into your living quarters.

Head down the elevator just ahead of you and you will find yourself in an abandoned restaurant only to be called on by someone. Head right and go into the back of the restaurant and exit out into the alley.

Your friend will now talk to you and ask you regarding the status of the mission; to which you will simply assure her.

Now, turn around and start walking down the alleyway and head left (To your right, you can see a lot of militia backup arriving). After a bit, turn right and head into the open door.

Getting Back into Base
Go up the stairs and to your right you will see the balcony. Head up the ladder and start clambering along the rooftop until you reach a vent with a red handle. Open it and use the elevator to find yourself surrounded by militia. Unfortunate.

Abducted
In the truck, a drone will attack your container and cause an accident. Grab the headset you are given to talk to Russell, who will tell Alyx what happened. Crawl out from underneath of the truck once it’s opened and then proceed to head forward from underneath another opening created by the drone.

Proceed to ‘parkour’ yourself up from the boxes to your left to find yourself by a garage. Proceed through and get out from the other side.

Head up the ladder at the end by the metal gate onto the balcony, only to be confronted by a giant robot. Walk onto the pipes, and get into the apartment through the window. Open the locker, and press the red button to open the secret base.

Russell’s Plan
Russell will now detail you regarding the plan and the seriousness of the situation. Alyx’s dad may be in the risk of getting his brain sucked out and your entire operation is at risk of being compromised.

You can use the Geiger counter here to measure Russel and earn the Eye of the Geiger achievement.

Another achievement, Little Slugger can also be unlocked here in Half-Life: Alyx. In Russell’s room, there is a miniature baseball character located in front of a monitor to the right of the door to the gravity gloves.

You must put it as your representation in the minimap when Russell asks you for an object while making the plan.

The plan is to take a train and get to the objective before the other train and hack the controls for Russell to be able to take control.

Proceed out through the back and grab a pair of the gloves Russell mentioned. Continue through the left from the trapdoor and head outside the garage.

Alyx will be taught how to use the gravity gloves to bring certain objects closer to you without you having to move any closer to them. Simply aim at an object and flick your wrist to bring objects to your grip.

Russell will now proceed to give you a gun and some ammunition. If you catch the pistol magazine he throws at you while it is in mid-air, you will earn the Mag-Snagger achievement.

Head out the fence gate in the back and get into the train to start end the first chapter of Half-Life Alyx. Before getting on the train however, next to the fence there will be a gnome on a white couch. Pick it up for Gnome Vault of My Own achievement.