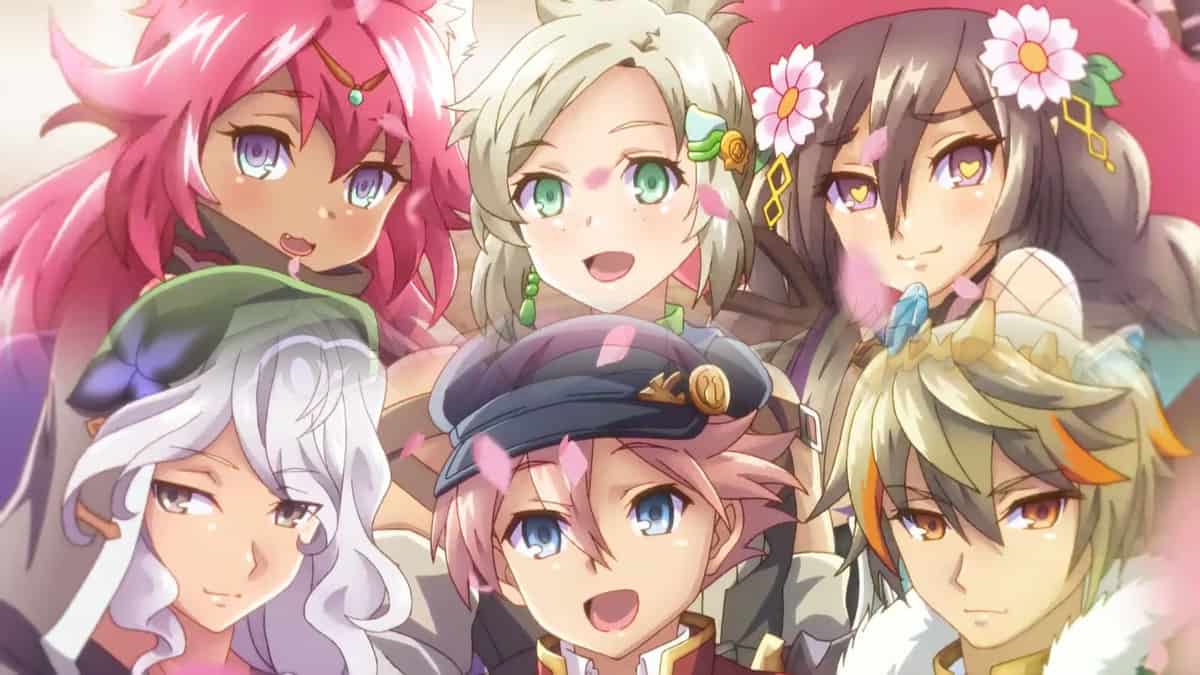 The much-awaited Rune Factory 5 features a whole new cast of characters, including 12 new marriage candidates for the player. We’ve prepared a list of all Rune Factory 5 Marriage Candidates in this guide. In addition, we’ll describe each Bachelor’s and Bachelorette’s personality so you can have an easier time finding your soulmate.

In Rune Factory 5, there are 6 bachelors and 6 bachelorettes, which add up to 12 marriage candidates for the player. Each candidate has their unique personality, idiosyncrasies, likes, and dislikes which you need to know before you pick the one you want to marry.

A great thing about Rune Factory 5 is that players can now finally pick their marriage partner from either gender. You can get married to any of the 12 marriage candidates listed below.

There are 6 bachelors in Rune Factory 5. Below, we’ve described the personality and quirks of each bachelor in the game.

Martin is a blacksmith in training and an apprentice of Darroch. Martin will come into your life very early in the game, making him one of the characters you’ll spend the most time with within Rune Factory 5.

Martin will teach you how the item forging system in the game works, and you’ll be paying him regular visits throughout your playthrough.

Martin is a quiet guy who loves Orichalcum and Scrap Metal. The latter is very easy to obtain, but the Orichalcum is a different story.

Cecil is the younger brother of Martin, the blacksmith. You’ll meet Cecil early on in the game, and you’ll get to know that he aspires to be a legendary detective so he can investigate his parents’ disappearance.

Cecil looks up to his older brother, so Cecil’s favorite food is the same as his brother’s – Fruit Sandwiches. If you can’t make him Fruit Sandwiches, you can just give him raw fruits; he won’t mind those either.

An important thing to remember is that there’s nothing Cecil hates in this world more than Milk products. So make sure never to give him something that has milk in it.

Murakumo is a loud-mouth were-animal who runs the Inn in Rigbarth. He’s the younger sibling of Misasagi. You’ll be visiting his Inn quite frequently as you can restore your HP and RP at this place.

In this way, you’ll get to interact with Murakumo many times. His favorite dishes are Grilled Skipjack and Dumplings. Both of these dishes are quite easy to make, so strengthening your relationship with Murakumo seems relatively easy.

The items Murakumo loves the most are Hero’s Proof and Power Gloves. Unfortunately, these items can only be obtained during the end-game content.

Ryker is a young carpenter under the apprenticeship of Palmo Creacie de Sainte-Coquille, the Rigbarth carpenter. Since Ryker offers very useful services, you’ll frequently visit him during your playthrough of Rune Factory 5.

Ryker has a very mild and sleepy personality. Yet, despite this, he’s a very serious person who cares about his friends and community.

The dishes he likes are Toast and Sweet Potatoes. Both of these dishes are super easy to cook, meaning you’ll be able to strengthen your relationship with Ryker easily.

But the dishes Ryker loves are Ice-Cream and Croquettes. Unfortunately, these dishes are quite difficult to make, so you’ll need to level up your cooking level before you can make them efficiently.

Lucas is one of the most mysterious marriage candidates in Rune Factory 5. Later in the story, he appears in the game but fits right in with the main plot.

At first glance, Lucas seems to be a very dapper and eloquent man, but his mysterious aspect is that he’s an amnesiac and doesn’t remember much of his backstory.

Lucas is fond of regular Udon and Cans, but the food he loves the most is Fried Udon.

Reinhard is a knight who serves as a bodyguard for Beatrice in Rigbarth. Despite being a strong, righteous knight, Reinhard has a very gentle and loving personality, and he deeply cares for and loves his friends.

What’s great about Reinhard is that he loves all kinds of dishes. His favorite ones are Toast, Sandwiches, Seeds, and most importantly, Failed Dishes and Object X.

When you fail a cooking recipe, a Failed Dish is created, and Object X is created when you fail a medicine recipe. For some reason, Reinhard is fond of both of these items, which is extremely convenient as it makes these two items useful for you.

There are 6 Bachelorettes in Rune Factory 5. Below, we’ve described the personality and quirks of each bachelorette in the game.

You can think of Priscilla as the main female romanceable character in Rune Factory 5. This gentle and supportive girl comes into your life early on in the game and is a big part of the main story.

Even though she seems quite shy and unassertive at first, she is determined to become a brave woman.

She works for Livia at the Rigbarth Outpost. Befriending her is an easy task since she likes Hot Milk and Hot Chocolate, and both are very easy dishes to make.

But her favorite dishes are Chocolate Cake and Chocolate Cookies, which are quite difficult to make, especially early on in the game.

Fuuka is a were-animal who has an extremely upbeat personality in Rune Factory 5. She has a very fun gimmick to her – she doesn’t speak human language. Instead, she speaks in a strange language, but her sentences’ meaning is shown in parenthesis.

She works at the town restaurant and is very fond of fish. Her favorite dishes are Golden Octopus and Golden Salmon, two very rare kinds of fish.

Worry not, as you can also give her regular fish to please her. Her favorite item is the Emerald, which you’ll be able to find later on in the game.

Beatrice is a princess who has come to Rigbarth from foreign lands. As such, she is unaccustomed to the local life. Nevertheless, she travels around Rigbarth accompanied by Reinhard.

Despite that, she is a very kind and endearing person. She likes Bread, Apples, Strawberries, Milk, and Strawberry Jam.

Beatrice doesn’t like to share information about her mission in Rigbarth, which makes it hard to get to know her, meaning it’ll take longer, so start a romance story with her compared to the other bachelorettes.

Scarlett is a half-elf who works for SEED. Later in the story, she appears in the game but sticks around till the end.

She is a bold and assertive person. She’s the only marriage candidate who doesn’t trust the player straight off the bat. She lives in a room on the first floor of the Rigbarth Outpost.

One of her favorite dishes is Onigiri, but Tempura dishes are the ones she loves.

Lucy is a childhood friend of Priscilla, who also works at the Rigbarth Outpost. You’ll meet her early on in the game.

She has a very competitive personality but is playful. Her favorite activity is fishing, so accordingly, you can give her all kinds of fish to woo her.

She also likes milk and fruits, but rare fish like Tuna and Glitter Snapper are her favorite food.

Ludmila loves flowers and flower seeds, which is interesting as she sells both of these items. This means that you can talk to her, buy gifts for her and gift them to her while standing at the same place. This makes it very easy to start a romance story with Ludmila.

In Rune Factory 5, starting a romance story with a marriage candidate has three steps. The first is to befriend the person by giving them things they like, which will lead you into step two, where you’ll start dating said person, and then finally step three, which is marriage.

For the first step, you’ll have to befriend the marriage candidate and get your friendship level with them to level 7 before you can begin dating them.

To get the friendship level up, you can do many different things. First and foremost, you need to talk to the person every day. You don’t even have to indulge in a long conversation by selecting the “Chat More” option; a quick chat will do.

After that, the most important thing you need to do is give them gifts. Find out the things they like and regularly give them to your crush.

You can also complete their Task Board Requests to level up your friendship quickly. Finally, when you reach friendship level 3, make sure to invite them to festivals and parties so you can spend time with them.

Once you’ve reached level 7 and have seen all three Romance Story sub-events of the marriage candidate, you can start dating them.

First, confess your love to them by selecting the “By the way” prompt. If they don’t accept your love, you’ll need to level up your friendship further and try again.

While you’re dating them, take them out on three dates to become eligible for marriage.

To marry your boyfriend/girlfriend, you’ll have to fulfill the following pre-requisites.

Once you have fulfilled all of these pre-requisites, you’ll be able to propose to your significant other. If they accept, the wedding will take place the following day.