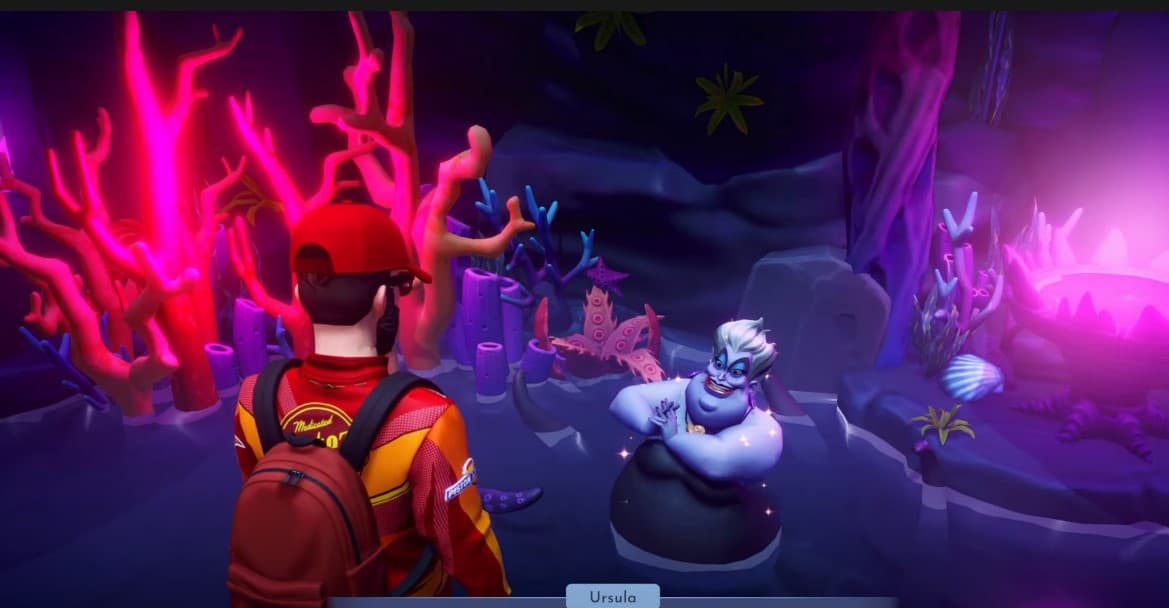 We as kids never thought that we would one day be helping all the villains that we once hated. But if you think about it, what movie would it be where a hero didn’t have to struggle? So putting that into perspective, this guide will tell you everything you need to know about Ursula in Disney Dreamlight Valley and how you can complete each one of her quests.

Disney made sure to create a villain that everyone remembers so they put together the character of Ursula – The Sea Witch and gave her enough limelight for everyone to remember her.

Things are a little different in Dreamlight Valley because in order to restore the true essence of the valley you will need both the good guys and the bad guys and freeing Ursula is part of that mission.

How to unlock Ursula

You will find Ursula stuck in a cave near Dazzle Beach and upon approaching, she will give you a Crystal Key that will unlock another part of the cave, and there you will find three puzzles at three different levels.

Solving each puzzle will unlock a gate and after solving all three of the puzzles, you will find a power orb behind the third door. You will have to use the Orb of Power to free Ursula.

The first puzzle will require three different gems to solve. You will need a Peridot, Aquamarine, and a Garnet. You can mine these gems throughout the map with a pickaxe.

Once you have all three gems, you can return to the cave where you will find three statues. Place the Peridot on the green statue, Aquamarine on the blue, and Garnet on the red statue. With that, the first puzzle will be solved.

For the second puzzle, you will see clues in front of three statues and you have to understand the clues and plant the right crop in front of the right statue. The first statue says “Underground” which means Carrot.

If don’t know what you are going to cook, you can cook Veggie Pasta, the recipe of which can be found in a chest, nearby.

Once you have cooked and consumed the meal, the third gate will also open. Behind that gate will be the Orb of Power. Collect the orb using a Fishing Rod.

Once you have the orb, go to the start of the cave and place the orb in the pillar and that will free Ursula.

Once you have freed Ursula and she goes back to the valley, you will be able to do quests for her, and the following are all of Ursula’s Quests in Disney Dreamlight Valley.

Once you have freed Ursula and she has moved back to the valley, she will request you to build a house for her in the water.

For that, you will have to go to the shore and build a house here and there. It will cost you 10,00 Star Coins to do that.

Once that is done and you again go talk to Ursula. She will ask you to craft a Magical Scroll and Ink Kit to complete the Lair Sweet Lair quest.

To craft the mentioned items, you will need the following items.

Once you have collected all of the materials and crafted the Magical Scroll and Ink Kit, take them to Ursula who will reward you with a fish of a rare kind.

For the Magical Moment quest, Ursula will ask you to help her gain more power, which can be done by bringing her a special flower. To get the special flower, you will have to talk to Mother Gothel.

She won’t give you the information for free, instead, she will ask you to bring the following items in return for information about the flower.

Cook the above-mentioned meals and take them to Mother Gothel and she will give you a rare flower that is near the pillar in the Glade of Trust. Take it back to Ursula to complete the quest.

The quest will require you to first collect a conch shell for Ursula which you easily can just by talking to Moana. After that, you will need to craft The Enchantment Potion for Ursula using the following items

Once you have all the items, just go to your crafting station. At the station, craft the Enchantment Potion and give it to Ursula.

She will give you an Enchanted Flower that you will plant outside the Mythical Cave on Dazzle Beach. Once you are done with that, visit Ursula again to conclude the quest