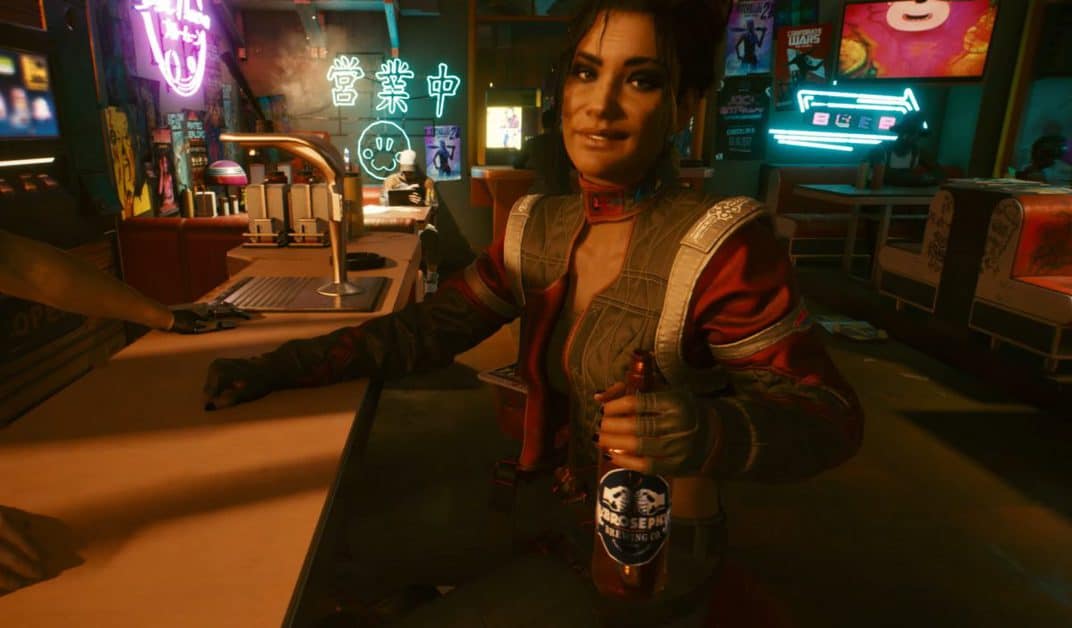 In Cyberpunk 2077, involving in a romantic relationship in Night City is possible depending on the people you meet and the way you connect with them. One such character is Panam Palmer. In Cyberpunk 2077, Panam is introduced as an ex-member of the Aldecaldos family.

V seems to have a crush on her. Therefore, we will discuss where to meet and how to romance Panam in this portion of our romance guide. The romantic arc has a significant bearing on the game’s ending. Follow the guide to not miss out on any opportunity that could lead to getting physical with her.

How to meet Panam Palmer in Cyberpunk 2077

The first time V will meet Panam is during the Ghost Town Main mission. The first important dialogue choice that you’ll have to face here will be after getting her car back. Ask her about the location of the hideout.

Later at the bar, drink to her ride before asking her to get a single room for both of you. Confirm to her that you meant what you said, and she’ll agree.

Is that it? Well, not really. She’s just agreed to save money, so don’t get your hopes up for now.

Panam is a heterosexual character, However, there’s one requirement you need to fulfill to be able to romance Panam. This is because you’ll have to choose the Male V character having a male body and you can choose any voice.

How to romance Panam Palmer in Cyberpunk 2077

To have a romance with Panam there are 3 main missions and 3 side quests you need to complete. You are required to complete Main Jobs such as Ghost Time, Lighting Breaks, and Life During Wartime and Side Jobs such as Riders on the Storm, With a Little Help From my Friends, and Queen of the Highway.

During your first encounter with Panam during the Ghost Town quest, V will assist her to attack  Nash’s group. During one part you both have to stay at the Sunset Motel for a night.

At this part ask her if you both could share a room. She will acknowledge that it makes sense given that each room has two twin beds. Tell her that it is not what I had in my mind as your response.

In this quest, Panam and V will work together to interrogate Anders Hellaman and later find him out.  Use the following dialogues:
– Stay in the car. You’re hurt, won’t be too much help out there anyway.
– I gotta get Hellman, will you help?
– I’ll help you settle the score with Kang Tao.
– It wasn’t Panam’s fault.

After Lightning Breaks ends, you’ll have to wait for the call from Panam Palmer. This will take about 12 in-game hours. After which a side quest “Riders on the storm” will initiate.

Riders on the storm

During this mission, if you ever ask her if you could sleep with her, she will immediately reject. Don’t worry just follow the steps, and try to meet her during 24 in-game hours, or else the story won’t progress further.

After the last quest ends you’ll have to wait for another call from Panam Palmer. This will also take12 in-game hours.

After which another side quest “With a little help from my friends” will initiate.“ Notice that during this quest she will reveal her interest in you, but the process will be slow. Just try to agree with her. And at the campfire move closer to her.

Queen of the Highway

In the next side quest “Queen of the Highway” you will both be very close. Remember to choose “Let Panam Touch You” and you both will have an intimate scene.

After the mission, when she walks you out, kiss her and thank her for being there for you. With that being said, the Panam questline would be over.

There will be a few messages from her now and then, and you can reply to her as your liking. After these quests, you’ll ally with Aldecaldos as well as earn the Life of the Road trophy.