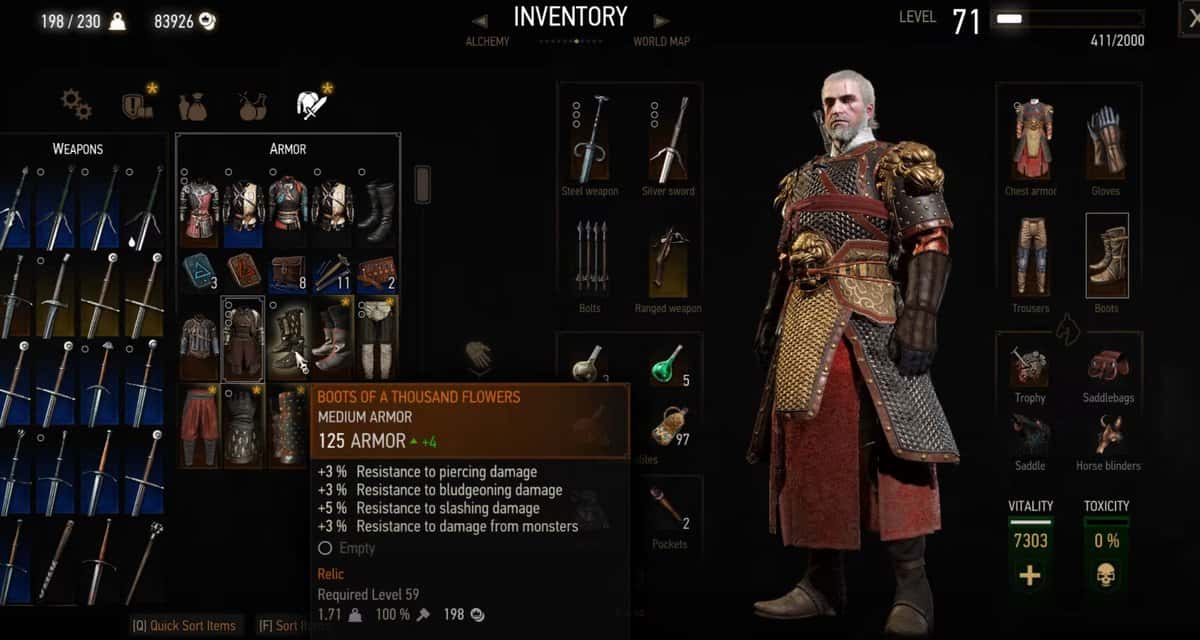 If you are unsure of which armor sets you should be using as you progress through this massive RPG, allow us to give a rundown of all the best armors you can find to improve Geralt’s durability in combat in The Witcher Wild Hunt.

The Feline Armor Set is an excellent loadout for Geralt in TW3. This armor has a risk reward system, so it is best for expert players who know complete details about The Witcher 3.

The Feline armor set offers sizable boosts to Geralt’s damage output and the critical strike odds. This armor has some of the best defensive features in the game, even though its stats are not that good. It overcomes its weaknesses by increasing the chances of inflicting bleeding when used with the set’s corresponding steel and silver swords.

The Manticore Gear Set is a very strong sword throughout the game. It is only available in the “Blood and Wine” expansion. It features a set of medium armor and blades that you can only find in the Grandmaster variants.

You’ll first have to reach Level 40 of this armor gear set to use this armor. The Manticore Armor is all about alchemy, boosting your maximum toxicity and granting a bonus to alchemy charges and critical hit effects to your bombs if you equip the entire set. The swords are valuable, with each one boasting a +250 bonus to your Armor piercing, a strong critical hit damage boost, and a chance to bleed.

The Dol Blathanna armor set is added to TW3 Wild Hunt as part of the next-gen update. Being a medium armor set, it offers decent protection against a variety of damage types.

The complete Dol Blathanna armor set can be acquired from the treasure chest inside Yennefer’s room in Vizima so you will need to have made some progress in the game to reach that part of the main story.

Similar to the other Witcher school armors, the Viper armor set is yet another great gear set for Geralt to use. Unfortunately, it is a quite high level armor set and requires you to be at least level 39. On top of that, you also need to own the Hearts of Stone expansion.

The entire Viper armor set can be bought as crafting diagrams from Borsodi’s Auction House during Hearts of Stone campaign.

The Bear Armor Gear set is a strong Witcher armor sword. It is one of the Scavenger Hunt quests in the game. Bear Armor Gear set includes chest armor, crossbow, boots, steel and silver swords, gauntlets, and trousers. All of these items are upgradeable except the crossbow.

The Wolven Armor set consists of 4 pieces of armor and two swords. We have a Scavenger Hunt for this Gear set as well. The set includes steel and silver swords, boots, gauntlets, trousers, and chest armor. All these items are upgradeable.

The armor style is very similar to the style of Eskel’s. Each instance of Bleeding applied to enemies increases sword damage by 1% for each piece of the set, and each Adrenaline Point increases the possible number of Bleeding effects that can be applied to a single enemy.

Griffin Armor is a medium armor set of Witcher gear. You will find it in one of the Scavenger Hunt quests of The Witcher 3. The set includes chest armor, boots, trousers, steel and silver swords, and gauntlets. All of these items are upgradeable.

After using Stamina to cast a Sign in its standard mode, the next Sign cast within 3 seconds is cast in a standard mode without using Stamina. This will help in increasing the Yrden trap size by 40%. Not just that, even the stamina regeneration within the Yrden trap will increase by 5 per second and sign intensity by 100%. At the same time, the damage is reduced by 20%.

The Nilfgaardian is a free DLC armor set that allows players of the Witcher 3 game to step into the shoes of the Black Ones. By wearing this armor set, you’ll receive a respectable boost to all forms of damage resistance.

This set lacks any offensive boosts; however, this armor set is more useful for players who have trouble dodging attacks from opponent enemies.

It is a leather armor that Geralt has worn from the start of TW3. It will protect you from almost all types of damage in The Witcher 3 and can be upgraded so it’s basically a jack of all trades type of armor set.

At the bottom of our list is the Temerian armor set which players can get for free as part of one of the free DLC packs of The Witcher 3. The Temerian armor is nothing special in terms of stats but if you want to represent Temerian colors then why not use this.