The Witcher 3 The Battle Of Kaer Morhen Walkthrough 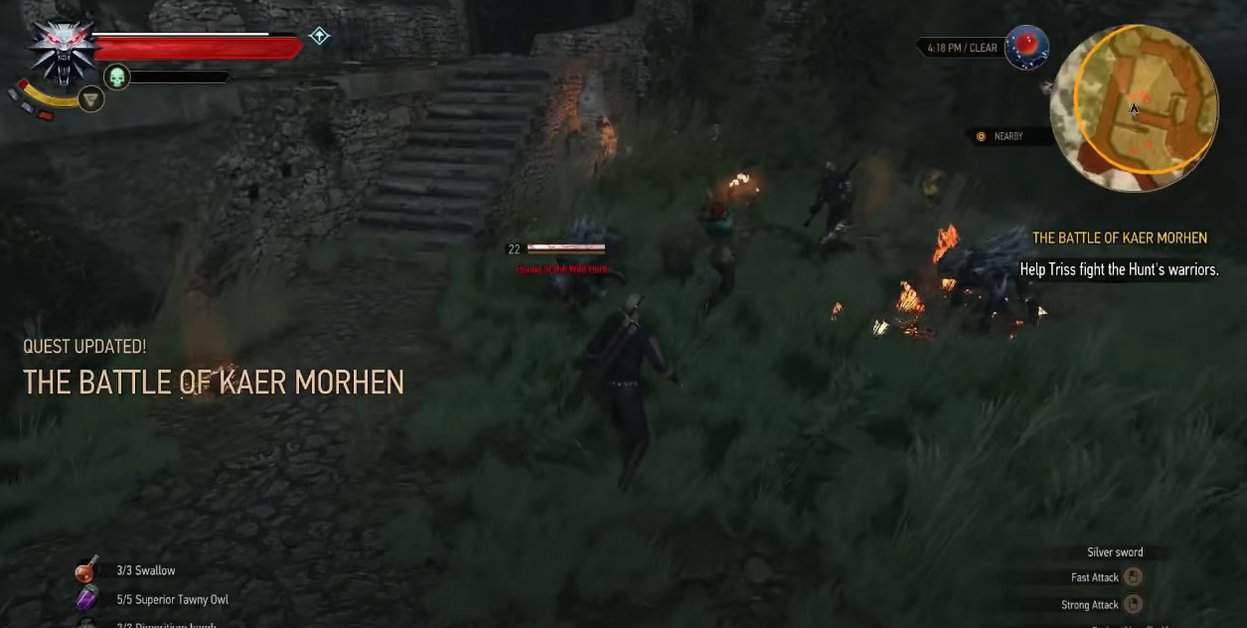 The Battle of Kaer Morhen is a main quest in The Witcher 3 which starts with the short reunion of Geralt with the Ciri. It all happens after “The Isle of Mists” quest when Ciri teleports to Geralt, and together, they start the preparation for the fight against the Wild Hunt.

This comprehensive guide will give you all the details you need to know to complete The Battle of Kaer Morhen quest in The Witcher 3.

Recruiting for the Battle of Kaer Morhen

Before starting the Battle of Kaer Morhen quest, an optional task player can make sure that they have the maximum number of allies with them beforehand. This includes both characters requiring players to complete entire questlines and characters that will join Geralt in the great quest that lies ahead.

The characters that will join Geralt for Battle of Kaer Morhen no matter what include:

Characters that require Geralt to complete certain requirements include:

The Witcher 3 Battle of Kaer Morhen

This quest starts in a lighter mood when Ciri teleports herself to Geralt, initiating a joyous reunion between her and her mentors in The Witcher 3. However, the lack of time shortens their reunion, as they have to get to work. After the reunion, Geralt must follow Triss and Yennefer to the main hall to discuss the events and form a plan to deal with the situation.

Once inside, Geralt will be provided with two different decisions regarding the preparations for the battle. This includes choosing Vesemir’s potions or Eskel’s traps. Both choices are equally good, but they will aid you in the battle in different ways in TW3.

If players decide to choose Vesemir’s potions, it includes superior swallow and thunderbolt. However, if you choose Eskel’s traps, they will be laid down in the courtyard, and the explosion will only damage your opponents.

The second-choice players will get with either digging out the armory or patching up the breach. Same as the last choice, these choices are equally beneficial but help out Geralt in different ways.

If you choose to clear out the armory, it will provide all the witchers silver swords, whereas if you patch up the wall, it will decrease the waves of the Wild Hunt that will appear later on in during the quest.

The battle will start once Lambert returns after completing the assigned task since all you have to do is leave the main hall and go outside.

Start of the battle

During this part of the battle, Geralt will be outside the Keep in the woods alongside Lambert and Letho. Here, you must close three portals through which the wild hunt will teleport. Destroying these portals will be fairly easy, but only if players make the right decisions in The Witcher 3.

To close the portals, players must either cast Yrden on them or use the dimeritium bombs from Lambert to destroy them. Additionally, there will be a few enemies from the wild hunt, as well as some hounds guarding the portals.

Once you’ve closed all the portals, a cutscene will be triggered, and players will realize that Triss hasn’t rained fire at the signal yet, indicating something is wrong.

In this phase, you will fight as Ciri who will rush out of the Keep to fight her battles on her own. While playing as Ciri, players will have the option of using a magic amulet that they can use to direct Triss’s fireballs. However, this is a double-edged sword and it can also hurt Ciri.

Players can also use her charge attack, which can deal a high amount of damage to the enemies while also stunning them. Eventually, players will reach Triss, and once they’ve eliminated all the enemies around her, Ciri can return to the rest of her companions.

Get back to Kaer Morhen

Now, the focus will shift back to Geralt, racing back to Kaer Morhen on his horse while fire rains down onto the ground. Avoid these fireballs since they will hurt Geralt; however, don’t worry too much about them and focus on returning to the Keep.

Once you’ve reached the Keep, you’ll notice Vesemir in a fairly tough situation, requiring you to help him close a portal. Geralt must close a gate here, for which he has to run toward the wall and flip the switch. Here, you can kill the enemies you encounter; however, it is pointless, considering they keep spawning.

Once you join everyone back in the Kaer Morhen courtyard, you’ll come across five warriors attacking Lambert and must save him. However, if you have recruited Keira, she will quickly rush in to save Lambert in your place.

Players have to retreat and make better decisions during this game section. Since, Yennefer’s spell will start to wane, causing the white frost to spread further. There will be several other things that players must do in this section of the game.

When Geralt crosses the first gate of the Keep, he must clear out all the enemies and move on toward the second gate. However, it is observed that Eskel seems to have fallen into trouble.

As Geralt, before you can help Eskel, players must help Triss first. This objective is similar to the last time you helped out Triss. All Geralt is required to do is clear out enough room for her to perform spells.

As for Eskel, Ciri will rush in to help him, considering he is trying to fight against Caranthir. After successfully pushing him back, Ciri and Eskel will be required to kill the rest of the enemies, after which they’re required to open the gate for Geralt and his companions.

Now that the enemies have been dealt with, Geralt will be required to close up the last couple of portals. Either through Dimerithium bombs or the Yrden sign.

However, this mighty battle does not yet bear the fruits of victory, as the white frost invades the Keep, forcing Geralt and his companions to retreat deeper. However, almost everyone is almost frozen, including Geralt.

Now, Eredin will appear, attempting to convince Ciri to give up. Watching this, Vesemir attempts to help by stabbing Imlerith with a dagger to make one last effort to fight back. However, it costs him his life. This prompts Ciri to let out a powerful cry that annihilates the wild hunt.

No matter what choices you made in the game beforehand, Vesemir is bound to die. You technically win the Battle of Kaer Morhen as there is no way to lose this scripted event. However, everyone doesn’t feel like celebrating because the generals of the Wild Hunt are still out there and will attack again to get Ciri.

Geralt and Ciri have a heart to heart after Vesemir’s funeral and Blood on the Battlefield quest starts. Keep in mind that if you or Keira didn’t save Lambert earlier, he will also die. The funeral will be for both Lambert and Vesemir in that case.