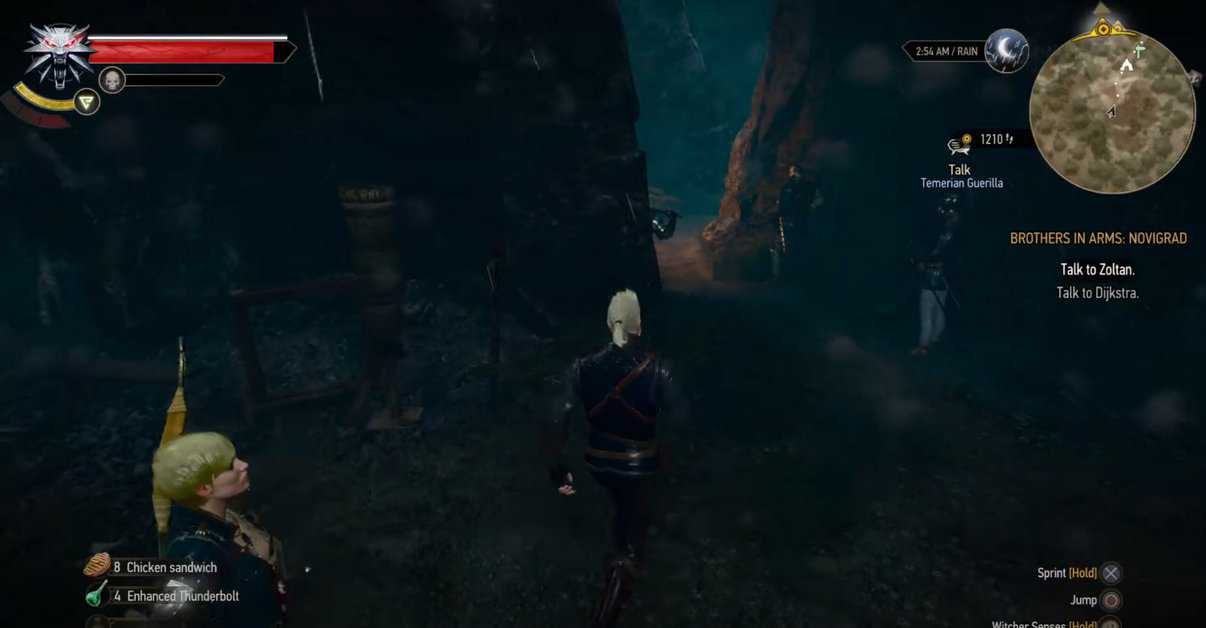 Geralt might be a powerful Witcher, but the Wild Hunt is too much for Geralt to hold off on his own in The Witcher 3. You need allies to help you fight against Wild Hunt, and to get them; you go through the Brothers in Arms quest chain in The Witcher 3: Wild Hunt.

Brothers in Arms is a collection of 4 different quests in TW3, where Geralt goes around the world of The Witcher 3 and recruits his old friends to create an alliance to challenge the Wild Hunt.

Geralt’s old allies are spread across the land, from the Northern realms to Skellige. Fortunately, all these missions are marked on the map, and you can easily spot them.

Let us look at the four Brothers in Arms quests in The Witcher 3 one by one. Remember that all of the Brothers in Arm quests will appear after completing the “The Isle of Mists” quest. You can tackle these quests in whatever order you wish but if you are progressing through the story, some Brother in Arms quests like the one in Velen will be completed before others.

Your meeting with the emperor is not a fruitful one. Emhyr has some unreasonable demands, and Geralt disagrees with them. Geralt will walk away from this meeting without anything, and you have to give no gift to Emhyr.

Since the outcome of the meeting stays the same, Emhyr and Geralt don’t reach an agreement, and your dialogue choices do not matter. Any dialogue option you choose will lead to a disagreement, so pick whatever you want.

You do not get rewards for the Brother in Arms: Nilfgaard quest.

Four of Geralt’s old friends are in Novigrad region of TW3. You meet Zoltan Chivay, Triss Merigold, Vernon Roche and Dijkstra in Novigard. Two of them will immediately agree to come and help Geralt on his quest to take down the Wild Hunt.

Zoltan and Triss will immediately agree to come and help Geralt on the quest. Zoltan will also provide his services as a Blacksmith later in the game, and his shop can be found in Kaer Morhen.

For Triss, you might have already recruited her if you followed her questline and completed “Now or Never.” If you have already met Triss and started a romance with her, she will already be in your alliance. Even if you haven’t followed on the quest, you can still talk with Triss and recruit her.

Roche is a bit harder to recruit. You need to help Roche in his task beforehand to get him as an ally. To recruit Roche, complete the “An Eye for an Eye” side quest. You also need to ensure that Ves survives in this quest to get Roche to help you in your fight. If Ves falls, Roche goes the other way. If Ves survives, you get both Ves and Roche as your allies against the Wild Hunt.

Lastly, you meet with Dijkstra. Dijkstra will straight-out reject your proposal. You cannot recruit Dijkstra to your cause in Witcher 3: Wild Hunt. You can have one more interaction with Dijkstra.

If you have completed the quest “Count Reuven’s Treasure,” you can provide the information about the treasure to Dijkstra. For this, Dijkstra will give you 1000 crowns and some other items. Just an additional way to get some extra rewards.

Besides the optional 1000 crowns, you can get the following rewards for completing Brothers in Arm: Novigraad in The Witcher 3.

As the name indicates, Brothers in Arms: Skellige takes place on the Skellige isles of TW3 Wild Hunt. Again, like Novigrad, Geralt meets with four potential allies in Skellige Islands.

The first person you talk to is Ermion. Ermion, also known as Mousesack, is an old friend of Geralt and will immediately agree to fight by your side against the Wild Hunt in The Witcher 3.

Next, you meet with Crach. Being the Jarl of Skellige, Crach cannot find in his schedule to come and help you against the Wild Hunt. He won’t offer more than words of encouragement to you.

If you help both of the Jarl’s children in their guests, Crach provides more than just words. He will offer Geralt a new steel sword, the Winter’s Blade. To get the blade, you need to talk to Crach after you have spoken with both Hjalmar and Cerys.

Next, you can speak to Jarl’s children, Hjalmar and Cerys.

Hjalmar is out of Skellige on a hunt, so you must find him in the quest “The Lord of Undvik.” After you find him, Hjalmar will be more than happy to accompany you on your quest to take down Wild Hunt once and for all. You can look around for more of Hjalmar’s companions in this quest so they can join you in the fight against Wild Hunt.

Lastly, we meet Cerys. Cerys won’t agree to come with you. If you want more allies, you can complete her quest “Possession.” Although this won’t change Cerys’ mind, she will agree to send some of her finest warriors to aid Geralt in the upcoming battle. Better than nothing.

For completing Brother in Arms: Skellige in TW3 Wild Hunt, you get:

The last Brother in Arms quest is in Velen area of TW3. The quest is the lengthiest of all, given that you only have one ally out of it. In Velen, you can only recruit the sorceress Keira Metz.

As you meet the sorceress, she hands you a list of four quests you need to complete before you can get her to join you against the Wild Hunt in Witcher 3. The list reads:

We listed them so you can see the order of the four quests you must complete before recruiting Keira Metz. These quests must be completed in the order listed, so get going.

Once all four quests for the sorceress are complete, you finally get to recruit her as an ally for the upcoming battle against the Wild Hunt.

The rewards for this quest are not predetermined and depend on the rewards you get for the four quests you need to complete to recruit Keira Metz in The Witcher 3.