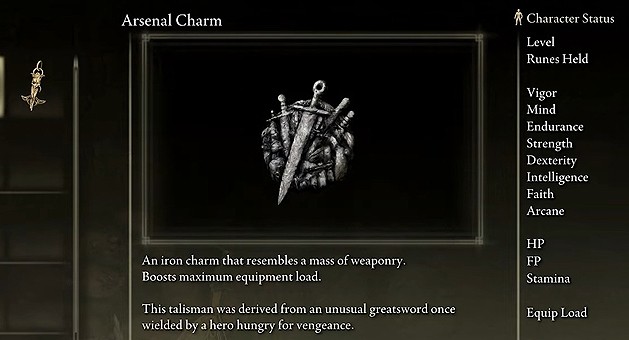 Arsenal Charm is one of the many talismans you can find to boost your stats in Elden Ring. Equipping this talisman will increase your equip load stat which determines your mobility based on your total weight.

Having a high equip load stat allows you to be more nimble on your feet to help you dodge, roll, and evade enemy attacks, or just move around better in general. If your equip load stat is low, equipping heavy armor, talismans, and armaments will make you a dead weight. You do not want that in Elden Ring.

The following guide will tell you how to get both Arsenal Charm and its +1 version in Elden Ring.

You can get the Arsenal Charm from Nepheli Loux at the Roundtable Hold.

You can unlock Roundtable Hold as a fast-travel-only location in the southwestern part of the map by defeating Margit, the Fell Omen, and then speaking with Melina at any Site of Grace. However, that is only one part of getting the talisman.

Nepheli Loux will only give you the Arsenal Charm as a reward for defeating Godrick, the Grafted. You will first find her near the golden fog door in Stormveil Castle that leads to Godrick, near the Secluded Cell Site of Grace. Once you have defeated Godrick, she will move to the library at Roundtable Hold.

Speak with Nepheli over there after completing her tasks to get the Arsenal Charm talisman. This will increase your equip load by 15 percent.

The Arsenal Charm +1 is the next version you can find for the talisman to increase your equip load stat by 17 percent in total.

Once you have the basic version from Nepheli Loux, head to Altus Tunnel south of the Minor Erdtree. Make your way into the second cavern before heading south.

You will eventually come across a wooden balcony. The Arsenal Charm +1 is in the pit below. You need to drop below from the left side of the balcony onto an overgrown root.

Next, keep following the root to a second balcony above. There will be a corpse here that you can loot for the Arsenal Charm +1 talisman.