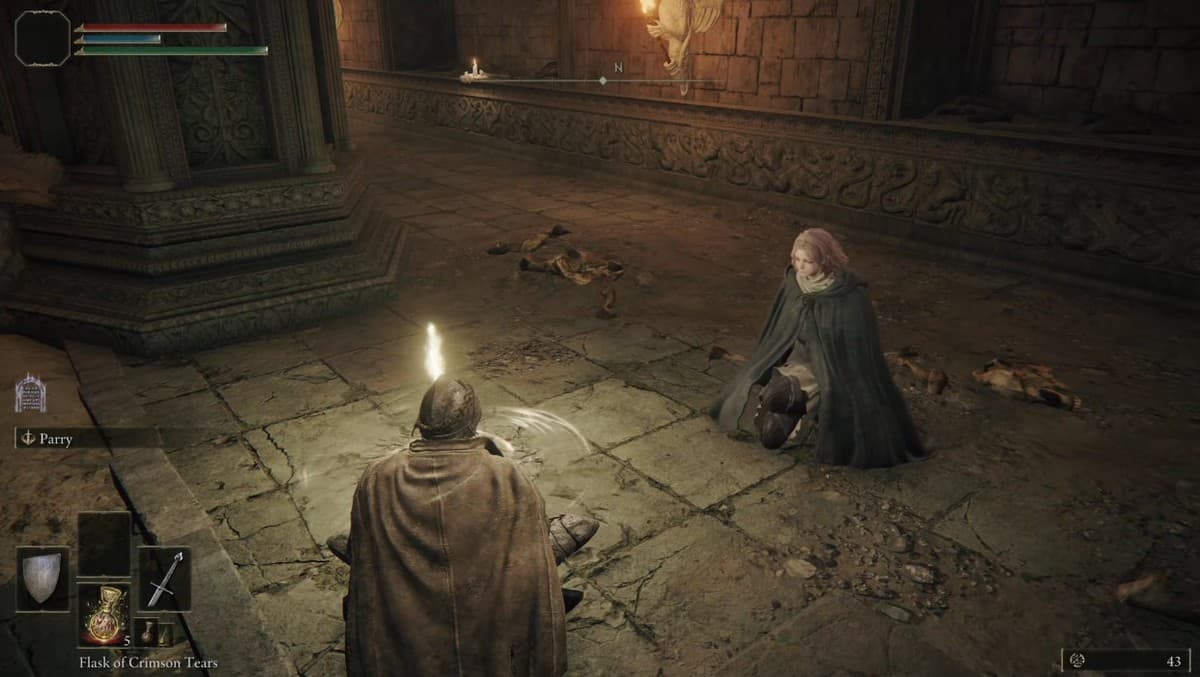 How to Unlock the Roundtable Hold in Elden Ring

The Roundtable Hold is a location in Elden Ring that isn’t available on the map and can only be accessed through fast travel. This location acts as a hub and is separated from other locations in Elden Ring, where you’ll find most of the vendors, blacksmiths, and more to interact with.

To access this location, you must first accept Melina’s accord. Melina is a mysterious NPC who appears whenever you rest at any of the Site of Grace’s. This may seem easy but is quite tricky to do.

First, you must rest at the Site of Grace. Then, simply head outside Limgrave until you hear whispers. This indicates that Melina has been awakened.

Once she does appear, she’ll test whether you’re worthy enough or not. If you are, she’ll help you travel to the Roundtable Hold.

As you accept her accord, she’ll want you to visit the Stormveil Castle. Once at the location, you’ll be led by the Guidance Grace to fight a boss called Margit.

Margit, the Fell Omen is one of the toughest bosses you’ll come across in the area, and fighting him is not optional as you must defeat him to continue any further into the Stormveil Castle.

Defeat the boss and then proceed to rest at any Site of Grace to trigger an appearance from Melina, who then takes you to the Roundtable Hold. Do note that you must activate more than four Sites of Grace to summon Melina.

You can talk to different NPCs at the Roundtable. These include quest givers like D Hunter of the Dead, Sir Gideon Ofnir, a blacksmith, a spirit enhancer named Roderika you can unlock by completing her quest, and many other vendors as well.

You can also talk to Enia, and gain remembrances of Gods. There are some other secrets and interesting characters at the Roundtable for you to discover.

A woman named Fia can also be interacted with in her chambers to gain ‘some comfort.‘ Keep visiting the Roundtable from time to time as things might change and different rooms might open up for you due to some quest completion or story progression.

Apart from all the NPCs mentioned above, here’s a list of all others you’ll be encountering once you enter Roundtable Hold.

How to Leave Roundtable Hold

Once you’re finished exploring the location, have upgraded your weapons, interacted with vendors, and grabbed useful supplies. Then, it’s time to exit the RoundTable Hold. Unfortunately, this is where a majority of the players get confused and just wander around the location, trying to find an exit.

Well, it’s really simple to leave the Roundtable Hold. You’ll exit the location the same way you entered it, by fast traveling.

How to Unlock Locked Doors at Roundtable Hold

Once players have made their way to the Roundtable Hold, one thing that can hold them back from proceeding is the locked doors. These are confusing to open and can make you wait for hours if you don’t know the right method.

In addition, there are so many NPCs to discover in the area alongside other bounties locked behind these doors.

Well, worry no more! After playing and figuring it out, we’ve concluded that players will have to deal with 4 locked doors in the hold. The first door requires players to have one Stonesword Key to open.

Once that door is unlocked, they’ll find a chest in the room with the Crepus’s Black-Key Crossbow.

The second locked door will be located behind the first one, and to open that, you’ll be needing two Stonesword Keys. Behind this door, you will find Assassin’s Prayerbook. So in total, you’ll have to get three of these keys.

For the third locked door that’s located in the sewer beneath Leyndell, Royal Capital, you’ll first have to make way to the room next to the Twin Maiden Husks. Here you’ll deliver the first Seedbed Curse to Dung Eater, and he will then hand you over the Sewer-Gaol Key. Upon acquiring that key you will unlock the door.

Lastly, players will have to defeat demigods like Godrick the Grafted to unlock the door to the Two Fingers. The rest of the doors can be opened by gestures and by completing other tasks in the areas.

Although Roundtable Hold is considered to be the safest location in the game, there are still some dangers lurking around. A couple of invasions will happen while players are present in the location, and they will need to gear up for these fights.

Mad Tongue Alberich is an invader with a red glow around him. If you’re a player with a low level, you certainly have a threat as he can kill you instantly and clear you out in these levels. Therefore, we recommend you to be in between levels 20 to 30 when you’re about to test the waters with this boss.

He has a lot of attacks up his sleeves, including frost and poison attacks. And before players go in for the boss fight, we highly recommend that they equip a weapon with a poison affinity Ash of War.

If Alberich releases a frost attack, players will be caught up inside a block of ice for a few seconds, leaving them in a vulnerable state.

The second type of frost attack is relatively easy to dodge as these are ice projectiles that the boss throws toward players a couple of times. These are predictable and easy to guess where they land, so you can efficiently run around the arena without getting hurt.

As the fight gets intense, Alberich will release an AoE magic poison ring toward the players when they are close to him. You can pretty much tell when the attack is going to be released as it takes time for execution; however, you still need to run away and be smart when it comes to dodging or rolling around in the arena.

The best way to deal with this boss is to perform best at rolling and running around when any attack is being produced, as these will be your initial defense strategies. Next, use jump attacks as Alberich has a hard time navigating these and will deal massive damage when you perform these.

You can also use spells against him, and continuously produce them against him, especially after he charges his frost and poison attacks. He also gives you a few second windows while he recharges for his next move, so use that time for backstabbing with your weapons and generously attack with your best moves.

Players will be invaded by Ensha once they acquire the Haligtree Secret Medallion and return to the Roundtable Hold. To acquire the Medallion piece, the players will have to make their way to the Village of the Albinaurics in Liurnia and follow where the path leads.

As you go down the path, you’ll find a glowing pot on the side that you will have to hit to reveal Albus. Upon interacting with him, he will give you the Medallion piece. Now return with that to Roundtable Hold, and you’ll face Ensha invasion.

Unlike the Mad Tongue Alberich, this fight is more straightforward. With a couple of strikes and dodges, players can easily take down Ensha. Once they are defeated, players will receive a Royal Remains armor set.