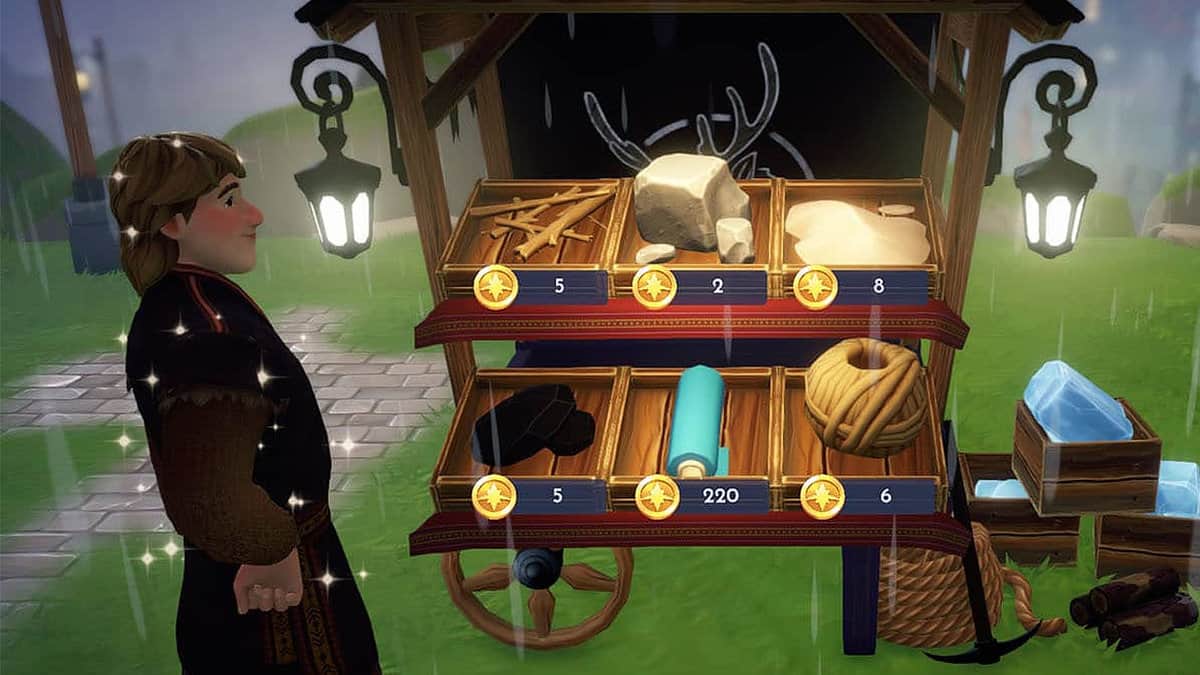 You will spend half of your time foraging for various materials and resources in Disney Dreamlight Valley. These crafting or cooking items are scattered across all of the different biomes in the game.

However, sometimes, it is far better to purchase them directly with Star Coins instead of spending time looking for them. That is where Kristoff’s Stall comes in.

While you will also have access to Goofy’s Stall to purchase seeds and produce, Kristoff’s Stall is the only source from where you can get items like wood, stone, fabric, etc.

How to unlock Kristoff’s Stall

Kristoff initially shows up in the game once you have unlocked the Forest of Valor biome. At first, he will only have a few tasks available, such as the one where you have to unlock Donald Duck. After unlocking Donald Duck and completing his quest, a few more will gradually unlock.

One of these tasks is the “Village Project: A Mountain Man’s Stall” which can only be started after Kristoff reaches friendship level 6. Upon starting this quest, Kristoff will inform you that he needs to open up a stall in the valley but isn’t quite sure how to go about it.

For that reason, you first need to have a little talk with Goofy (who runs his own stall) and ask for his advice. Goofy will give you some of his items from his old stall, after which you have to begin the search for a few more items. These items are pretty troublesome to find though and will require a lot of time to collect.

It would perhaps be best if you collect these items generally while going through the game, and once you collect all of them you come back to Kristoff. The items you need to collect are as follows:

Once you’ve gotten your hands on all the required items, head over to a crafting station, craft Kristoff’s stall, and place it anywhere you want to complete the quest.

Upon completion of this quest, Kristoff’s stall will be available for use but will only be at half its potential. This means that it will only be able to sell Softwood, Stone, and Sand.

To unlock the other row for the items, you have to upgrade the stall.

How to upgrade Kristoff’s Stall

To upgrade Kristoff’s Stall, you have to complete yet another quest offered by him. This is the “A Broken Sled” Quest in which he asks you to repair his broken sled.

Once you get your hands on all of these items, you can move on to repairing Kristoff’s Sled via the Crafting Station. After giving Kristoff his new sled, Kristoff will ask you for some samples for his stall. These items include:

Handing him these items will unlock the other row for him to use in his stall. He will use these slots to sell Coal, Brick, Snow, Glass, Fabric, and Fiber alternating from time to time.