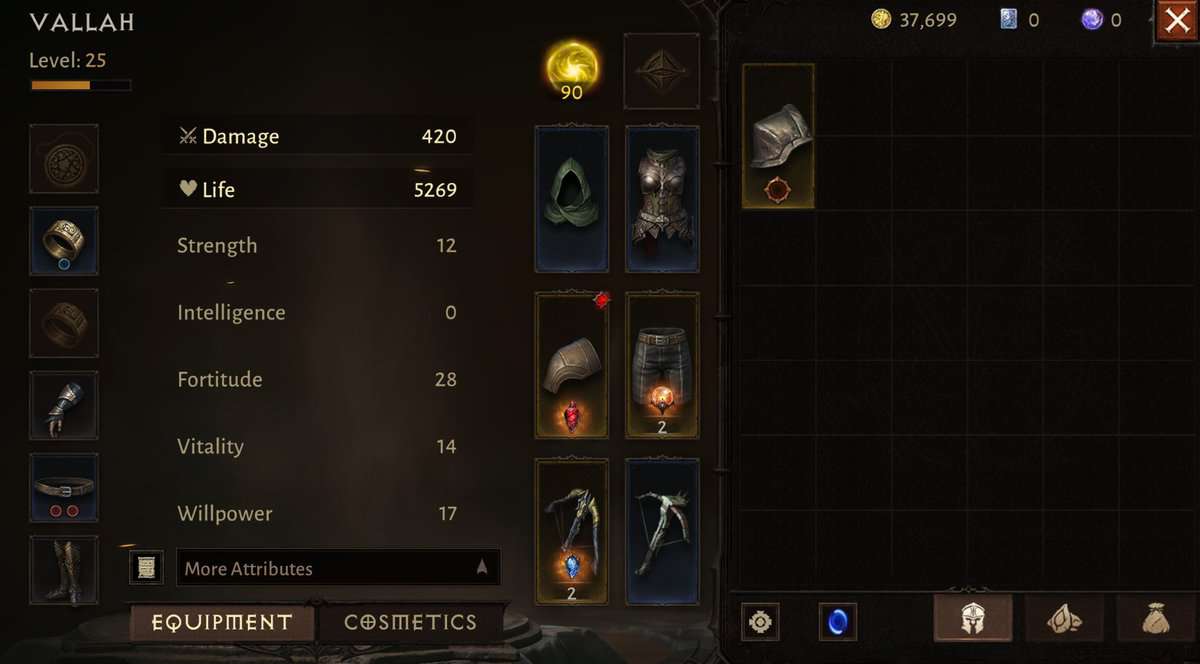 To help you understand how the attributes system works in Diablo Immortal, we’ve prepared this guide where we’ll walk you through all the information you need to know about each attribute in the game, including the best stats to raise for each class in Diablo Immortal.

Each class comes with unique strengths and weaknesses, which we go over in detail in our Diablo Immortal Class Tier List, so it is important to balance weaknesses and strengths by raising different stats to make sure they pack a punch in combat.

In Diablo Immortal, your character has a multitude of different attributes. These attributes are grouped into three categories based on importance: Primary, Secondary and Additional Attributes.

There are many different ways of raising attributes in Diablo Immortal. And every time you raise an attribute by 1 point, you gain 1 Combat Rating. But to take full advantage of the attribute system, you need to understand what each attribute does and how important it is to the different classes in the game.

To help you with that, this guide will cover the functions of each attribute and the best attributes for each class in Diablo Immortal.

The Strength attribute increases the Combat Rating of Barbarians, Crusaders, Monks and Demon Hunters by 1 per point and also raises their damage by 0.33, per point.

Necromancers and Wizards receive little to no benefit from the Strength attribute.

The Intelligence attribute increases the Combat Rating of Necromancers and Wizards by 1 per point and also raises their damage by 0.33 per point.

Barbarians, Crusaders, Monks and Demon Hunters receive little to no benefit from the Intelligence attribute.

The Fortitude attribute increases the Combat Rating of all classes by 1 per point and their Armor and Armor Penetration (Secondary Attributes) by 0.1 per point.

The Vitality attribute increases the Combat Rating of all classes by 1 per point and their Life stat by 3 per point.

The Willpower attribute increases the Combat Rating of all classes by 1 per point and their Potency and Resistance (Secondary Attributes) by 0.1 per point.

The Secondary Attributes in Diablo Immortal completely depend on your Primary Attributes and grant some additional strengths to your character.

The Combat Rating attribute is undoubtedly the most important in the game. It is a combination of your Offense Rating and Defense Rating Secondary Attributes.

The Armor attribute decreases the damage taken by your character and raises your Block Chance, which scales directly with your character level and can go up to 60% against mobs and 20% against players. Armor is raised by Fortitude and Paragon abilities.

The Potency attribute governs the duration of the debuffs you inflict by comparing itself with the opponent’s Resistance stat.

If your Potency is very high compared to the enemy’s Resistance, the duration of your debuffs can be increased by up to +99% for mobs and +50% for players. Willpower and Paragon’s abilities raise potency.

The Resistance Attribute governs the duration of debuffs inflicted on you by comparing itself with the opponent’s Potency stat. Willpower and Paragon’s abilities raise resistance.

The Additional Attributes in Diablo Immortal allow you to fine-tune your character build to perform exactly how you want it to.

These attributes are the Magic properties that further strengthen your equipment and grant more buffs.

The Accuracy Rating attribute governs your chances of landing a hit on an enemy by comparing itself with the enemy’s Evasion Rating. It rolls on Helms, Shoulders and Main-Hands.

The Attack Speed attribute governs the speed of your skills and Primary Attacks. This attribute affects both melee and magic attacks.

The Cooldown Reduction attribute governs the duration of your skill cooldowns, allowing them to recharge quicker.

The Movement Speed attribute governs the speed of your character’s movement.

The Block Chance attribute governs the chance of you blocking all damage from an opponent’s attack. Do note that you cannot block Critical Hits.

The Cheat Death attribute allows you to avoid death when you get killed by an enemy and instead get reduced to 1 Life.

Do note that this attribute does not grant immunity upon being triggered, so if you have a damage-over-time debuff applied on you at the time of your death, you will likely die anyway.

The Life Regeneration attribute allows you to regenerate a small percentage of your maximum Life every 5 seconds, but only while you’re not in combat. After leaving combat, you must wait 3 seconds for Life Regeneration to activate.

The Damage Increase attribute allows the player to deal more damage during the Cycle of Strife. It is a Faction feature, and the increase in damage you get is based upon your rank in the Faction and what Faction you’re in.

Adventurer Faction grants a 0% increase, Shadows grants up to 32% at Whisperer IV, and The Immortals grants up to X% at Crown Rank X.

The Defense Increases stat allows you to take less damage from players during the Cycle of Strife. It is a Faction feature, and the decrease in damage you get is based upon your rank in the Faction and what Faction you’re in.

Adventurer Faction grants a 0% increase, Shadows grants up to 32% at Whisperer IV, and The Immortals grants up to X% at Crown Rank X.

The Magic Find attribute governs the chance of monsters to drop higher-quality drops. Do note that it does not affect the quality of Set Items in Dungeons.

Now that you’re up to speed with what each attribute does in Diablo Immortal, the next step in understanding the attribute system is to learn which stats are best suited for which classes.

But before diving into that, let’s go over the universally useful stats. These stats will provide you with significant benefits no matter what your character’s class is.

Fortitude, Vitality and Willpower are the Primary Attributes that you need to raise no matter what the class of your character is. These attributes will raise your Armor and Armor Penetration, Life, Potency, and Resistance, respectively.

All attributes are needed irrespective of your character’s class, so invest some points into Fortitude, Vitality, and Willpower.

Now, let’s talk about the stats best suited for specific classes. Strength is for classes that use melee attacks instead of magic spells. This means that if you have a spell caster build, Strength is completely useless for you.

If your character is a Barbarian, Monk, Demon Hunter, or Crusader, you will benefit heavily from Strength.

The Intelligence attribute is the way to go if your character is a Wizard or a Necromancer.

With all this information in mind, below, we have listed the three most important stats for each class in Diablo Immortal.