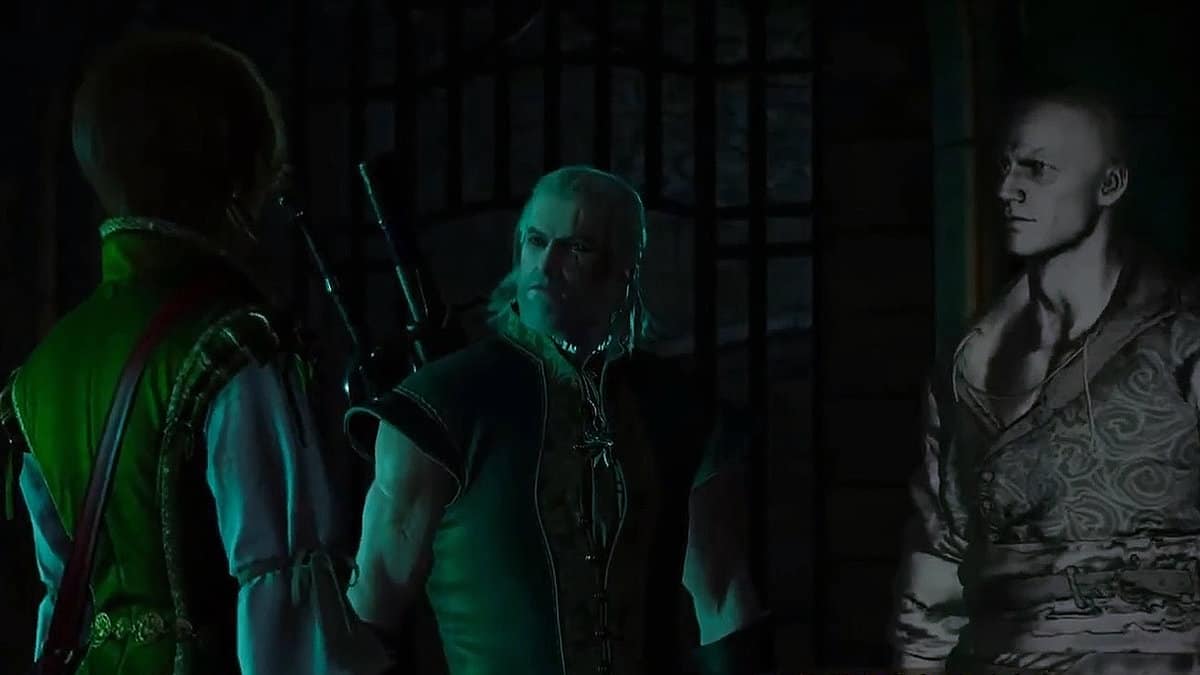 “A Dead Man’s Party” is a part of the main questline added to the Witcher 3 in the Hearts of Stone expansion. This particular quest becomes available after completing the “Evil’s Soft First Touches” and starts in Novigrad. Although there won’t be much fighting during this quest, we still recommend that you hit the level 33 mark before starting it.

The main mission of this quest is to give Vlodimir von Everec the “time of his life”. The only problem is that the man is dead. We’ll have to bring him back to life, hence technically letting him have the time of his “afterlife”.

This guide contains the complete walkthrough to the “A Dead Man’s Party” walkthrough, including side activities, trophies, and achievements associated with it.

You need to meet Shani, an old friend, at her clinic which is located in Oxenfurt southeast of Novigrad. The clinic is directly below the Oxenfurt Harbor signpost.

Inside the clinic, you’ll meet with a couple of Redanian guards, and after Shani leaves, they will tease Geralt about his possible feelings for Shani.

It doesn’t matter what you say though, as after a short while they will leave, and you can then ask Shani for help. Shani has some knowledge of the renowned Redanian noble families and insists on accompanying you to the Von Everec Crypt. The quest will have started at this point.

The Von Everec Estate is located to the northeast of Oxenfurt Harbor and will be marked on your map. The fastest way to get to this location is to fast travel to the Draken Hollow outpost and make your way east from there to the marked destination. Once there, you will find Shani and you both will enter the creepy mansion.

Not long after, you will reach the family crypt. At this point, Shani refuses to go into the crypt and decides to stay above ground. Geralt has to go alone into the crypt now, but before he does that, Shani gives him a Censer – which will be useful later on.

Geralt then heads down into the crypt alone. Not far down the crypt, you will encounter some Wraiths, two at a time and four in total. To end things quickly, coat your blade in Specter Oil and start slashing through. Yrden makes the Wraiths vulnerable and more susceptible to attacks, so ensure you are using that as well.

After the Wraiths are defeated, you will be free to explore the crypt. You now have to find Vlodimir’s coffin. You can use your Witcher Sense for that, but to make things easier, know that it is in the North East of the crypt, specifically the one with the saber placed on it.

Once you find Vlodimir’s coffin, equip the Censer that Shani gave you and use it. Then walk around the various areas of the crypt and spread the incense in areas marked on your map. Once that’s done, head over to the central votive and use the Igni sign to light the place up.

Lighting the central votive brings some of the von Everec individuals back from the dead. They will be hostile, and you will have to “kill them again”. There will also be some Wraiths here that need to be taken care of. Once all the fighting is done, Vlodimir’s ghost will appear, and you’ll have a chat.

At one point, you will have to select the “Guess I could bring you, someone, to possess” dialogue. Seeing that Vlodimir has the green signal now, he possesses Geralt, who loses consciousness after that.

Not long after, a cutscene will show Geralt waking up in Shani’s care. He then flirts with Shani to some extent. Geralt gains some control a few moments later and explains the whole situation to Shani.

Since we were tasked with letting Vlodimir have the “time of his life”, Shani offers to take him to a wedding she was invited to.

After that, you will have the option to explore the crypt further. There will be a breakable wall north of the main crypt that you can demolish using the Aard sign. Inside, there is a graverobber’s corpse which has a crypt key on it. This key can be used to open a locked door next to the main entrance of the crypt.

This will lead you to a tunnel that contains some loot along with some cobwebs and arachnomorphs. Looting the place is optional, but it will annoy Vlodimir. Do note that this will not affect the main questline. You can return to do this later if you wish, but won’t be able to listen to Vlodimir’s dialogues.

Once you’re done looting and wandering around, you can head over to the wedding that Shani invited you to, which is at Brunwich.

Arriving at the wedding, Vlodimir will comment on Geralt’s obscene looks. He insists Geralt put on some clothes more appropriate for such functions and will “borrow” some clothes from a clothesline nearby. You will also be forced to get a shave and a haircut.

Once Geralt is properly dressed and groomed, it’s time to attend the wedding. Shani will first introduce you (both) to the newlyweds. Although Shani wishes well, the dialogue options you have to choose from are hilarious. As you will have noticed, Vlodimir has an odd sense of humor which can result in unexpected results. He can insult the groom at this point, but it won’t have much of an effect to the overall quest.

There are a couple of activities you can partake in during the wedding, 4 of which will be mandatory. Each mandatory activity completely will pass a bit of time in the game, which eventually reaches midnight. The purpose of doing these activities to pass some time is to make Vlodimir leave Geralt’s body.

After two of the mandatory activities are completed, Vlodimir will take Shani out for a dance. O’Dimm comes over shortly as the two dance, and devotes the next song to the pair. He leaves after a short while.

If all of the available activities are completed, you will earn the “Let the Good Times Roll!” achievement. A simple way to do this is to leave the mandatory tasks for last, specifically the task concerning Shani’s shoe, and do the rest first.

You can partake in the following activities:

If you head over to the center of the area, you will see two men discussing the disappearance of the Fire Swallower. They tell you that he was chased away by a dog. You are tasked to find the Fire Swallower and bring him back to the wedding. The simplest way to do this is to use your Witcher senses and follow the dog’s tracks from its house.

The dog tracks will lead into the forest, and you will discover it barking at the fire eater stuck in a tree not far along. You can pat the dog to calm it down and bring the Fire Eater back to the wedding.

On your way back, you will be attacked by a wild boar. It shouldn’t be that hard to kill, just use your Axii sign to slow it down and slaughter it. After that, you can escort the Fire Eater safely back to the wedding.

The next activity you can participate in is playing Gwent or even winning it against the Dwarves. There will be a couple of them sitting at the table. You can approach them and ask for a game.

Note that the deal is that the loser of the game has to wear the ears of an ass, so make sure to learn how to play Gwent if you don’t want to do that.

Dancing in the Barn

The next step is dancing in the barn with Shani as we discussed before. Here, Vlodimir will flirt with Shani and attempt to kiss her – an attempt that fails miserably. But it is rather hilarious to watch.

Gaunter appears not long after and dedicates a song to the pair, or rather, the trio. You will converse briefly, after which Gaunter leaves.

King of the Swineherds

You can start this activity by talking to the farmer outside of the pig pens. You will be tasked to herd the pigs into the pen and claim the “King of the Swineherds” title.

You can force the pigs into the pen by approaching them from the back or from the sides. If you use any signs during this, people will say that you cheated, and your rewards wouldn’t be that generous.

If you manage to herd all the pigs into the pen without using any signs, you will receive the King of the Swineherd’s crown, which grants a 15% bonus in gold earned when equipped as a trophy. Shani will also receive a stuffed pig toy that you can see sitting at her place later on.

Brawl with the Brothers

After the aforementioned activity is over, the next one involves Vlodimir wooing a maiden nearby. Vlodimir does muster up a few well-thought dialogues but still ends up getting challenged into a brawl by the woman’s brothers.

Vlodimir accepts the challenge to fight the three brothers. He doesn’t mean to fight fair though because he takes hold of a fencepost piece to fight with. The fight isn’t that difficult, as you mainly have to parry and counter to finish them off.

Geralt and Vlodimir have a bit of chat among themselves after the fight, and he persuades Vlodimir to explain himself to Shani.

This will be the last activity that you can take, after which the clock strikes midnight. You will be tasked with finding a lady’s slipper as you approach the small pond.

All you have to do is dive into the pond and use your Witcher Senses to locate the slippers, which will be glowing red. Grab the slippers and swim up top to complete the activity.

Once all the activities are done, Shani and Geralt/Vlodimir make their way to the Capping Ceremony and the clock strikes midnight. However, first, you have to make a compelling speech and enjoy some of Vlodimir’s last moments with you.

At the end of the ceremony, Vlodimir writes a letter to his brother, Olgierd von Everec, stating that he’s had the time of his life. A few moments later, Gaunter O’Dimm appears and banishes Vlodimir in a way that can’t be good for the latter.

Once everything is done, Geralt receives advice from Gaunter on how to make things up for Shani, hence concluding this quest and starting the “A Midnight Clear” side quest, giving you a chance to romance Shani in the Witcher3.