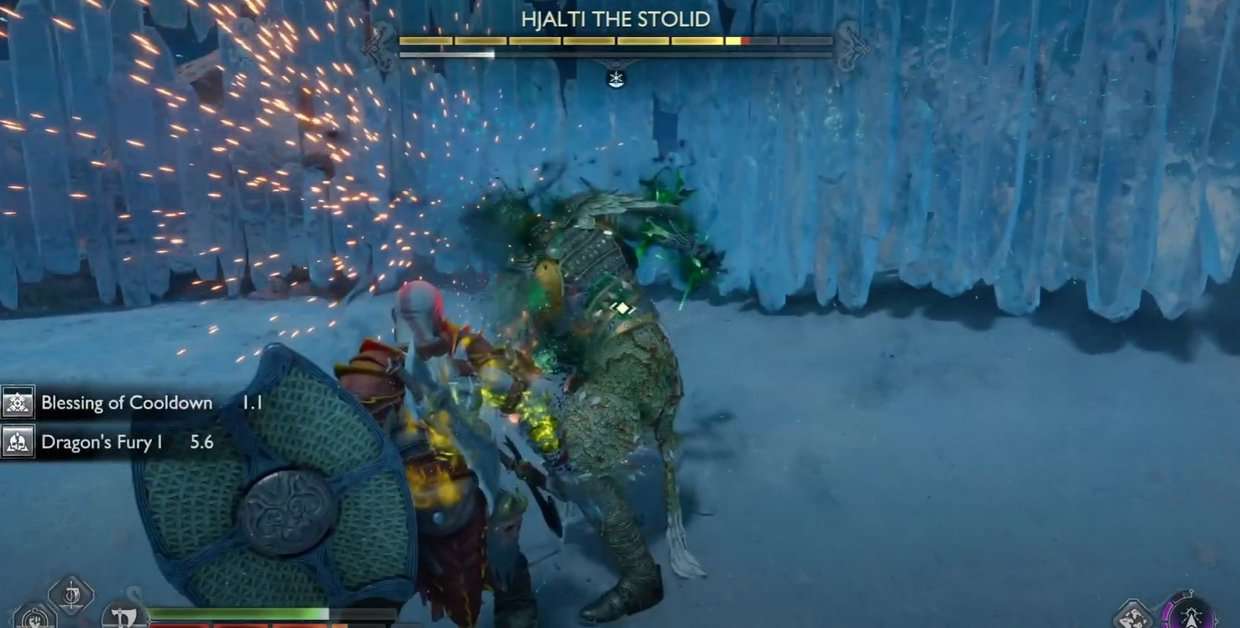 If you are struggling to complete the Fit for a King favor in GoW Ragnarok and find all these berserker gravestones, allow us to tell you about their locations and tips to defeat the particular bosses.

So we recommend you go to the Berserker Gravestone locations after completing the Story.

The following are all the Berserker Gravestone locations in God of War Ragnarok.

Midgard – The Lake of Nine

This Gravestone is on the north side of Tyr’s Temple, right next to the Shores of Nine. You will face Fraekni, the Zealous boss here.

This boss is difficult to beat, but as you get familiar with her attacks, things can get much easier. Unfortunately, you cannot block her ranged attacks, so dodging is the right option.

She also uses a block break attack in which she jumps in the air. You should dodge both attacks and make a counterattack to lower the boss’s health.

You will get an open window to attack right after she attacks you. You must use this small window and continue repeating it until she dies.

You will get the following rewards for defeating Fraekni the Zealous:

Bosses: Bodvar the Fierce and Starolfr the Troublesome

In the Applecore, after reaching the Mystic Gateway, head forward in the northwest direction. This will take you straight to the Gravestone. You will see the light after moving a little forward, and you can follow that to reach the location.

The duo; Bodvar and Starolfr, you face here are good partners, as one has two swords and the other has two shields. As a result, you will see a lot of attacks from both of them, and some are not even blockable.

The only strategy you can follow to take out these bosses is to handle them one at a time. They are not as strong individually, so it is easy to take them out this way.

You will get the following rewards for defeating Bodvar the Fierce and Starolfr the Troublesome:

You will find this gravestone clock in the western part of the Nidavellir to the docks. It is the same place where you encounter Durlin at the start.

This boss is less intense than the previous ones you faced. However, simply avoiding and dodging his attacks and making counterattacks will work for you.

Hardrefill’s only dangerous move is a jumping attack that you can avoid by following the green sign on the ground. This sign gives you an idea of where the boss will land, and you can avoid getting hit.

You will get the following rewards for defeating Hardrefill the Callous:

After completing three-quarters of the Word of Fate quest, you will find this Berserker Gravestone in the middle of Alberich Island.

Beigadr the Feared’s primary attack is lightning bolts. Other than that, he will use flashing orbs and thunder strikes on the battlefield.

Ranged attacks are the way to tackle this boss in GoW Ragnarok. All you have to do is dodge his attacks and use your best-ranged attacks to deal significant damage.

You will get the following rewards for defeating Beigadr the Feared:

Bosses: Svipdagr the Cold and 2 Sisters of Illska

First, complete the Word of Fate main quest and head to the eastern Barrens to find the Gravestone. Here you have to face three bosses.

The Sisters of Illska have combined health, so taking them first is the best option for you. They have fire and ice magic and mostly attack from a distance, so you should take them out first.

Once done with them, you can focus on Svipdagr the Cold. He uses two axes as the primary weapon, so you can take him out more efficiently using the range attacks.

You will get the following rewards for defeating Svipdagr the Cold and 2 Sisters of Illska:

You will find this Gravestone quite easily in the southern part of the Forbidden Sands. All you have to do here is take out Hjalti the Stolid to complete the quest and get the rewards.

The best tactic you can follow to defeat her is to stay as close to her as possible. She can’t use her deadly ranged attacks if you stay close to her.

Now all you have to do is use your best attacks on her and dodge her close-range attacks, which are not that difficult.

You will get the following rewards for defeating Hjalti the Stolid:

In Pilgrim’s Landing, you will find this Gravestone amid the town. Here you will encounter Hvitserkr, the Bold boss, and his minions.

He will use deadly attacks and get assistance from different minions, exploding upon touching you. Most of these boss attacks are ranged, so dodging is the key to staying alive.

After that, get close to him and deal as much damage as possible. Dodging his ranged attacks and getting close, and landing some good hits is the best strategy that you can use to take out this boss.

You will get the following rewards for defeating Hvitserkr the Bold:

After getting to the Sinkholes, head southwest toward the Celestial Altar. There you will see some stairs, and all you have to do is get to the bottom to find the Berserker gravestone.

Haklangr is the boss that will use the shield to protect his energy, but you can tackle this move using the widely effective Draupnir Spear.

This move will completely shatter his defense, and you will get a chance to land some good hits. But, again, your reflexes will play an essential role in this battle.

You can easily take out this boss if you move and attack perfectly. You will get the following rewards for defeating Haklangr the Bearded:

After reaching the Mystic Gateway, head to the west, and you will find this Gravestone at the very end. He is the only boss with access to Teleportation and Bifrost assaults.

The only thing you will need to handle berserker Skjothendi is the solution of Bifrost and Celestial Panacea Amulet enchantment.

Once you know how to deal with these attacks, you can take out this boss in no time. You will get the following rewards for defeating Haklangr the Bearded:

This berserker gravestone in God of War Ragnarok becomes active after you have defeated the other 12 Berserkers. Fighting King Hrolf is the most challenging thing in the game.

Only get into this fight if you have a Gear Level 9 or above. However, defeating King Hrolf has bigger rewards for you, including the Grave Mistake trophy.

The following are the other rewards you will get for defeating King Hrolf.

One thing that you should know about berserker bosses is the color of their health bar. For example, if the health bar color is green, it means the gear level of the boss is lower than yours.

If you see a red color health bar, it simply means there is no way you can defeat that boss. So avoid getting into these fights and upgrade your gear level first.

Moreover, it would help if you had a Resurrection Stone to self-revive yourself. Finally, you should enable the mid fight checkpoints to respawn yourself during the fight with the boss. In this way, you can defeat more difficult bosses easily.