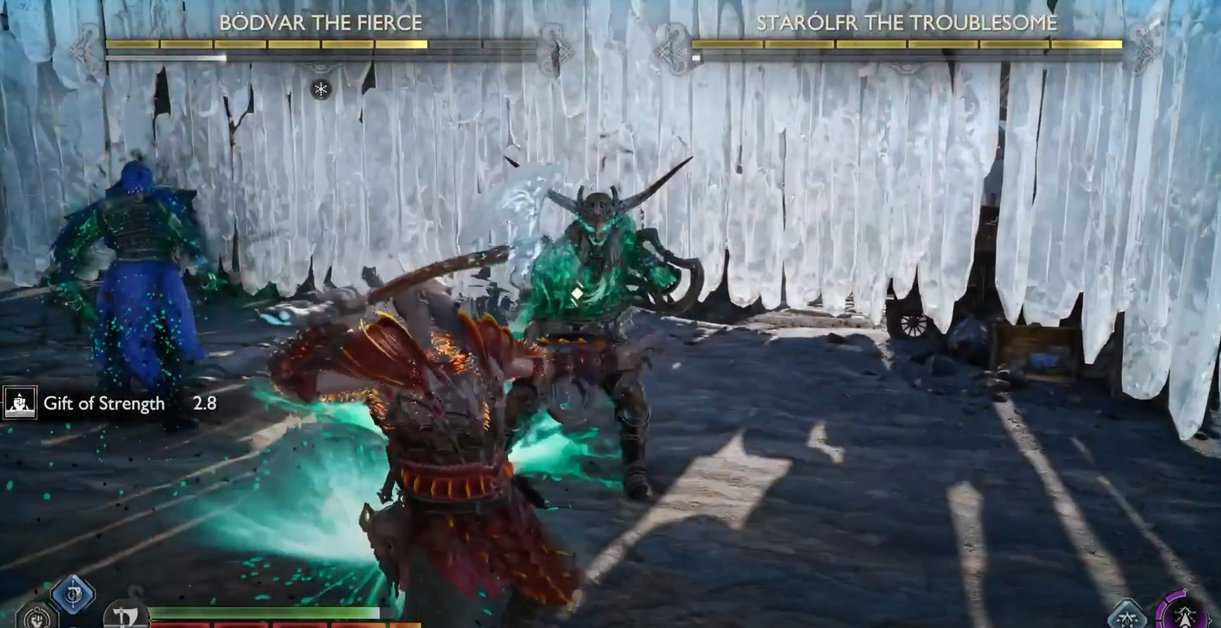 If you are struggling to defeat this berserker duo of Bodvar and Starolfr, allow us to explain the best strategy to take them down in Ragnarok.

Where to find Bodvar and Starolfr

There are a total of 12 Berserkers to take down and you can do that in any particular order to complete the Fit for a King Favor.

In God of War Ragnarök, Berserker Bodvar and Starolfr can be found at the Svartalfheim Gravestone, which is located in between the region of Jarnsmida Pitmines and the Applecore.

To further assist you and eliminate any confusion, the exact location of the gravestone is marked in the image below.

It is worth noting that the Berserker Bodvar and Starolfr spawn together so you’ll have to take them on simultaneously. Seems unfair but it is what it is!

Berserker Bodvar aka Bodvar the Fierce lives up to his name and comes equipped with two shields whereas Berserker Starolfr, also known as Starolfr the Troublesome, wields two swords.

If you’re not prepared, both these berserkers will give you a tough time and will have you on your toes for the most part of the fight.

However, this will not be the case because we will assist you in revising a proper battle strategy. Simply stick to it, and you’ll easily cruise to victory.

To begin, you need to target one of the two berserkers first and then move on to the second one. It is recommended to go after Bodvar first in order to increase your chances of victory.

Bodvar is a formidable opponent in his own right, but he is the easier of the two to deal with. However hee can be taken down with ease; all you need is to attack continuously until all his HP is drained.

Bodvar won’t give you much of a tough time apart from his Flash Light attack. This attack can even pierce through your shield so, blocking is not an option. In order to evade this attack simply fall back.

Bodvar can teleport around the arena to dodge your attacks and regain his stamina. Follow him around and don’t allow him to launch an attack.

As for the rest, charge Bodvar with aggression and eventually, he will fall. Afterward, you can switch your attention to Starolfr.

Starolfr is the more aggressive one and his HP drains rather slowly compared to Bodvar’s. Nonetheless, the strategy to take Starolfr down is similar to that of Bodvar.

You’ll want to attack Starolfr and not provide him with the opportunity to launch an attack because if you do, he will make sure you pay big times.

Starolfr can execute a few lethal attacks using his dual swords. It has the likes of a Dagger Barrage and pouncing ground slam that can totally devastate the enemies.

Using Dagger Barrage, Starolfr leaps into the air and launches a barrage of glowing daggers at you. This attack can cause quite significant damage. So, keep an eye out for it and evade it as soon as you see it coming.

To put an end to Starolfr simply pump on the aggression and slowly his HP will drain. Also make sure to dodge his attacks because otherwise, you’ll be the first to fall.

Once you have dealt with both berserkers, you’ll get one step closer to the Fit for a King Favor. But that doesn’t mean you won’t get any instant reward!

You would get your hard work paid with the following rewards: