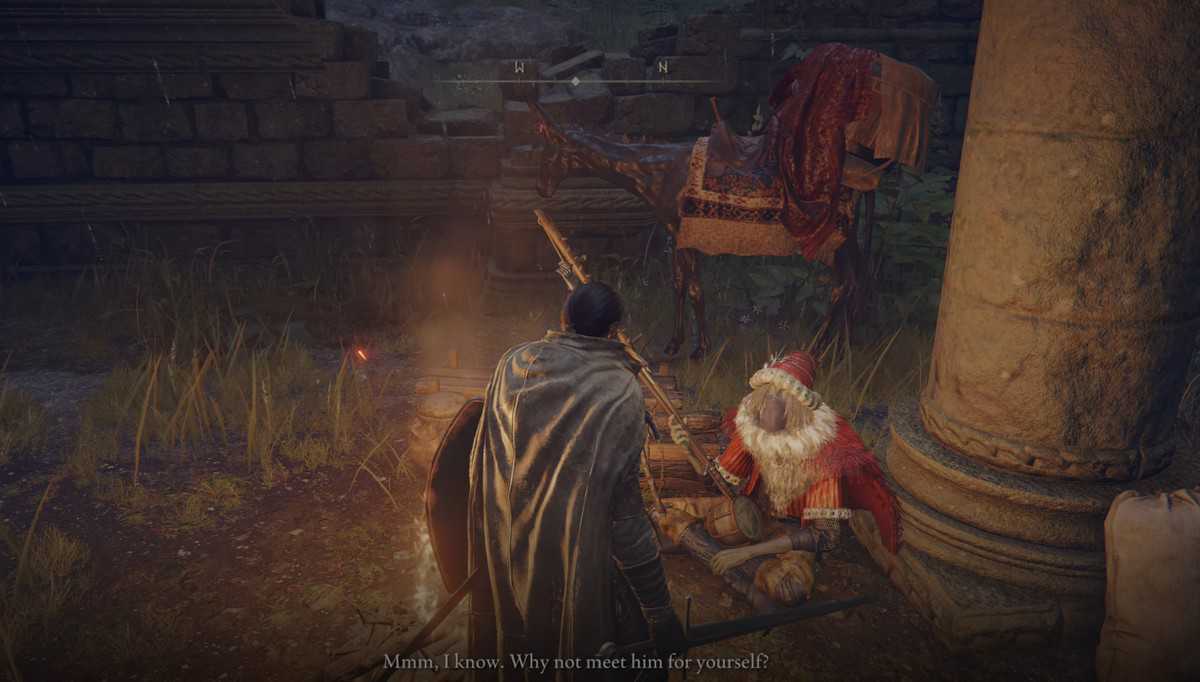 There are multiple NPCs that you will face in Elden Ring, where some will be willing to help you and give you quests while others will start fighting as soon as you interact with them. In this guide, we will be talking about the wolfman, a.k.a Blaidd NPC, and tell you where to Find Blaidd in Elden Ring.

Blaidd is a half-wolf and half man that will ask for your help in defeating a deadly enemy. However, your first interaction will be quite difficult against Blaidd as you have to hear his howls and call him.

We will explain the Elden Ring Blaidd Quest in detail as well to help you meet his NPC with ease.

When passing through the Mistwood Ruins, you will hear a howl from a distance.

Go to merchant Kale in the Church of Elleh and tell him about the howls. Kale will teach you a technique to get the attention of The Wolf Knight, who will be howling in the distance.

Go back to the location where you heard the howls and use the Finger Snap gesture to get Blaidd’s attention.

The Wolf Knight will ask you to help him in fighting a traitor named Darriwil. After completing Blaidd’s quest, you will get a reward, which will be your first interaction with him.

The second interaction with Blaidd in Elden Ring takes place at Siofra River Well, where you will have to find him as an objective to complete Renna’s quest.

When you arrive at the location, he will be nowhere to be seen, and you will have to enter the building and in the well using the magical lift.

Once down, take either of the two paths, and you will come across a waterfall. Take the magical lift to the next area and follow the path to the open area.

Look for the ledge in the open area, and you will find Blaidd overlooking the ledge. Speak with Blaidd, and he will tell you to find Seluvis to carry on Renna’s quest.

After completing the quest, Blaidd will vanish from the previous location. He will now be available to find at the Redmane Castle in Caelid.

Now that we have established who Blaidd, the Half-Wolf is and the traits that make him the most popular (and unique) non-playable character in Elden Ring, it’s time to look into his questline.

In order to find Blaidd in Elden Ring, start by traveling to Mistwood Outskirts. Once there, move towards the Mistwood Ruins. Keep going until you hear a wolf howling in the distance.

Following that, head to the Church of Elleh to ask Merchant Kale about the strange how. Here, he will give you the snap-finger emote.

Now you have to travel back to the Mistwood Outskirts and start moving forward till you hear the howl again. Use your Snap gesture and Blaidd will arrive in the Mistwood Ruins. Go and have a conversation with him where he will tell you that he is looking for Dariwill.

Now you can summon him to fight alongside you with that boss. Let’s move to the next step you will need to do for getting forward in the questline.

Go to Agheel Lake and speak to Blaidd

Travel all the way to Agheel Lake and enter the Forlorn Hound Evergaol. Here, you will be able to fight with the Darwill Boss along with Blaidd and after that, you can have a conversation with Blaidd again.

Now you will need to travel to the Road to the Manor. Here you will find Iji.

You will need to talk to him so that you can purchase the Carian Filigreed Crest.

This meeting will allow you to buy the crest that you can’t buy otherwise. After the conversation with him is over you can easily buy the Carian Filigreed Crest.

Back to Merchant Kale

Now you will need to travel all the way to the Ranni Rise so you can talk to the Blaidd again as a part of the Ranni the Witch Questline.

This also triggers the Ranni the Witch Questline and you can complete it as well by following our other guide.

After the short meeting with the Blaidd at Ranni’s Rise, he will tell you that he will meet you again at the Siofra River.

If you’re having trouble finding him, go to the entrance of the temple that has the corpse of some beast in it (Just northeast of when you enter the Siofra River) and then look to the cliffside on the left. You’ll see blaidd at a distance near a broken bridge of sorts.

At this point, the Blaidd Questline will link to two more Questlines which are Alexander the Iron Fist Questline and Seluvis Questline

Once the conversation with her is over you will need to go all the way back to the Siofra River Bank and tell Blaidd what she told you.

Go back to Iji

Now you will need to go back to the Iji at the location you visit before and talk to him. Blaidd had told him everything. After the conversation travels back to Blaidd’s location in Mistwood where he has left a message for you. Read the message in which he asks you to go to the Nokron and he will catch up with you,

To enter Nokron, you have to defeat Starscourge Radahn. You will encounter Radahn at Redmane Castle in Caelid and Blaidd will fight him alongside you.

Once you defeat Radahn you can move to the next step in the questline which is finding the hidden treasure of Nokron required for continuing the Ranni Questline.

Back to Ranni’s Rise

Once you find the fingerslayer blade from the chest in the Nokron you will take it all the way back to the Ranni RIse and handover it to the Ranni the Witch.

Go to the Site of Grace near it and talk to the Miniature Raani at the Ansel River main. From here you will need to progress through the Nokstella Waterfall basin and beat the shadow of Blaidd.

You have to make sure that you activate the Site of Grace close to it. Killing that boss will give you the Discarded palace Key.

After getting the key you will need to travel all the way to the Raya Lucaria Grand Library and open the chest you find inside it. From the chest, you will find the Dark Moon Ring and after that, you can move to the next step you will need to continue moving forward in the Blaidd Questline.

Defeat Astel, Naturalborn of the Void

After that, you will need to travel through Lake of Rot and Grand Cloister to find and beat Astel, Naturalborn of the Void. Defeating that Boss in Elden Ring will require some skills so you will need to be prepared for that.

After that, you will need to go to the moonlight Altar and defeat the Glintstone Dragon Adula there.

Defeating that boss will give you the Dragon Heart and Adula’s Moonblade.

Give Ranni the Dark Moon ring

Now you will need to go to the cathedral of menus Celes and drop down from the hole you find there. Inside that, you will find the Ranni the Witch.

After that, you will need to travel back to the Raani Rise and this time you will find Blaidd outside the Ranni Rise. You can defeat him easily using the Dark Moon Greatsword.

Once you are able to defeat him you can pick up his stuff and move to the last part of the Blaidd Questline.

Tall to Iji for the last time

Once you’ve completed the Blaidd Questline, it’s time to look into the hefty rewards you will be receiving. Upon defeating Blaidd in the Three Sisters, you’ll be receiving the famous Royal Greatsword. It is an excellent sword that primarily scales with Intelligence, Dexterity, and Strength.

Additionally, you will also receive Blaidd’s Armor Set, one of the heaviest sets in Elden Ring. However, it provides massive advantages during fights and won’t limit mobility as you might think it would. Therefore, it is excellent for players who depend on armor sets for defense. Players who have tank characters and builds will absolutely find it as a winning deal.

You will also be unlocking the ability to buy the Carian Filigreed Crest talisman by making your way to Road to the Manor and telling the giant blacksmith Iji that Blaidd sent you. Once this talisman is acquired, it reduces 25% of the FP cost of your weapon skills.

Blaidd, the half Wolf Lore

Blaidd the Half-Wolf is a loyal servant of the wicked Witch Ranni, and he is created only to serve her and obey her orders. Therefore, he knows nothing other than being faithful to Ranni, and his treachery towards her is a grave sin.

Blaidd is named as one of the most tragic characters of Elden Ring as he faces the biggest betrayals from his master. Ranni, who he puts at the highest value, is on a mission to defy the Greater Will. On the other hand, Darriwil, who Blaidd sees as an enemy, is actually helping the witch to claim the power to herself by overthrowing the world’s laws.

Giant Iji is worried that once Blaidd learns about this disobedience, he will go mad and rise as Ranni’s biggest threat, so he must be imprisoned for his safety, and everybody else’s as well.