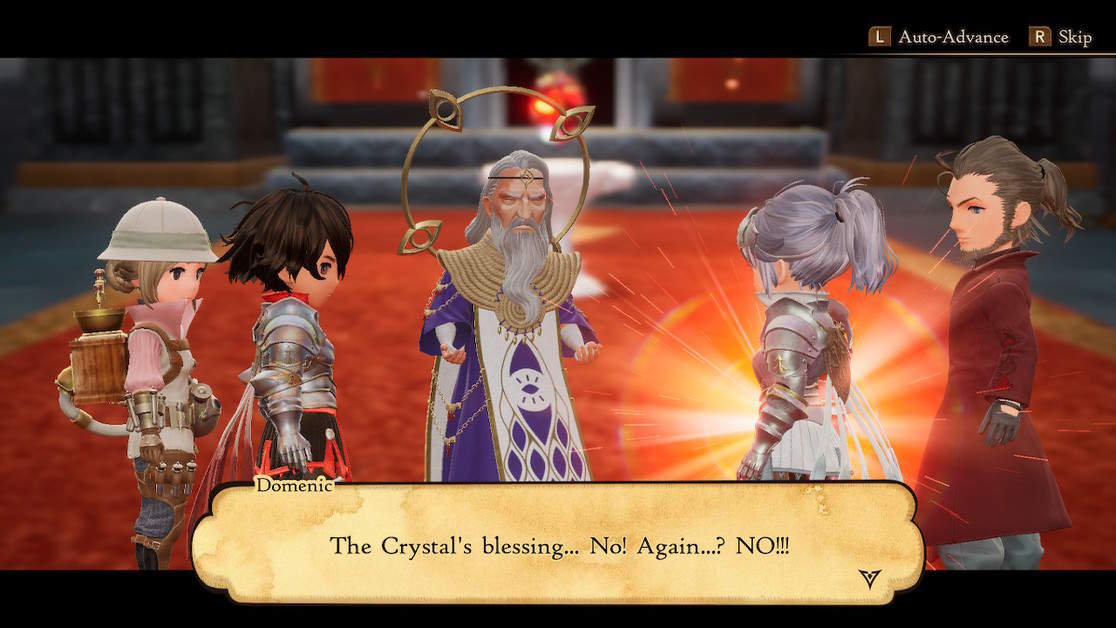 Hall of high hollies is a dungeon in the 3rd chapter in Bravely Default 2 where you will finally put an end to Archbishops’ ugly plans. You will be encountering a bunch of enemies and finally the final boss! Here, we will provide a detailed walkthrough to help you complete the Hall of High Hollies in Bravely Default 2 easily and even tell you about the chests you can find.

You will mostly be encountering humanoid enemies in the Hall of High Hollies. The most common enemies here are Holy Swords, Holy lances, Holy Maces, Holy wands, Abaddon and Ganga Beasts.

Ganga beast is weak to lightning and is immune to wind. Abaddons are demons that are weak to water, sword, light and Staves. They also absorb darkness.

Facing all these foes is worth it as you will be able to get 15 treasure chests on the way, so let’s walk you through that and the dungeon up till the boss encounter,

Move along the path towards the fountain, then go up and to the very left for the first chest containing 2x Remedy.

From the fountain, go to the southern route and head down and find a pile of books on the wall to the right with two torches. this will lead to the secret passage. Enter it to reach the second chest and get 3x Witch’s Whisper.

Return from the passage and go right until you reach some stairs. Go up and look up to find and hit a cracked wall. The passage will lead you to chest three which has a nifty Acorn Hat.

Keep going down until you can move right. examine the wall above till you see another crack. Hit it to grab chest four, but you need to kill two Gagana here for a Cuirass.

Return to the main hall and keep going right to reach a wall, hit the crack to reveal the hidden passage. Inside, you’ll see the fifth chest at the far right (2x Tengu Yawn).

Go up from chest two as described above to reach chest six being guarded by three Abaddons. Kill them for a Large JP Orb.

For the 7th chest you need to Return to the first floor and go to the far left. You will find another cracked wall, hit it to find 7400 pg inside.

Go near the first chest and follow it to a second staircase to go back to the second floor. Keep going on this path till you reach another set of stairs leading you down, go left, then down to find another cracked wall. Smash through it to the eighth chest (Artisan Gloves).

Now go back up the stairs and take the right path this time. Keep going, then take the stairs back down to the first floor. Go straight to find another cracked wall. Destroy it to unlock a path to the ninth chest (13400 pg) located on the second floor.

Now go back where you destroyed the wall and go left, which will lead to some stairs going upwards. You’ll now be at the second floor of the fountain.

Use the save point and go to the Dungeon Portal next to the staircase. The portal will take you to the third floor, now move to the staircase north, it should have you reach chest ten  with 3x Dreadstools inside it.

get back to the third floor and take the staircase to the left for the next chest containing (Heart Ring).

Go to the back of the third floor, then head down, past the far left staircase to the bottom one for the twelfth chest (8x Mini Ether).

On the third floor, go towards the staircase on the top-right to get your hands on  the thirteenth chest containing 5x Hush Pollen

Go up the staircase on the south on the third floor and head up. Then, go right immediately once you step foot upstairs into the secret passage. Go straight on the pathway, yu’ll eventually get to chest fourteen which has a Sands of Time item.

Take the path up now to reach the fifteenth chest, guarded by four Abaddons within. Kill the demons down for a Summoner’s Axe.

Make your way to the fifth floor by going back on the hidden passage and up the stairs, ignore the right turn,

This boss has 70920 Health and is weak to Darkness, Daggers, and Staves. He takes half damage from Bows, Fire, Water, and Lightning. Absorbs Earth. Domenic is an Oracle, so he is capable of Slowing you down and Stopping you. Try to wear items that have resitances or nullify these Ailments to make this fight go smoothly.

He has an answer for Physical Attacks with Stop, so ensure your melee fighters have the right equipment in place. Freelancers with Square One can take on time magic ability effectively. Berserker’s Unshakeable Will will make Domenic’s time magic effect useless on all your party members.

Domenic will spam Reflect in the second half of the fight, so in this phase, casting spells would have no use, keep to physical attacks only.

When Domenic’s health is really low, he’ll get seperate and begin to cast Bomb Arm, which he may even use as counter to attacks. White Mage or Salve Maker must be there so that your party members don’t die out.

Ensure you have ample magic resistance as we know that Domenic is a magic-oriented boss and will use Tirplga (Fire blizzard and thunder!),. Finally, a Shieldmaster is amazing here as it is able to use Bodyguard and protect your healer from Domenic’s spells and some of his Bomb Arm attacks.

Finally, the Oracle will die and you will have the Oracle job unlocked.