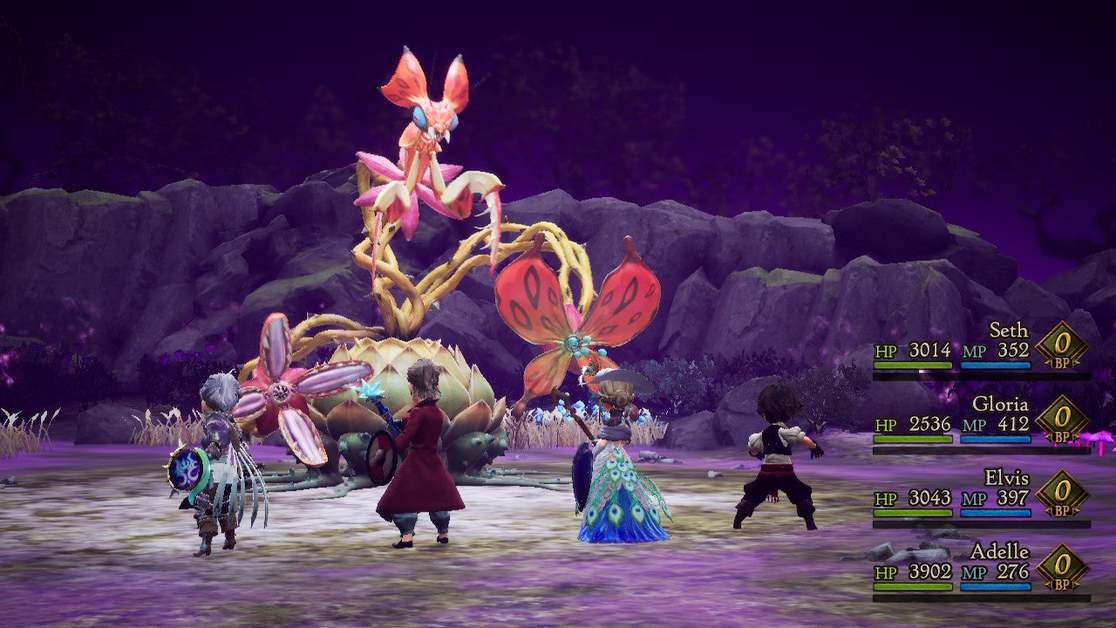 Empuse is an optional boss that can be found in Miasma Wood while doing sidequest # 044.  This Bravely Default 2 Empuse Boss guide will help you defeat Empuse in Bravely Default II.

The boss itself is not hard, but there are three of them, and each of them has different moves and skill sets. The two enemies that come with Empuse are:

Empuse has many abilities. It can use Killer Strike that allows it to randomly attack targets whenever it wants. Its Raging Flame deals fire damage to all its targets. The last of Empuse’s moves is Regenerate Limb, which, as the name suggests, allows it to recover one of its lost limbs.

Freankenfalcot has its own abilities. The first ability Frankenfalcot uses is Heal, where it heals one of his companions. The other abilities are Protectga and Shellga, which educe physical and magic damage taken respectively.

Papilloid can use Virus Crunch to inflict contagion to all party members. Its Icy Blast freezes all targets and can counter all target abilities as well. The last of its abilities is Fulmination which paralyzed all of its targets.

The boss has low HP and seems weak at first sight. But due to all its abilities, you won’t know what you are in after you have gotten through most of the fight. Don’t let its stats deceive you.

Although it seems a valid strategy to kill one of them then focus on the other, it is the worst strategy you can use in this fight. Empuse has the ability to regenerate any of its lost limbs, so even if you kill one of the three enemies, it will be back after a few moves with 50% of its max health.

Since the boss can counter Area Targeted Abilities, your best plan is to deal damage to each part equally without killing them while the other two are still strong enough to regenerate it.

Keep in mind the roles of each part. The left is support, the middle is damage and the right is ailments/ status effects.

Even though you are not trying to single them out, you should prioritize which part to deal with first and stay safe from. The right arm is the worst as it has nasty ailments like paralyze and freeze.

Beastmaster is the best job for this fight. Using fire beasts will be very effective as two of the parts are weak to fire. Pair your Beastmaster with a Ranger or Vanguard to attack the third part as it is weaker to physical attacks. This allows you to effectively divide and conquer.

Since you have more resources at the start of the fight, it is best to save them for the end of the fight. At the start, conserve your BP and keep on breaking down the enemy’s health. At the end, use your Braves and all the strongest moves. This keeps Empuse from healing and getting stronger while you are running low on everything.