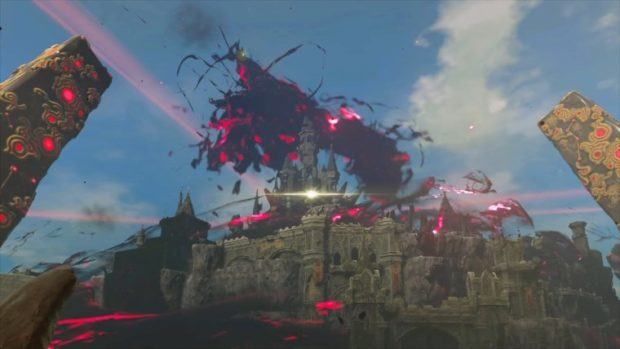 This The legend of Zelda: Breath of the Wild Walkthrough for Hyrule Castle will guide you through the area and how to defeat the Calamity Ganon and Dark Beast Ganon. Hyrule Castle is the place where Link’s journey ends, which will see him taking on the final boss to finally save the Hyrule.

There are multiple ways to infiltrate the Hyrule Castle. Also, if you have enough stamina upgrades you can bypass a vast majority of the Castle.

The best way to approach Hyrule Castle is you go from the north. Travel towards the Woodland Tower and head west. However, try not to get too close to the castle as you will encounter Bokoblins on horseback that will give you trouble if you get detected.

Travel towards the massive pillar and take a look at Hyrule Castle from there. To the left side of the castle, you will notice a small waterfall that will take you to the opening of a mine.

Paraglide downwards until you reach the lowest platform. Just beyond the cluster of rocks, you will notice two guardian turrets on the platform higher than you, at each side of the entrance. You don’t necessarily have to take out these Guardians, with some tactical running you can make it inside the mine.

After getting into the mine, you will have to defeat Keese and explore your surroundings. Jump in the cart and place a bomb in the hole and ride to the other side of the mine.

As you go forward you will encounter a Stone Talus in this unground area, however, you can simply avoid the encounter. Just climb the wooden planks to reach topside.

Go ahead and throw bombs to get rid of the corruption eye and there will be a Lizalfos nearby, defeat him and enter inside the Library.

Inside the library, you will find a single Lizalfos to the other end of the room. This Lizalfos usually lays down on the ground so sneaking up to it and deliver a killing blow would be the wise thing to do.

You can use Magnesis ability to pull away the wall on side of the room. One side leads down to the docks towards the shrine and that is where you want to go as here you will find a powerful weapon and a Silver Rupee on the other side.

Once you have cleared the docks, go back to the library and climb the stairs and you will encounter another Lizalfos.

Defeat it and make your way to the balcony where you will find two more Lizalfos one on both sides of the balcony. You will go to the side where the ground in damaged.

You will notice a bridge close to your location on which use your magnesis. If you do not want to do that, you can simply leap and hug the wall and then make your way to the other side where you will encounter yet another Lizalfos shooting arrows at you. Try and shoot it with an ice arrow to freeze it and make it across and then defeat it.

To reach to the third floor of the library, you have to run for a bit and do some climbing for it. If you need some fire power then there is a Great Frostblade weapon in the next room. Once you go down the hallway, you will encounter yet another Lizalfos in the corner.

Defeat it and continue on to the next room where you will find a large Moblin and clear the room.

Then go up the stairs and you will find that stairs are missing, you will have hug the wall and climb again to reach to the hallway. Take a right and then run ahead to reach the Dining Hall.

Inside the dining hall, you will find four Moblins. Defeat them and clear the room of the items if you want to. There will also be a cooking pot in the dining hall, it would be recommended that you cook food and replenish your health. After you have cooked and replenished, pass through the doors to get back outside.

Once outside, take a right and this path will lead to the area guarded heavily by Guardians. If you are well equipped then you can take them on otherwise its not recommended.

The safer way is to climb your way up. As soon as you exit the dining room then take a left head through the doors to get back outside but still, there are some guardians up ahead.

Follow the path that is going upwards and shoot the eye of corruption as you go up. There will be a waterfall nearby, equip the Zora Armor and swim up the waterfall and keep going till you reach the top of the castle. Now it is time to take on the Calamity Ganon.

The battle with the boss will be different for every players and will on whether or not you have progressed inside of the game. If you haven’t defeated the Divine Beasts in Legend Of Zelda Breath Of The Wild, have not defeated will appear here.

However, if you have been following our walkthrough then you have already taken care of the Devine Beasts. Not only this, all four Devine beast will be on your side that will attack the Calamity Ganon at once and take down half of its health and then the boss fight begins.

Calamity Ganon is basically the biggest of four Ganons that you have fought in various shrines and will also mimic their attacks too.

Calamity Ganon has couple of melee attacks which it will execute with its sword. During the first phase of the battle fire Bomb Arrows or Ancient Arrows at him. While these will not deal serious damage but, they will slowly but surely take their toll on him.

As it executes its melee attacks use the Perfect Guard as well as when it shoots the laser at Link. However, it is important to note that it is very dangerous as one little mistake will cause you to take some serious damage.

When Calamity Ganon tries a horizontal slash, jump backwards just before the sword hits and if it tries vertical slash then just jump to either side to avoid taking damage. With precise timing and patience, you will be able to knock it down.

In the second phase, the bomb arrows will have no effect on Calamity Ganon and it will start to get more aggressive with its laser shots.

He’ll also have another attack here he launches his spear at Link. When Calamity Ganon comes crashing down it will have a blue circle around him, if Link is inside this circle then it will take damage.

Just try and stay close to it but not too close just close enough so that it executes its melee attacks. When it does, time your Perfect Dodge perfectly and just keep slashing it until it is defeated.

Now the final battle begins and you will collect the Bow of Light through Link. Linking to the bow will allow you to fire Light Arrows and will give unlimited ammo.

Also, as much scary the Dark Beat Gannon looks it does not have much in terms of attacks.

It will shoot beams of fire from its mouth and as long as you are not riding straight in front of it, you will be safe. As the battle begins just ride around until Zelda talks to you.

Zelda will create glowing areas for Link to shoot his Light Arrows on the Dark Beast Ganon. The last spot will appear on top of Ganon’s forehead. However, you will not be able to hit it as Ganon will close its eyes. When a massive updraft appears right in front of Ganon use the paraglider to get up and use allow motion to strike the arrow in its eye and defeat the beast.