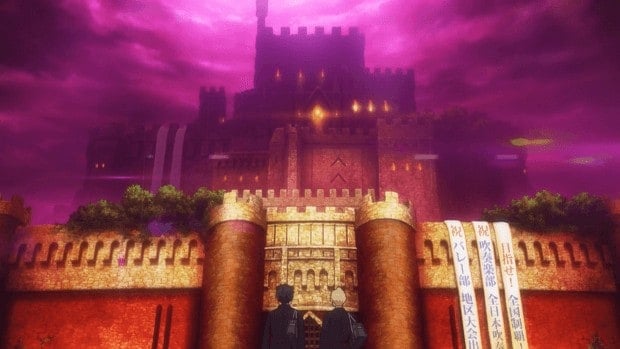 Persona 5 Kaneshiro Palace Guide to walk you through the palace, defeat the enemies in it, grab loot, and defeat the boss at the end.

Kaneshiro Palace in Persona 5 is a world within the Palace created by Junya Kaneshiro. Inside the palace, you’ll face Sui-Ki, Oni, Angel, Yaksini, and High Pixie. In addition to these, there are several puzzles that you must solve to reach the end.

For more help on Persona 5, check out our Tips and Strategies Guide, Confidants & Arcanas Guide, & How to Level Up Fast Guide.

Observe the front door that Makoto wrecked; its locked, then observe the right-hand piggy bank statue to find a secret entrance.

Enter and loot the area, go up the stairs to find some money. In the hall, defeat the two shadows to head to the next room where you’ll see a shadow entering the elevator and going down.

Find a chest behind the bank teller and head inside the room on the left-hand side. Find another chest below the stairs and head up.

Defeat the dog shadow and the others and head to the corridor. Press the red switch at the end to open a shutter gate to create a shortcut to the stairs at the start. Head back towards the central area of the map where all the benches are and use your third eye to see a lot of filing cabinets.

Climb up to proceed through the air duct and drop down in the security room that’s locked, defeat the four Horsies.

Once done, pick up the map along with the keycard and open the door using it. Now head to another door that was previously locked near the area where the dog was and head down using the elevator shaft.

After the elevator stops, proceed through the duct, over the parchment and drop down on the ground.

Once done, find a safe room in the unexplored area. Head to the corridor with the security cameras and use your third eye to get to the end of the corridor and disable them. Enter the door on the left.

You’ll find yourself in a room with two possible paths. The door in the front leads to the stairs.

But this take out only one of the two cameras on the stairs. Head to the southwest edge of the map to destroy another switch behind a door to take out the other camera, theres also a chest in this room. Now head up the stairs.

Straight ahead, down the stairs on the other side, the room in the front has three money bags, but under camera surveillance.

Avoid heading into this room and just walk down the corridor. You’ll come at a locked path beside a door, go through the door to come to another locked path with a chest behind it, along with 2 other doors.

The door in the front will take you to a large room with a lot of staircases in it, has a lot of cameras. Avoid the cameras as they might trigger fences.

The other door has stairs that lead to a locked door unlockable using the keycard you gained earlier, it’s a shortcut to the central area right at the beginning.

In the stair room, move along to the other side and drop down from the pipes directly in front.

Go across the vault and up the stairs to come at the chest behind the locked path you came across earlier. Enter the room on the right and use the duct to get to the locked room that has the switches in it.

Break them to disable cameras in the stair room. Unlock the door from inside using the keycard. Another locked door outside will take you to the stairs room.

Go past the guards in the stairs room and arrive in the security room. Deal with the demon that comes using Magic and head to the previous area to deal with the other demon using Nuclear. Both demons will give you one key to the vault. Now grab the map, return to the vault, use the two keys and proceed to the next area..

Kaneshiro Palace – Inside the Vault

Proceed through the corridor, head left and through the south door. Once inside the long corridor, deal with a couple of shadows while avoiding the security cameras. Once done, crawl through a duct in the small room at the end of the corridor.

Climb the narrow ledge at the very end and drop down to find another duct before riding the elevator. After grabbing all the loot in the area, head to Kaneshiro. After defeating the enemies, head to the elevator.

After heading out of the elevator, observe the panel and enter ‘0102’ and head down the stairs. Now head up another set of stairs and enter ‘0931’ as the passcode. After you’re forced back into the vault area, head inside Area 3.

Once inside, make sure to avoid cameras and destroy the switches to disable them. After arriving in the room with the electrical fences, exit the room and use your third eye to find a ledge to climb up.

The next thing that you need to do is to crawl through the duct, open the chest, and find another duct in the southwest edge of the room. Climb the stairs and head down the hallways to find another terminal which requires ‘2319’ as password.

After being forced to the vault area once again, head inside the newly opened area to come across two Oni and a Takeminakata. Once done, align the walls and head down the stairs into the warehouse. Find a duct in the bottom-left of the area.

After you’re on the other side, use your keycard to open up the shutters and head down the hallway while avoiding cameras. The final keycode that you need to enter is ‘1841’.

The first phase of the fight is fairly easy. The boss attacks twice per turn and will cause Fear status when near death. I highly recommend conserving as much SP as possible for the second phase.

There are a few things that you need to have during this encounter i.e. Tarunda for Pig Robot, Queen’s Energy Shower for Fear, and Media for healing the teammates. At about 25% HP, the boss will gain a new attack that can one-shot the entire party. Make sure to avoid it and you should be good to go.