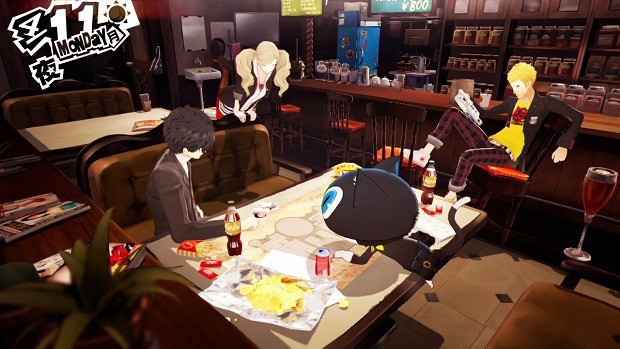 With this Persona 5 Power Leveling guide, you will be able to level up efficiently. The method itself will allow you to earn 70,000 XP per run; and it doesn’t even involve a whole lot of grinding!

It’s a bit of a broken method, or an oversight really; we wouldn’t recommend you use this and ruin your first-time playthrough

There are certain periods of time, during which you will gain XP boosts in Persona 5; we have listed down the two methods you can use during your playthrough.

Central Garden’s Apsaras
One such location is the Central Garden. It is located in the second dungeon and is essentially a safe room. You will be able to fight a few weak enemies there that will give you a huge boost in XP. The enemies are actually Apsaras that are known for not being able to deal damage to the player directly. These are very easy to take down.

Mementos’ Reaper
Another farming moment relates to the Reaper in Momentos. But you can only utilize this on specific date i.e. 13-15/11 and 8-9/12. Only on these specified dates will you be able to farm the most XP out of defeating the reaper. It will give you a boost of a hefty 72000 XP.

For this to work, the Reaper has to be in a despair state. If not, you can use the Breakout ability to escape and then come back to try again.

This also holds true for the Reaper but do note that the Reaper doesn’t always start in despair state so prepare accordingly! What you basically need to do is to head to a waiting room and wait until the Reaper arrives.

After the Reaper appears, see if it’s in the despairing state or not! If it is, attack and quickly finish the battle, otherwise, escape the area and come back at a later stage.

As mentioned earlier, the method is a hit or miss but is arguably the most efficient one out there!

With each successful attempt, you’ll earn about 72,000 XP which is massive. There are a few things that you need to do! Firstly, make sure to save beforehand. Secondly, have Hifumi’s – after 6/25 – the rank-5 ability called Breakout to have 100% escape rate.

These bulk of Mementos are only given to you by Mishima. Only when you hang around with him or talk to him. So, make sure to take out time to mingle and converse with him once in a while.

Alternatively, you can also have the Star’s Rank-9 Confidante ability which also helps in escaping. Moreover, this only works on each floor once.

To repeat the process, head to another floor. And lastly, max out the Moon’s Confidante ability to earn even more XP than usual.

You can only defeat the Reaper once in a level, you will have to move to another location to repeat the process.