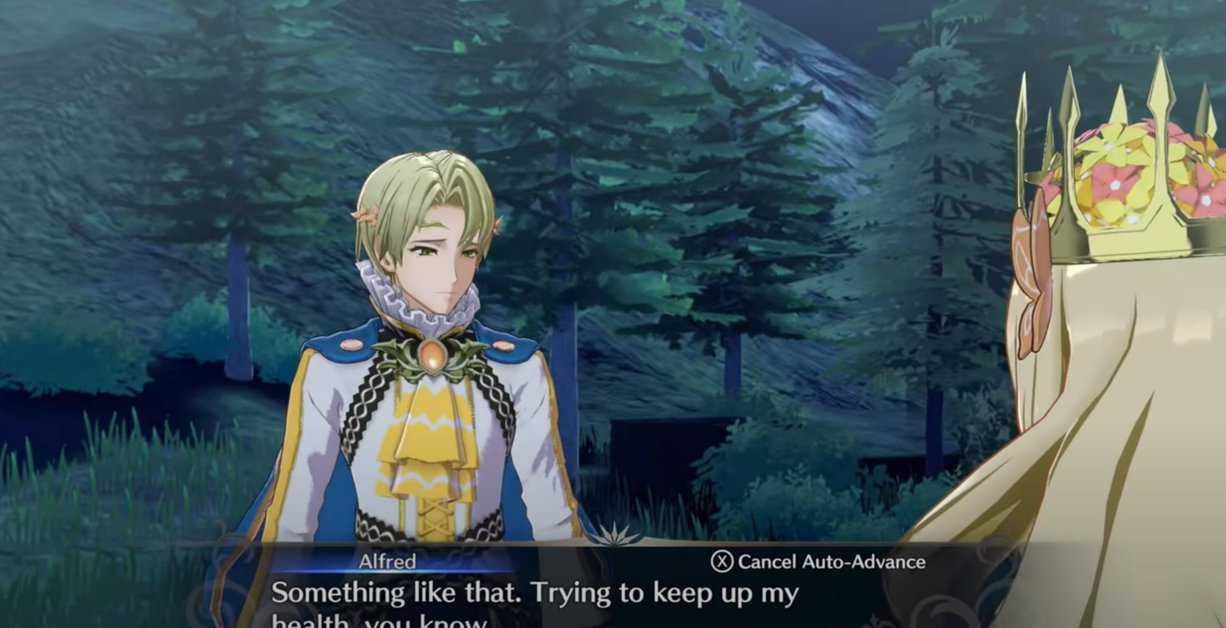 Alfred in Fire Emblem Engage is the prince of the Kingdom of Firene and the older brother of Celine. Alfred is a very talented and skilled cavalryman, and because of this, he is highly mobile and can cover a large area in a single turn easily.

Alfred is an expert with lances and a high-defense character in Fire Emblem Engage. He fights alongside the divine dragon and is a laid-back young man. He is a good-natured, well-behaved, and cheerful fellow who adores flowers.

How to recruit Alfred in Fire Emblem Engage

Alfred will join players mid-battle during Chapter 3 of FE Engage, along with Boucheron and Etie. Recruiting Alfred is part of the early story of Fire Emblem Engage so not much to do here besides fighting in the Ring Vault during Chapter 3: Hostilities.

Alfred is a Noble class cavalry unit that has a B proficiency with a Lance. The class that best suits him also depends on this to a great level. The best class recommended for Alfred is the advanced class Avenir.

Upgrading to the Avenir class allows access to the Golden Lotus skill that prevents 50% of the physical damage a character takes during the battle. This class can be unlocked via Master seal in FE Engage. The master seal is used to convert class from base to advanced and can be purchased at an item shop in the plaza.

However, players need to develop a good bond with the emblems to earn proficiency in weapons, which will cost them a few bond fragments in FE Engage.

While the ideal skills for Alfred would depend on the class you pick for him, we would recommend selecting Resolve+ and Lancer Power 5. Resolve+ requires raising your bond with Ike to level 18 while Lancer Power 5 requires a level 18 bond with Sigurd.

Both these skills work in conjunction with each other. With Lancer Power 5, Alfred gains +10 attack but loses 10 avoidance. This makes him more susceptible to damage. Thankfully, that is where Resolve+ comes in. If Alfred is below 75% health after combat, he gains +7 Defense and Resistance.

Alfred has the Self-Improver personal skill. This skill grants Str +2 for 1 turn in case Alfred uses Wait without attacking or using items. Therefore this can get players a lot of strength.

In Fire Emblem Engage, players can give gifts to the characters to develop a good relationship with them. Players should keep in mind that a gift of horse manure and Sheep Wool are the ones that can upset Alfred; therefore, never give that to him. Other than that, there’s nothing to worry about.

While every gift will improve bond level, the best gifts that players can give to Alfred are

All of the above gifts will boost your relationship with Alfred. Every time you want to give Alfred one of these gifts, just strike up a bond conversation with him and offer the gift, which he will gladly accept.

Emblem Rings in Fire Emblem Engage house spirits of previous characters from the franchise, aiding players in battle and improving combat. These emblems can help players get the desired weapon proficiency when changing classes.

The best emblem choices for Alfred are Sigurd, Leif, and Roy.

Sigurd has the Canter skill; therefore, the unit can move 2 spaces after acting. Alfred, when paired with Sigurd, becomes an expert in hit-and-run combat. He can charge from a huge distance to run into enemies, clear an entire line with Sigurd’s Override technique, and then sprint back to safety.

Leif is an excellent emblem on its own, but when coupled with Alfred, it may be used to quickly change Alfred’s class due to its ability to grant weapon proficiency. Otherwise, Leif will be a great fighter and be able to defeat many enemies.

Roy is the emblem of Binding and has a holdout skill; thus, the unit always emerges from combat with at least one HP if it had 30% or more HP at the beginning of the battle. When paired with Alfred, Roy will lead the attack and set the whole area on fire with his explosive Blazing Lion. Roy’s holdout and rise-above skills will significantly improve Alfred’s chances of survival.