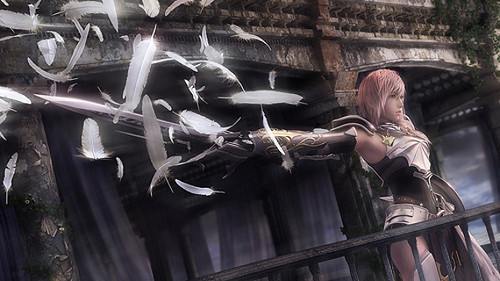 Final Fantasy 13-2 encourages you to explore the hidden areas and find hidden objects like Fragments by completing several side-quests that are a necessary evil if you are aiming for platinum trophy or 1000 gamer-score points.

In this guide we will outline some of these side-quests that are required for different achievements and trophies. If you find any note-worthy side-quest missing, comment and let us know. We will keep updating this guide based on feedback.

Ghast Fragment
To get this quest you are going to have to talk to Chester near Chocolina. The Ghast that you need to locate can be found in the tunnels towards the North-West of the map.

Vita Lyric
Talk to Morris once you unlock the south-west area of the map; afterwards use Moogle Hunt to find the treasure sphere in the tunnel west of Morris. Get the Army Comm Device and give the item back to complete the quest.

Anima Miseria
Talk to Jed found in Lamentable Rest. Now head to Bresha Ruins 300 AF to find the flower located east of the Chocobo and Lex to obtain a silver petal. Head back to Bresha Ruins 005 AF and return the item to Jed to complete the quest.

Unio Mystica
Talk to Captain near Chocolina to get the quest. Now you are tasked to find and bring back two capsules. Right from the gate you will find an out of phase treasure sphere left of the entrance. You will find the first capsule in this. The second treasure sphere containing the second capsule can be found within the east side of the west tunnel. After obtaining both of the capsules return them to the captain.

Ars Symphonica
Talk to Cordelia found in the Excavation Site to get the quest. Now head to Control Center towards North-West and use Moogle Hunt to reveal a treasure box. Open this box and return the items to Cordelia.

Heart Prism
The Heart Prism quest can be obtained after beating Gogmagog and heading North-East of Town Square in the area New Bodhum 003 AF; here you will need to talk to Nell to start the side-quest. You can complete the side-quest after acquiring Giant’s Artefact.

You can find the Medical Kit after you climb the wooden ramp in the Beach Front on the left path.  Once you find the kit, hand it over to Nell.

Aloeidal Fragment
You are rewarded with this fragment after meeting Hope for the first time.

Pathos Jewel
Climb onto the scaffolding in sight and under the chin of the giant is a hidden treasure. Use Moog’s reveal ability to find it.

Misery’s Bead
Find Brenda by the Gorge and talk to here who will ask you for a Behemoth Fang, find one and defeat it to acquire the Fang and then bring it back to her.

Innocense’s Sacred Sphere
There is a girl at the excavation site who wants to find her watch. In order to acquire this side-quest you are going to have to unlock Yaschas Massif 010AF first. In this area, go down the ravine and use Mog Throw to retrieve the watch.

Orb of Clotho
Talk to Marlow who will want you get him a Stone Tablet which you can easily get from Yaschas Massif 010 AF right before Chocolina. Deliver the item then to Marlow.

Sword of Lachesis
This quest is given by Bridget who will need you to bring her a flower which only grows a fruit during an eclipse. For this, you are going to have to grab the Fruit of Fenrir, found in the same areas as the previously mentioned Stone Tablet in Orb of Clotho. In order to get the mentioned item you are going to need to get to the treasure box which is only accessible through a Chocobo or a Moogle Throw. Get the item and return it to Bridget to complete the quest.

Mirror of Atropos
Talk to Lester at the main square who will assign you to finding the Falling Stars and thus you must set out to find three crystals.

The first Emerald Crystal can be found in a hole on the west of the field obtainable by using Moogle Throw.

Onyx Crystal can be found in a treasure box south from the middle of three barriers. Try to spot a pile of stone debris and use Moogle Hunt there to reveal the box.

Ivory Crystal can be found in a treasure box at the south gate under the metal stairs.

Return all three Crystals to Lester to complete the mission.

Gorgyra Fragment
Duncan by the ramp will ask you to find the Gorgyra Fragment which can be found after you clear the south-west area of the map. It will be found randomly whilst walking around.

The Archylte Steppe ??? AF
Before we go on ahead and embark on this journey let us discuss a few basic controls to change the weather.

Fragment of Invincibility
In order to complete this quest you are going to have to find all cactuar statues and defeat all the Gigantuars. After this, talk to the Hunter outside of the Chocobo pen at the Nomad Camp so you can ride a chocobo. Now return to Myta and talk to her to get the quest. Set the weather to cloudy and go to the marked destination ready to face Immortal.

Ochu Fragment
For this quest, make sure you have defeated all three of the Gigantuars and then talk to the Hunter outside the Chocobo camp. Talk to Tipur in the nomad camp to get the challenge. Set the weather to rainy and go to the marked location to get to Ochu.

Yomi Fragment
You must have acquired Ochu Fragment in order to get the Yomi Fragment. Accept the side-quest from Tirpur and set the weather to stormy, get a chocobo and go to the destination. Now go to the cliff located south and jump to fly across. Serah and Noei will dismount and Yomi will attack.

Long Gui Fragment
Set the weather to sunny and embark on a rather dangerous adventure to eliminate Long Gui for the final fragment.

Idea Circuit
Talk to Alyssa on the 50th floor and go to the room southeast of Chocolina and open the treasure box after finding it using Moogle Throw and thus find the Paradox Agent Type A. Go to the next room now located north-west and use the computer terminal which will start the Idea Circuit side quest; simply interact with the computer a second time to complete the quest.

Enigma Codex
In the same room where you completed the Idea Circuit quest, interact with the other computer to begin the side-quest. It is worth noting that you will not be able to complete the side-quest until you acquire the Artefact of Rebirth by completing all the story objectives of this area. Collect the Paradox Agent Type B found in the treasure box on the 49th floor. Return it to the 50th floor computer to finish the quest.

Difference Engine
You will be able to acquire this third quest in the same room you got Idea Circuit and Enigma Codex. Go to the north-eastern side of the 49th floor. Use the Moogle Throw to ibtan the item. Now return to the 50th floor to turn in the quest.

If you are explorer type who doesn’t run from any fight, you should be able to complete 90% of the Enemy Report during the main-story. There are few monster that are a bit tricky to find and they are:

Demi-Fal’Cie Adam (3rd Form) – You will find it in Augustia Tower AF200. It requires you to intentionally fail the QTEs on the 2nd form.

Sacred Beast Monsters – These three monsters spawn in the northeast corner of the City of Academia AF500. Look for them in the circular platform directly to the right of where the Final boss battle begins.

This platform either spawns one monster or a group of two. After you have killed one or two of these at this platform, you will have to do a time-reversal on the area and go back all the way to the northeast corner for the next spawn.

Among these ‘The Sabotender (Cactuar)’ is the most tricky to defeat. When you are fighting with male in Archylte, don’t defeat it right away, defend and heal for a while because it may transform into ‘The Sabotender’.

There is one rare Sabotender ‘Metal Jabotender (Gigantuar)’ here as well. It appears in Archylte Steppe and looks like Atilla, Death Gaze, Don Tonberry and other rare forms of monsters.

Gaiselikku – You can find this monster in the northwest side of the City of Academia AF400. You will first see it in the Episode 4 and the encounter may have resulted in your death. Return there and take your revenge.

Dreadnought – You can find this monster on the south-side of the Vile Peaks AF010 in metallic tunnels. Dreadnought has a very low spawn rate and it will take a lot of running back and forth to find it.

Academia Rank: Paradox Professor
Look for an NPC in the southeast section of the map in City of Academia AF400. The NPC’s name is Miss Horizon, she’s up in the rafters next to Chocolina in the South East (bottom right) area of Academia 400 AF (the one swarmed with monsters). You will see Chocolina first when you approach her, she is behind a green forcefield that you are able to walk through (NOT THE ONE BY THE SHOP).

Bring her a 100% completed map to get 10 fragments. 10th fragment is a reward for completing all 9 locations specified above. You will need to travel between different times (past, present, future) in which a location exists. You will find different sections of the map blocked off in one time and accessible in other.

You may need Chocobos to reach certain sections of the map. You can check the completion of a map by looking at the map or the map items listed under ‘Key Items’. Get the fragments once you have completed all 9 locations.

Brain Blitz Quiz Answers
You will find Captain Cryptic in City of Academia AF4XXX and upon completing his quiz you can win up to 5 fragments. The most annoying part of this side-quest is finding Daddy Bear because he vanishes each time you answer his question and respawns randomly at different locations throughout City of Academia.

Captain Cryptic is not the only one with questions, there are four terminals scattered throughout City of Academia where you can take Brain Blitz Quiz. For detailed quiz answers for these four terminals, follow the links below:

Serendipity – Chocobo Racing and Slot Machines
You can read our in-depth Serendipitous guide on how to play these mini-games and unlock the trophy/achievement.