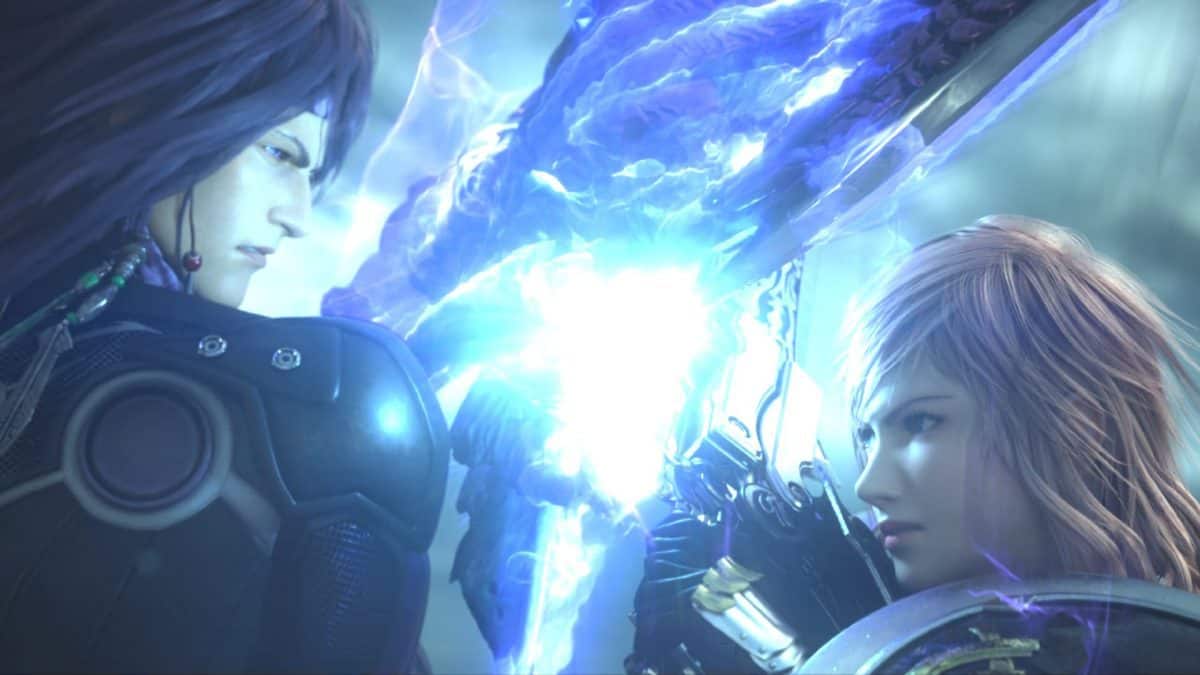 There are 4 of these terminals and each terminal has 70 questions each. Answering 10 consecutive questions at any terminal will reward you Fragments, CP and treasure.

You will find some of these questions fairly simple while others may make you scratch your hair. So to make things easy, we have compiled answers a list of answers that will save your time and help in earning the respective rewards.

Note. Since the sequence of question asked can vary, the questions in this guide are listed randomly. You can search (Ctrl + F) the concerned question using the specific keywords.

Q. In 2 AF, an air shuttle became available in the Yaschas Massif. What are the condensation trails of the shuttles that were named after shooting stars called?
A. Comet trails

Q. What title was awarded to the winner of New Bodhum’s swimming competition?
A. Speedy Sahagin

Q. What was Lighting’s rank when she was in the Guardian Corps of Bodhum?
A. Sergeant

Q. Why do people visit the small cottage on the icy terrain of Rudka?
A. To see the rainbow-colored mustache of a local

Q. With the fal’Cie no longer in power, the delivery system came to a halt. How was Palumpolum able to resume commercial activity so quickly?
A. Abundance of goods

Q. Kaltz produced a line of shoes that allowed people to walk on water. Although the product was recalled was recalled several times, the current product is flawless. What is the name of the product?
A. Floaters

Q. How does a tonberry carry its knife?
A. It carries it in its left hand

Q. How does Hope’s Edolon, Alexander, make his exit?
A. Breathes fire and flies away

Q. Hyperion is the fastest competitor in the chocobo races. Which of the following did he recently beat in a race?
A. An airbike

Q. Being oblivious to small, everyday occurrences is called a ‘tonberry’s what’?
A. Stealthy walk

Q. In Noel’s world, the earth was barren and there was little sign of life. What did his people use to build their homes?
A. Scraps

Q. In Sunleth Waterscape 400 AF, which monster showed intelligence by traveling in packs?
A. Flan

Q. In the film ‘MI: Sahagin,’ what does the hero use to get past the security system without alerting his enemies?
A. Deceptisol

Q. In what region of Gran Pulse can the ruins of Paddra be found?
A. Yaschas Massif

Q. Fireworks were created by a Bodhum resident who used explosives for work. What was his occupation?
A. Miner

Q. Mixing soda water and what prompts sweating and is great for increasing one’s metabolism?
A. Flanbanero juice

Q. In 0 AF, monster figurines became popular on Cocoon. which monsters were the most popular?
A. Triffid and mandrake

Q. In 1 AF, an old flanbanero flower was discovered in crystal. The color was a cross between crystal and a flanbanero. What was the color?
A. Muddy violet

Q. What color is Snow’s hair?
A. Blond

What does Noel have equipped on his left hand?
A. Black armlet

Q. What does Snow’s Eidolon, Shiva, transform into in gestalt mode?
A. Bike

Q. An Academy scientist wrote a thesis proving some monsters are rattled by what certain human action?
A. Tasking at it

Q. Before the crystal pillar appeared, in what state was Cocoon?
A. Floating in midair due to the fal’Cie’s powers

Q. Which of the following is the highest quality wool?
A. Fluffy wool

Q. Which of the following will not be sold at Chocobo’s Fashions, which is scheduled to open next year?
A. Hermes’ Shoes

Q. Which role allows you to heal yourself and your allies instead of attacking the enemy?
A. Medic

Q. Which role allows you to strengthen your allies by infusing their attacks with elemental power?
A. Synergist

Q. What move was invented by Cocoon’s 13th boxing champion?
A. Goblin Roll

Q. What refreshment do chocobo race contestants drink before their race?
A. Chocobo XS

Q. What role is Serah capable of?
A. Commando

Q. What does Yuj think of Serah’s outfit that seemed to appear out of nowhere?
A. Stylin’

Q. What facility was created on ancient Pulse by the fal’Cie to protect the people from intruders?
A. The Ark

Q. In 20 AF, which region was crawling with bounty hunters due to the growing number of monsters in the area?
A. Bresha Ruins

Go to next page for answers to remaining quiz questions.

Q. Jones is an infamous treasure who always seems to engulf his discoveries in flames and fail in his excursions. What kind of weapon does he wield?
A. A flamethrower

Q. What happens to Fang’s Eidolon, Bahamut, in gestalt mode?
A. It flies with Fang on its back

Q. What is Noel’s weapon of choice?
A. Two swords

Q. What is the best university on Cocoon?
A. Eden Central

Q. The cost of the most expensive fireworks used at Bodhum’s fireworks show is equal to the population on Cocoon at its highest. How much is that?
A. Approximately 20,000,000 gil

Q. What is the creature shown on the giant roulette wheel in the central area of Serendipity?
A. Carbuncle

Q. What is the defensive paradigm that’s useful when the party’s HP is low?
A. Solidarity

Q. The ATB gauge fills up during battle. What does ATB stand for?
A. Action Time Battle

Q. The Caldana root of the Steppe is an invaluable plant of which reason?
A. They contain salt that can be extracted

Q. Of all the chocobo race urban legends, which one is said to possibly be true?
A prisoner won the race and he and his group were pardoned

Q. What is the first line of the duet ‘Nautilus Yearning,’ a song about the city that never sleeps?
A. The neon lights shine brightly

Q. Of all the chocobo toys sold in Nautilus, there are rare ones called Happy Chocobos. What creepy characteristic makes it different from other toys?
A. Its eyes are bloodshot

Q. Of the many cactuar dolls, which is deemed the cutest by customers?
A. Cactuarina doll

Q. On Cocoon, what Bodhum event was know to grant everyone’s wishes?
A. Fireworks Festival

Q. On what body part does Lighting don her white feathers?
A. Hips

Q. What was the name of the mission to drive out the inhabitants of Bodhum when a Pulse fal’Cie was discovered?
A. The Purge

Q. What was the PSICOM weapon used in the battle at the Hanging Edge?
A. Manasvin Warmech

Q. What weapon did the Sanctum army bestow upon their skilled soldiers?
A. Blazefire Saber

Q. What weapons does Mog transform into for Serah’s use?
A. Bowsword

Q. When Cocoon residents relocated to Gran Pulse, what dish became widely popular as a way to diminish the natural smell of Pulse ingredients?
A. Curry

Q. Where are Eidolons said to be from?
A. Valhalla

Q. Which Academy team was ordered to investigate the disturbance in the Vile Peaks in 10 AF?
A. Blitz Squadron

Q. Which creature has large eyes?
A. Neochu

Q. Which creature has sharp claws?
A. Silver lobo

Q. Which creature has the longest legs?
A. Shaolong gui

Q. Which creature has white fangs?
A. Ahriman

Q. Which event was the most popular at Nautilus Park?
A. The hologram dance parade

Q. On what part of his body does Odin wear his cape?
A. Over his right shoulder

Q. Since the massive relocation to Gran Pulse, a world much less peaceful than Cocoon, which item has considerably risen in sales?
A. Potions

Q. Stage actor John Barker is a less-than-handsome man who is always late fir rehearsals. what flimsy excuse does he use as the reason for his tardiness?
A. An ochu was flirting with me

Q. The airline providing flights between Cocoon and Gran Pulse came up with a special offer that proved disastrous because of its name. What did they call?
A. Smile and say ‘Pirge’

Q. The annual Gysahl Cup that presents the winner with more gysahl greens than it can eat in a lifetime was held every year except for one. Why wasn’t it held in 394 AF?
A. Lack of gysahl greens

Q. The tonberry parent became a social phenomenon in 300 AF. What kind of parents doe sthe phrase refer to?
A. Those who wield knives when talking to teachers

Q. Two sisters work in Serendipity as casino staff. How does the younger sister describe her older sibling?
A. Shy

Q. What caffeine-filled snack was popular among the Academy scientists of 10 AF?
A. Bobblicious

Q. What liquid used in perfumes can be extracted from noctilucale and crawlers?
A. Fragrant oil

Q. Noel’s clothes are tailored to withstand a severe lifestyle. How is this done?
A. Multiple threads are embroidered through his clothes

Q. What does Vanille lovingly call her Eidolon, Hecatoncheir?
A. Hecaton

Q. Which is not an arthropod creature that appears from the Void Beyond?
A. Meonekton

Q. Which monster is not found on the slot machine reels in Serendipity?
A. Flan

Q. Which of the following is coarse?
A. Scalebeast’s back

Don’t hold back, add your favorite questions in the comments and we will update this Final Fantasy 13-2 Brain Blast Grand Avenue guide with them.