Where To Find Church Of Vows In Elden Ring

How to get to the Church of Vows in Elden Ring

In order to reach the Castle of Vows, players must first clear or bypass Stormveil Castle. They can then visit the region of Liurnia in the game, which is the second-largest region and where the Church of Vows lies.

The church lies on the eastern side of the region. Players should start by taking the Lake-facing cliff side of the site of grace as a starting point.

Head north and stay on the right side of the map. You’ll come across the Purified Ruins and Carian Study Hall on the way to church.

You will see the church from a distance, close to the west of the Artist’s Shack. Cross the bridge from Artist’s Shack and the Church of Vows will be there. 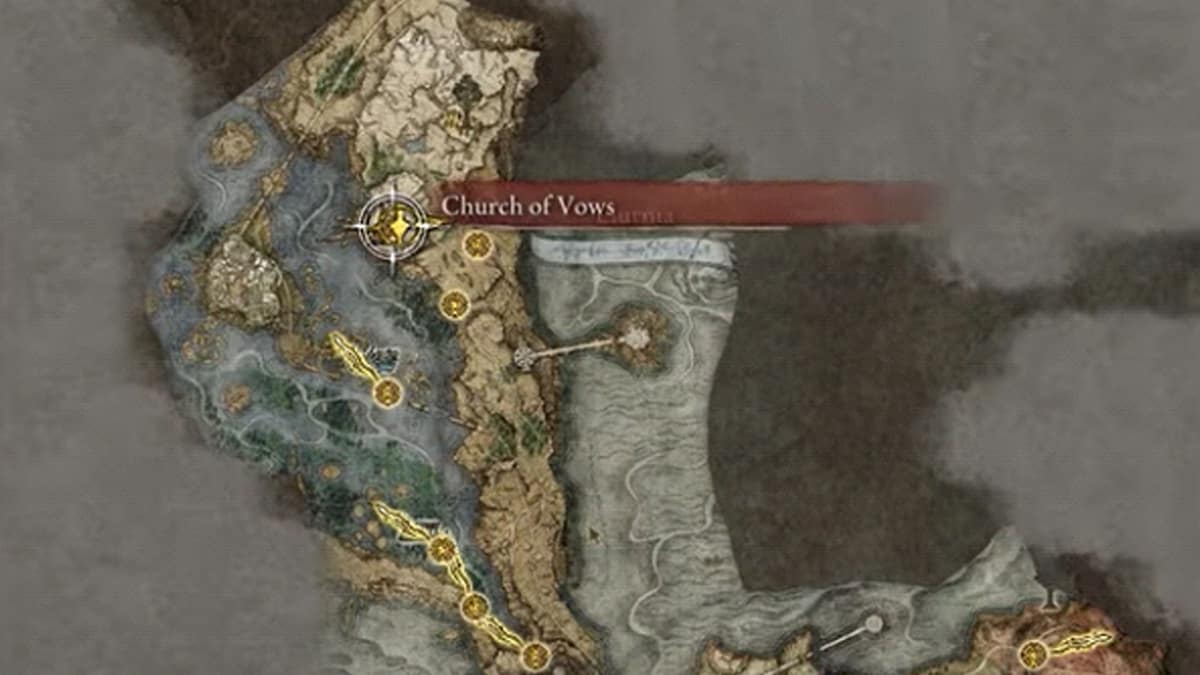 Where to find the Church of Vows portal

If you don’t want to walk all this way, there is also a portal in Raya Lucaria Academy that can take you to the Church of Vows. Head to the courtyard from Debate Parlor grace site.

In the church, a priest who is a giant turtle will greet you. His name is Miriel and he is the guardian of the church. He will share his knowledge of Sorceries, Incantations, and Lore related to Rennala, Queen of the full Moon, and Lord Radagon.

The priest will tell you about the church’s history; how the great houses of Erdtree and the moon were joined there at the church. And that’s why the church contains the monuments of both houses.

A vendor at one of the wells in the lake area will sell you an item that you can take to the turtle vendor at the Church of Vows. When shown the item, he will give you more details about it and also offer to sell you some spells.

Besides that, the turtle asks you if he can be of some help to you. He offers you that you can take anything of use from the church.

The players can also have absolution at the Church. At the center of the altar, a statue of Lady Rennala stands that the players can interact as an Atone and an option of absolution is prompted.

This allows you to continue any quests they might give you. However, to perform absolution at the church, you will need an item called the Celestial Dew.

Celestial dew is a consumable item in Elden Ring. It is also known as the Night Tear. However, unlike many other consumables, it cannot be used to buff or debuff any stats but can only be used to perform absolution in the Church of Vows.

It can be found in various locations around the map and can also be bought from the Nomadic Merchant in Ainsel River for 7500 Runes, or by Pidia at the Caria Minor. If you do not wish to purchase this item, you can also find them in the locations listed below:

Something that you need to keep in mind while performing absolution is that any isolated or traveling merchants cannot be revived along with Knight Bernahl. Only NPCs that play a role in some main questlines can be revived, along with only a few others.

The Bell Bearing Hunter is a boss at the Church of Vows in Elden Ring. A fight with this boss can be fairly challenging but it can be defeated without much difficulty if fought the right way. We recommend that you fight this boss at around level 55.

This boss can only be found at night time when the turtle disappears. So in order to find this boss, you can head to the church at night or if not, rest at a nearby sight of grace till it is night and then head for the church.

The Bell Bearing Hunter has an array of attacks at his disposal. He wields a large single-handed sword that he can levitate and strike you from a distance.

This boss also has another ability with which it can pick you up even if you are far away. You’ll spot this attack coming when the boss’ hand starts glowing red. You need to delay your roll in order to dodge this attack. Remember that most of Hunter’s attacks can be parried, except for this one.

Once you defeat this boss, it will drop a Meat Peddler’s Bell Bearing which can be used to unlock a collection of meat you can purchase. In order to do that, you need to offer the Bell to the Twin Maiden Husks at the Roundtable Hold.