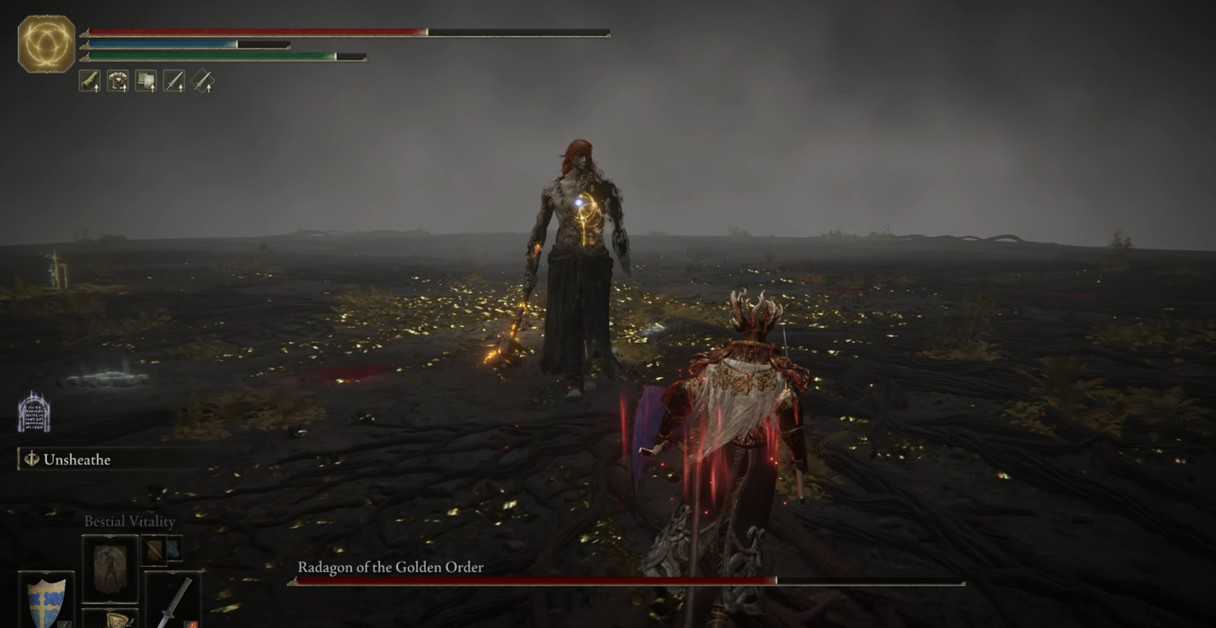 In Elden Ring, you will face many bosses as you play through the game’s main story. These bosses will get stronger and tougher to beat as the story progresses. This guide will explain everything about Radagon of the Golden Order and teach you How to defeat him in Elden Ring.

The exact location where Radagon of The Golden Order can be found is inside the Erdtree at Leyndell, Ashen Capital.

After defeating Godfrey/Hoarah Loux, Warrior, you will see a glowing wall in front of you. Entering that wall and you will be able to confront the final boss, Radagon of The Golden Order.

Radagon of The Golden Order Recommended Level and Weaknesses

You are recommended to have reached at least level 125-130 before going after Radagon. There will be a lot of holy power-charged attacks, so it is advised to use holy talismans and holy armors to negate the damage.

Try to stick to the boss as close as possible. It will help you launch some free hits in-between his attacks.

Incantations such as Black Flame or Dragonice will prove very handy as they will exploit his weakness to fire and frost. So don’t forget to bring those along.

Lastly, Radagon is weak against Strike and Fire-based attacks. You can use that to your advantage by bringing the appropriate weapons and spells. For instance, you can use Ash of War Black Flame Tornado or Ash of War Eruption.

Radagon of The Golden Order Attacks and Counters

Radagon has many lethal attacks but avoiding them is fortunately not too difficult. All of Radagon’s attacks are listed below along with how you can counter them.

Radagon has a hammer so he may hit you consecutively from either side. This may follow up with a slam. You’ll know when the attack is coming because of the long animation/winding time Radagon will take. So you can easily roll out of the way.

For another attack, Radagon charges his legs with holy powers for a ground slam within a small radius. You will have enough time to roll back. Make your move when you see him raising his leg.

Occasionally, Radagon flies up in the air to charge his hammer before diving back down at you. Rush towards Radagon as he is about to dive at you. This will help you avoid the AoE wave of the attack.

Radagon throws five lightning bolts at you using his left arm. These bolts stick into the ground and then explode. Simply keep your distance from each bolt.

Radagon has the ability to teleport himself. When he reappears, he makes a minor AoE explosion. Locking on will allow you to predict the area where he will reappear.

When Radagon charges towards you with his hammer, there isn’t much to do besides time your dodge to avoid his attack.

Radagon jumps into the area. He raises his hammer high until it glows and then strikes it on the ground to create a field that drains health. Roll or sprint away from the area of the attack.

Can you Parry Radagon’s Attacks?

Some of Radagon’s attacks may be parried. Whenever you see him getting ready for a regular melee attack, you can start preparing to parry him. Keep in mind only the non charged melee attacks can be parried and none of his special moves.

How to Defeat Radagon of The Golden Order in Elden Ring

Ragadon has multiple attacks up his sleeves. He will charge at you in one of his attacks and then swing his axe at you several times. Make sure to move out of the direction of the swing to avoid taking damage.

In another attack, he will smash the floor with his axe, and the nearby area will damage you if you stand there. Make sure to move out of the affected area to avoid taking a hit.

Once he starts losing health, he will use a barrage attack in which he will repeatedly smash the floor multiple times. Make sure to stay mobile and move out of the affected areas, otherwise, you will get caught and take loads of damage.

Once all his health depletes, a cutscene will play, after which The Elden Beast will appear.

How to Cheese Radagon of The Golden Order

There is a very succulent way to cheese Radagon that everyone must try. The moment you enter the glowing wall after defeating Hoarah Loux, you will trigger a cutscene that will take you to the arena where you can face Radagon.

When you rush directly towards Radagon, it will surprisingly freeze him. He won’t attack. Rather he will keep standing right next to you doing nothing.

You can use the most accessible weapon to take him. Start hitting him with your bow and arrow. You can use some poison incantations to speed up the health loss process.

Whatever you do, Radagon won’t react. It may take 90-100 arrow hits to completely defeat him.

Radagon of The Golden Order Lore

Radagon of the Golden Order is a god-level boss and the second Elden Lord. Radagon is the male half of Queen Marika, thus creating the ultimate alchemical being Rebis.

Before marrying Queen Marika and fathering Miquella and Malenia, Radagon was married to Rennala and had three children; Radahn, Ranni and Rykard.

He is a fractured god who uses a hammer as his weapon. This is the same hammer that was used to shatter the Elden Ring but it was actually Marika who did the deed but since both shared the same body, they were sentenced together. Both Marika and Radagon were fused together and shackled beneath the Erdtree.