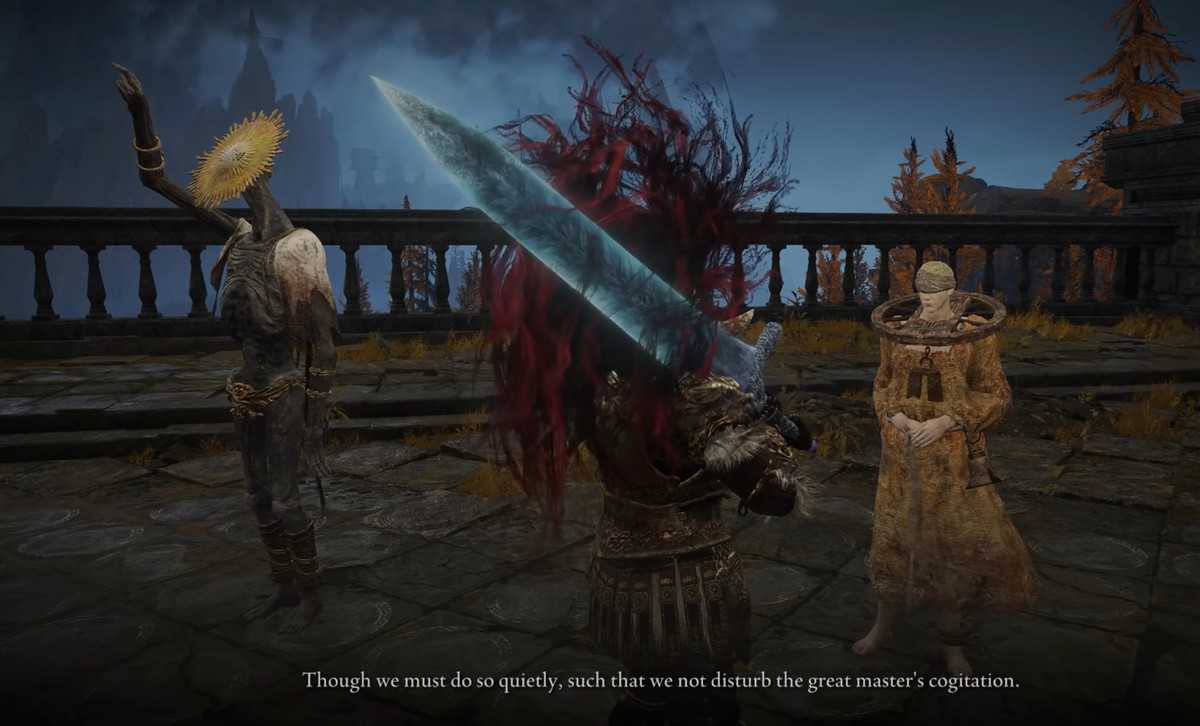 Brother Corhyn is a holy practitioner in Elden Ring who will teach you faith-based incantations at the cost of runes. He also has an important questline that involves Goldmask, another NPC, and the one who gives you one of the Mending Runes to alter your ending.

Both Brother Corhyn and Goldmask tend to move around a lot in the game. They will change their locations depending on where you are while advancing the Brother Corhyn quest.

The following guide will help you complete the quest line by marking all of their locations, and explaining how to complete certain objectives like solving the riddle for Goldmask in Elden Ring.

Before you can start the quest, you will need to progress through the story until you reach the Academy of Raya Lucaria. Then, after you have defeated Rennala, the Queen of the Full Moon, you can start the Brother Corhyn and Goldmask quest line.

Make your way to Roundtable Hold to speak with Brother Corhyn in the main room. Once his dialogues are over, continue with your progression until you reach Altus Plateau. This is where he will head out to find Goldmask. This is also where he will get new incantations to teach you.

Note that Brother Corhyn will relocate from Roundtable Hold to Altus Plateau. If you to find him the second time, you will need to take the road north of the Altus Highway Junction Site of Grace to find him standing next to the pillar monument. The location has been marked on the map below.

Now head further north till you reach a teleporter at the end of the way. Go through the teleporter, and it will take you to a large broken bridge located to the north of Altus Plateau. You will find Goldmask standing on the north side of the Forest-Spanning Great Bridge. Speak with him.

Get back to Brother Corhyn on Atlus Highway Junction and tell him about Goldmask. Finish his dialogues and then return to Goldmask’s location on the Great Bridge with Brother Corhyn.

Reload the area by resting at the Site of Grace and Brother Corhyn will be standing next to Goldmask. This is where Corhyn will add new incantations to his shop for you to check out.

Speak with both of them to advance the quest line.

Go to the Erdtree Sanctuary

Both Corhyn and Goldmask will also relocate to the Royal Capital. You will be able to find them trying to solve a riddle on a cliff west of the Colosseum.

However, before that, you will need to go all the way to the Erdtree Santucary and collect the Golden Order Principia from a body on a throne hanging from the roof.

You can use the branch of a tree going through the Sanctuary to get to the same level as the throne and collect the Golden Order Principia.

Go to the east side of the Colosseum

After that, from the West Rampart, you will need to move towards the east side of the Colosseum.

There you will find them both standing on the edge of the mountain in the Leyndell, Royal Capital region. Talk to them and give Brother Corhyn the Golden Order Principia.

He will thank you and tell you about the riddle he is trying to solve. You will have to solve this riddle for Goldmask to proceed to the next step of the quest.

Something important to note here is that if you burn down the Erdtree at Forge of the Giants after defeating the Fire Giant boss without first solving the riddle, Corhyn and Goldmask will disappear. Hence, you need to solve the riddle before burning down the Erdtree.

The riddle can be solved by casting the Law of Regression incantation at a specific spot. Make your way west of the Erdtree Sanctuary Site of Grace. Go down the elevator and then the stairs. You will find a white message on the ground in front of a statue.

You need to stand on the white message, face the statue, and cast the Law of Regression incantation. Then read the letter to advance the quest line.

Go to Brother Corhyn and Goldmask again at the same location you met them last time (on the cliff) and tell them about the letter.

Make sure you talk to both of them every time. This time you will also get the Immutable Shield incantation from them.

Go to the bridge south of Stargazers Ruins

After that, you will need to go to the bridge south of Stargazers Ruins, which can be seen on the map above as well.

When you reach there, you will find both Goldmask and Brother Corhyn in the Mountaintops of the Giants located near the ruins. Talk to both of them again, and once Brother Corhyn’s dialogues end, you can move towards the next step of the quest line.

After this meeting, you will need to get back to the main story and progress forward till you unlock Leyndell, Capital of Ashen.

Once Leyndell, Capital of Ash is unlocked, you will need to head towards the Colosseum, and on the lower west side, you will find Goldmask’s corpse by the mountain.

Collect the Mending Rune of Perfect Order from Goldmask’s corpse. This will complete the quest line of Brother Corhyn and Goldmask in Elden Ring.

Go to the Fractured Marika

After that, progress to the game’s end and go to the statue of Fractured Marika and use the Mending Rune of Perfect Order. This will unlock the Age of Order ending. This is how you get the Goldmask ending in Elden Ring.