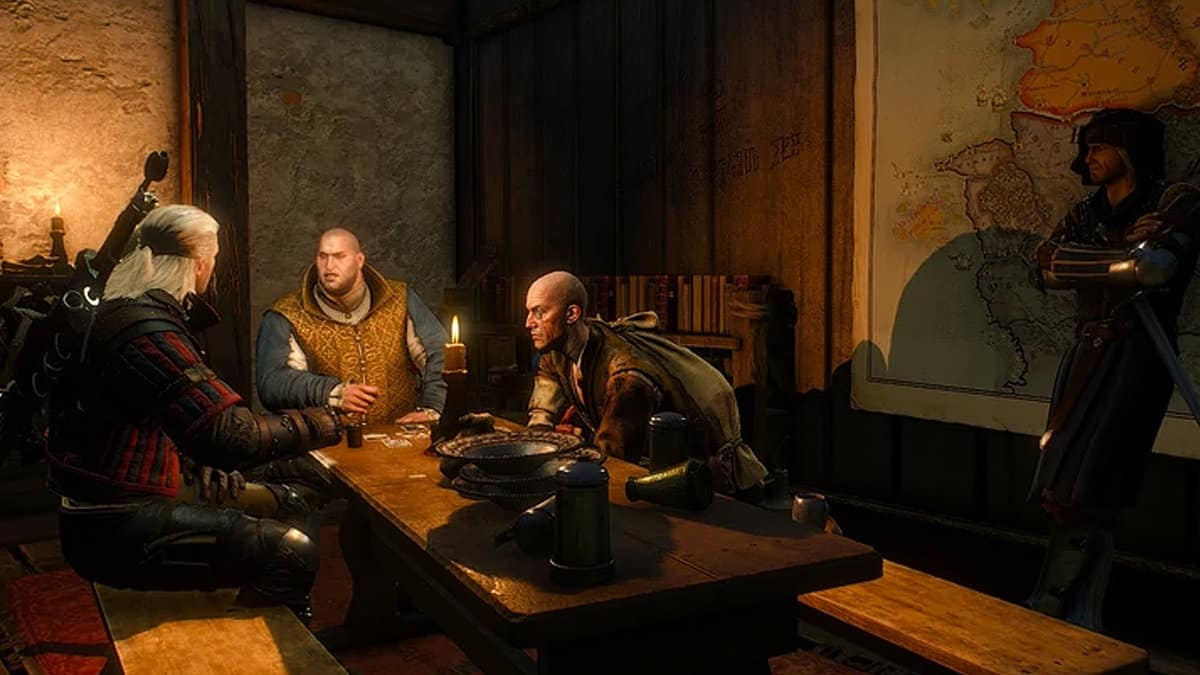 Reason of State is one of the most important secondary quests in The Witcher 3: Wild Hunt because the decisions you make here are going to impact the kind of ending you unlock.

The quest involves killing Redania’s King Radovid, a cruel ruler that torments his people. It takes place in the southwestern part of Novigrad, and you will be accompanied by Dijkstra, Thaler, and Roche to try and deal with the king on a permanent basis.

We have come up with a walkthrough for this quest, informing you of all the stages and events of this quest, along with the best choices that lead to a favorable ending.

The quest will begin once you complete Blindingly Obvious. You have to then head to the Novigrad docks to meet Dijkstra, Thaler, and Roche in a seemingly abandoned warehouse.

Something important to note here is that you must bribe Dijkstra to get information about Emhyr during the Blindingly Obvious quest. Do not use force.

This will be during the third act of the game, and a lot will have happened by now. You need to complete several prerequisites before starting Reason of State as the quest concludes several branching storylines in the game.

You can begin the Reason of State quest once all of these prerequisites are down, but make sure to do the quest before starting On Thin Ice where Geralt takes down Caranthir and Eredin. Otherwise, you will fail Reason of State.

Once you walk inside the warehouse, starting this quest, you will meet with your allies who discuss ways to put an end to King Radovid’s rule on Redania.

Dijkstra formulates a plan that involves luring out Radovid, baiting him with the location of Philippa Eilhart. It is decided that Geralt will be the one to lure the mad king out.

At this point, you have a choice to make. You can either choose to lure out Radovid and kill him, or you can deny them.

The best choice to make at this point is to go ahead with Radovid’s assassination and put an end to his rule.

Denying the plan will fail the quest and will lead to Radovid keeping his rule of Redania and winning the war. Not a good time for the rest of the North if he survives, but there is a chance for a better future if he is taken out of the picture.

Once Geralt exits the warehouse, Philipa comes by and informs Geralt that their plan will not work so easily. She then gives Geralt Vizimir II’s (Radovid’s father) ring to make it more believable.

The next step after obtaining the ring is to meet with Radovid, whose ship is conveniently docked just outside the warehouse.

Once you board Radovid’s ship, you must speak to the men on the boat and demand an audience with the King. After some discussion with Radovid, he agrees to follow Geralt to Philipa’s location.

There will be a series of dialogues to choose from in the conversation with Radovid, but the choices aren’t that important because they will always lead to the same conclusion.

Arriving at the chosen location, Radovid orders his men to close the bridge leading to the Temple Isle, blocking the way out. He then goes ahead and orders Geralt’s death. However, just as Geralt is about to get killed, Roche jumps in and saves him.

The ambush will start now, and a fight will break out. You will only be given a basic sword at the start, but kill a few more enemies and you will get your own equipment back.

The fight against Radovid’s men will be fairly easy because you will have your allies’ help. Sometime later, Radovid will try to flee, and Geralt and Roche chase him. You will encounter a few enemies during the pursuit. Do note that there is a bug here that doesn’t let you interact with Radovid if you use the Axii sign during these fights.

In the end, he is blocked by a few locked doors and is cornered. One of the doors opens a bit later, revealing Philipa to be there. She then kills Radovid in an instant. The king is now dead and the merriment can begin.

Decide the fate of Thaler, Roche, and Ves

With Radovid now dead, the group heads over to the theatre for a celebration. However, things take a turn over there.

Dijkstra comes forward with his own plan where he will become Chancellor of Redania now that Radovid is out of the way. He will wage the war against Nilfgaard and reunite the Northern Realms.

Dijkstra knows that Thaler and Roche wouldn’t let him do this, so planned accordingly and brought seven of his men to surround them and kill them. Geralt is now faced with a choice – a choice that will determine who becomes the ruler at the end of the game.

You can either choose to walk away and let Dijkstra handle Thaler, Ves, and Roche. If you choose this option, Dijkstra will become the next ruler of Redania. Note that his rule will be no different than Radovid in terms of living quality for the people, but the industries of the Continent will bloom.

You can also choose to kill Dijkstra and put an end to his plans. This one is the best choice to make. If choose this option, you will have to fight seven of Dijkstra’s men and kill him in the end. This will allow Emhyr to take the throne and rule over the Continent. Although he isn’t exactly a good ruler either but he is far better than Radovid and Dijkstra combined.

The latter choice works best with the ending where Ciri becomes Empress of Nilfgaard, but can work with the Witcheress ending as well. Choosing either of the two options will conclude the “Reason of State” side quest.