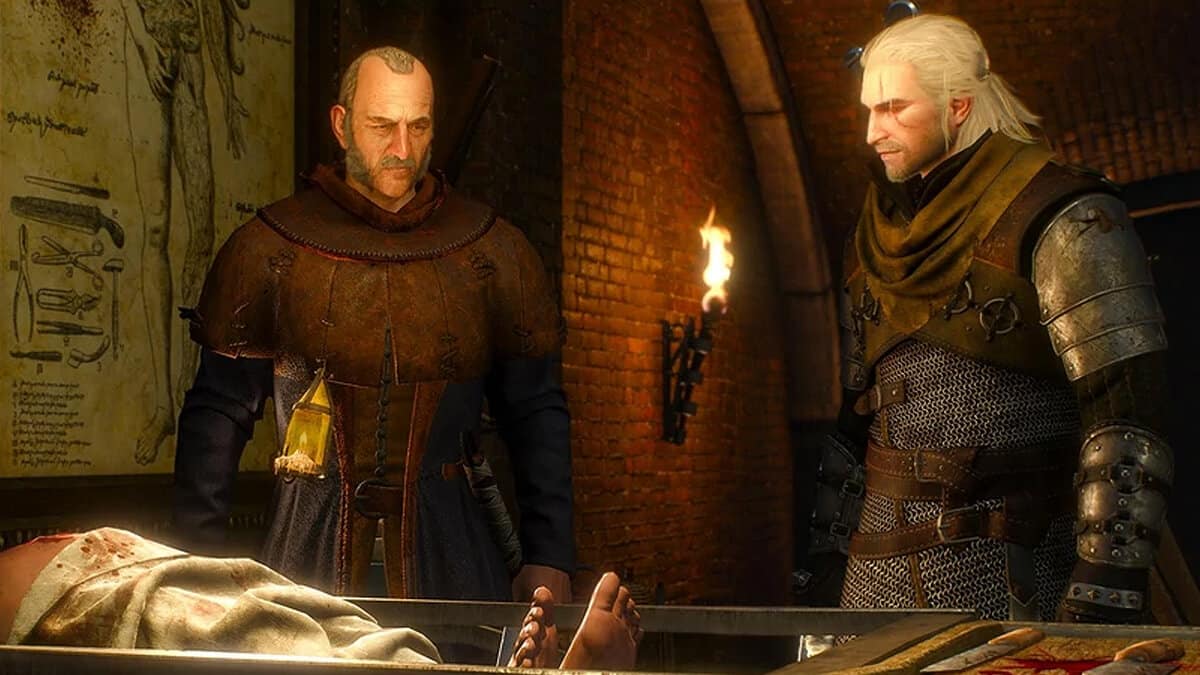 Carnal Sins is a secondary quest that you can complete for your friend Dandelion in The Witcher 3: Wild Hunt. His close friend Priscilla, the “romantic poet” with a beautiful singing voice, has been attacked.

You will soon discover that Priscilla’s attack is only the latest in a series of similar attacks. All of the previous victims have died. Priscilla was lucky in this regard.

The following guide will tell you how to complete the Carnal Sins quest and discover the true identity of the killer in The Witcher 3: Wild Hunt.

Carnal Sins will begin automatically after you complete the Cabaret quest. Head to the Rosemary and Thyme brothel in the Glory Lane district of Novigrad to speak with Dandelion. You will get to know that Priscilla has been attacked.

You both will then make your way to the Vilmerius Hospital in the northeastern part of The Bits to start with the quest.

Something important to note is that the quest will fail if you start The Isle of Mists before completing Carnal Sins. Hence, make sure to complete it beforehand.

Priscilla will be in terrible condition when you arrive at the hospital. Thankfully, Joachim, the head doctor, will confirm that she should make a full recovery.

The doctor will then point out that there have been other people who have been victims of such kinds of attacks. Joachim will ask Geralt to accompany him to investigate the dead body of the last victim. Both will go toward the morgue, via the sewers, to find any hidden clues that point toward the murderer.

Clear the way to the Morgue

You need to follow the doctor through the sewers, fighting off a Water Hag and some Drowners. As he leads you to the morgue, you must look for the corpse of a dwarf who was killed in a similar manner.

You need to climb the ladder and move to the room nearest to the ladder. A cut scene will take place as you find the corpse. You will examine the corpse to find clues about the murderer but the coroner, Hubert Rejk, will interrupt your investigation. The doctor and the coroner have a bad history between them, and you must listen to their dialogues carefully.

As the conversation concludes, the reverend Nathaniel Pastodi will arrive and asks you to leave. Hubert assures you that he will provide you with all the information.

As you move out of the morgue, Joachim explains how the reverend used to be a torturer before obtaining his current status. He will then leave you to look after Priscilla while you go on to search for more clues.

You need to visit three places for more evidence, and you can start in any order. However, after you visit the first two locations, a guard will appear to inform you about a new murder. But you can carry on to the third place and find concrete evidence against the killer.

You will encounter a few peasants and a lady named Whistling Wendy. The door from where you entered will close and three peasants will come at you. You need to put them down and talk to Wendy.

Searching for clues will complete your objectives for the site. You will also pick up the scent of Formaldehyde, a chemical used in embalming bodies that will lead you to the Concerned Citizen’s sermon on the wall. You will also find out that the killer jumped over a wall that you cannot jump over.

However, you can leave the site and move to Woodcarver’s house to investigate further. There’s an option of talking more to Wendy and letting her know about what happened to Priscilla.

You will be attended by the woodcarver’s brother, Gus Myer, after reaching the site. Search the area for the clues and you will find another Concerned Citizen’s sermon. Reading it will point clues to the Church of the Eternal Fire. After getting all the clues, go out toward the woodcarver’s workshop. You can ask Gus to let you in or go there.

Find all the clues inside the place, and you can speak to Gus if you want. A new conversation option will pop up as you complete investigating all the areas for the clues. There is a particular clue related to blood stains present in this place. You must gather all and move to speak with Eustace.

You need to bribe or use Axii on this corpse collector to get information. Pay him 200 crowns or use Axii that has been upgraded with the level 2 Delusion ability to make him take.

Eustace will tell you that he found a note on the dwarf’s body. On the note, the name of the next victim was mentioned and it was Priscilla.

He will make a comment about Priscilla and you can either punch him or leave. Out of the two, punching is more satisfying.

Return to the coroner

You can return to ask some questions from the coroner. There are some suspicions raised against him, so asking the questions will help you in the process.

There will be a note found by Hubert that indicates the next victim. The next victim will be Patricia Vegelbud, make your way to Vegelbud’s residence.

You will be greeted by the daughter of Patricia, Ingrid. You need to talk to her about her mother and she will take you to her room. You will find Particia murdered in the room and the killer will be running.

You must chase the killer while ignoring the wild dogs. The guards will take you for the killer and start a fight with you. Making it easy for the killer to run away. Fight the guards and as one of them is almost dead, a cut scene will start.

The guards will take you inside the house and Ingrid will help you. You can investigate Patricia’s body, finding the name of the final victim, Sweet Nettie found in the Crippled Kate’s brothel.

Make your way toward the Sweet Nettie room located on the top floor of the brothel. Sweet Nettie will be tied up in her room by Reverend Nathaniel. You will enter at the right time to stop Reverend from torturing Sweet Nettie.

You can move swiftly to kill him or listen to him. The most important thing here is that if you kill Reverend without listening to him then you can never find out the real killer.

At the conclusion of your conversation with Reverend, you will understand that all these killings are the doing of Hubert, the coroner. Now it is up to you to help Nettie or not, as you can kill Nathaniel or make him leave.

The best thing about killing him is getting a unique poker item as a reward. Additionally, you will get 100 XP along with Tracker’s Trousers and Ard Skellige Aketon’s diagram.

Now you need to go toward the warehouse to fight Hubert.

Hubert will be waiting for you inside the warehouse located by the docks. Confronting him will finally force him to reveal his true form. Hubert is actually a Katakan vampire. Take him down.

Get back to the hospital and the doctor will tell you that Priscilla is recovering and her voice will be restored with time. Dandelion will give you his regards and explains how in the future he will play the voice while Priscilla plays the lute to entertain others. Once Priscilla heals, she will be the vocalist again.

With this, the Carnal Sins quest will come to an end in the Witcher 3.