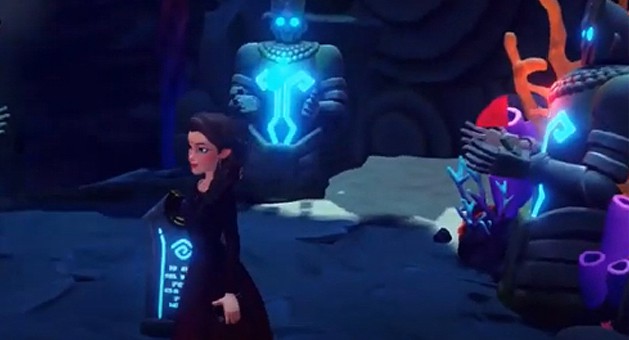 With Great Power is one of the longest questlines in Disney Dreamlight Valley. It mainly revolves around solving several puzzles in the Mystical Cave and locating the Pillar of Power on Dazzle Beach.

The following guide will provide a complete walkthrough of the With Great Power quest in Disney Dreamlight Valley, including the solutions to all puzzles involved.

You need to have 5,000 Dreamlight to unlock Dazzle Beach as a new biome to explore. Once you have done so, enter the new area from the entrance near the Forest of Valor.

Where to find the Cursed Cave?

Speak with Merlin as soon as you enter Dazzle Beach to start the quest. He will be marked on your map.

Now follow the coastal line all the way to the northeastern edge to find the Cursed Cave. Its entrance will be shrouded in a strange purple fog.

You will find Ursula inside. Speak with her to get the Crystal Key. There is also a chest to the right that you can open for a new outfit.

Where to find the Mystical Cave?

You now need to use the Crystal Key to open the Mystical Cave. Exit the Cursed Cave and make your way to the western grove. The location is almost in the middle of the Dazzle Beach biome.

You will find the Mystical Cave device underneath a banana tree, across a large door in the cliffs. Place the Crystal Key on the device to open the stone door. You can now finally enter the Mystical Cave.

How to solve the gem puzzle?

The first puzzle inside the Mystical Cave will require you to place a colored gem for each of the three statues.

Placing all three gems will open the first magical door of the Mystical Cave.

How to solve the crops puzzle?

The second puzzle in the Mystical Cave requires you to plant three crops for three statues.

How to solve the cooking puzzle?

The third puzzle is relatively simple. You just need to harvest the Carrot, Wheat, and Tomato that were planted in the second puzzle to cook a Veggie Pasta dish.

There is a stove and pot inside the same Cave area that you can use to prepare the dish. Now, eat the meal to open the third magical door.

Where to find the Pillar of Power?

Your next task in the lengthy questline will be to fish the Orb of Power from the water. Use your fishing rod to cast a line into the golden ripple to get the Orb of Power.

Exit the Mystical Cave to reach its main entrance and place the Orb of Power into the Pillar of Power.

Now, return to the Cursed Cave to speak with Ursula. Then speak with Merlin to finally finish the With Great Power questline.

Once you complete the With Great Power Quest, you will be rewarded 1,000 Dreamlight as a reward.