The Witcher 3 Wandering In The Dark Walkthrough 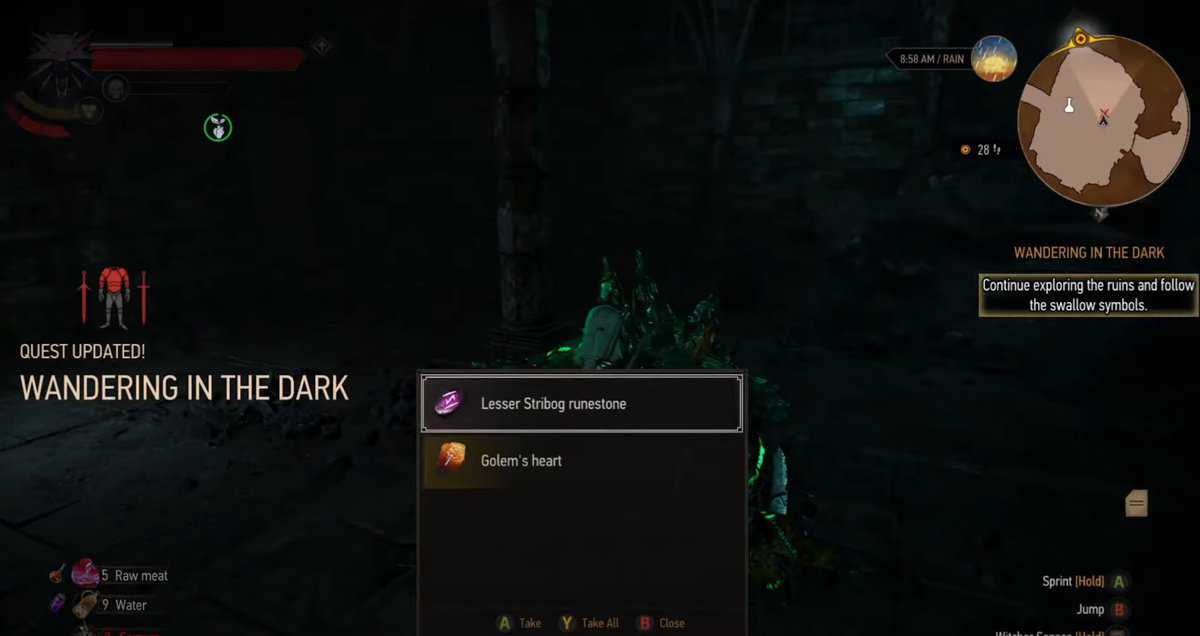 Wandering in the Dark is a main story quest in The Witcher 3 in which Geralt and Keira will work together to find clues about Ciri. This quest allows you to meet Keira Metz in Velen. She will ask you to help her by exploring the northwest of the Elven ruins of the village of byways.

The Witcher 3 Wandering in the Dark

Once the Wandering in the Dark quest has been started, you will follow Keira to the cave entrance. Before starting the quest, you must prepare yourself for the ruins by stocking up on potions and food for healing.

Equip the best gear you have inside your inventory. Once that has been done, talk to Keira again to start the quest.

The Diversity of the Witcher 3 allows you to make your own decision. Keira will open up a portal for you and herself; you can either travel with her or stay still and then enter the cave. Either way, you will have to find Keira using your witcher senses. She will show up as a red marker.

Whatever your choice may be, you will end up in a large cave with a couple of Drowners and a weird yellow mist. You can use the Igni sign to clear out the mist but do not stand close to it, or you will also take damage.

Once you find Keira, she will have a shield from the rats assaulting her. Destroy the nests on each side of the cave marked on your minimap with an igni sign to progress to the next phase.

Once the rats are defeated and you have met up with Keira, you will again follow down the path marked on your minimap. You will eventually end up in a large cave room with the yellow mist. This time you will be welcomed by Wraiths. Craft and use Specter Oil to easily deal with those wraiths and igni sign to deal with mist.

Follow down the path again. Along the way, you will notice a swallow symbol painted on the wall west side of the cave. Follow that tunnel to reach your goal.

Use your Witcher Senses to search the chamber

You will end up in a chamber with the elf’s hologram. Listen to the hologram as it will explain to you what to do.

The elf related it to Ciri’s Kelpie, which you must examine. Simply put, you will have to examine all the horse symbols in that chamber. If you examine any other symbol, they will explode.

Once you have interacted with the two symbols you found, dive into the water and follow the tunnel for the third and the last symbol. Examine the final symbol and then return to Keira.

Once you meet Keira, a new pathway will open up. Follow it, and you will find yet another swallow symbol in the end. Examine the symbol that will open up a portal. Enter the portal and continue moving forward.

While moving forward, you will eventually end up fighting a Golem Guardian. If you have a Thunderbolt potion, drink it to boost your attacks.

The Golem is a hard-hitting but slow mini-boss. You have to defeat the golem in order to progress through Wandering in the Dark. Dodge its attacks and land two hits. You can use Aard sign to stun it momentarily. Once you have defeated it, loot it and keep following the path.

In the end, you will fight a Gargoyle. Compared to the golem, the gargoyle is pretty agile, and you will have Keira’s help this time. Wait for her to distract the gargoyle and then land a couple of hits to take it out easily.

Once the gargoyle is defeated, loot it and follow the path.

Examine the symbol again to open up a portal; stepping out of the portal, you will notice that you aren’t the only one exploring the cave looking for Ciri and her whereabouts. Hounds of the wild hunt and white frost from the rifts will assault you.

Stay close to Keira and protect her from the hounds, as she will protect you from the white frost and close up the rifts.

Once you reach an open room, you will encounter one of the Wild Hunt warriors, Nithral. To defeat Nithral, you should drink a thunderbolt potion, if you have any, and use Yrden Sign. You will dodge his attacks until Keira Distracts him. Once distracted, make some backstabbing attacks to deal immense damage.

Once you have dropped his first health bar, he will kneel and create a protective dome around him. Do not attack him at that phase since the dome will reflect all the damage you give right back at you. Instead, take down the Hounds that will spawn while he’s in that phase.

You will have to repeat the same process twice to defeat him. Once defeated, collect the loot. And head to the east end of the room.

Listen to the elf’s message that you find via your witcher senses. Loot everything in the surrounding area and talk to Keira again. Keira will then give you the Eye of Nehaleni to dispel the illusion that will be your way out of the cave.

She will let you keep the artifact since you have more uses than her. This will mark the end of the quest. You can either stay to help her with the ‘Magic Lamp’ quest or leave.