How To Kill Golyat In The Witcher 3 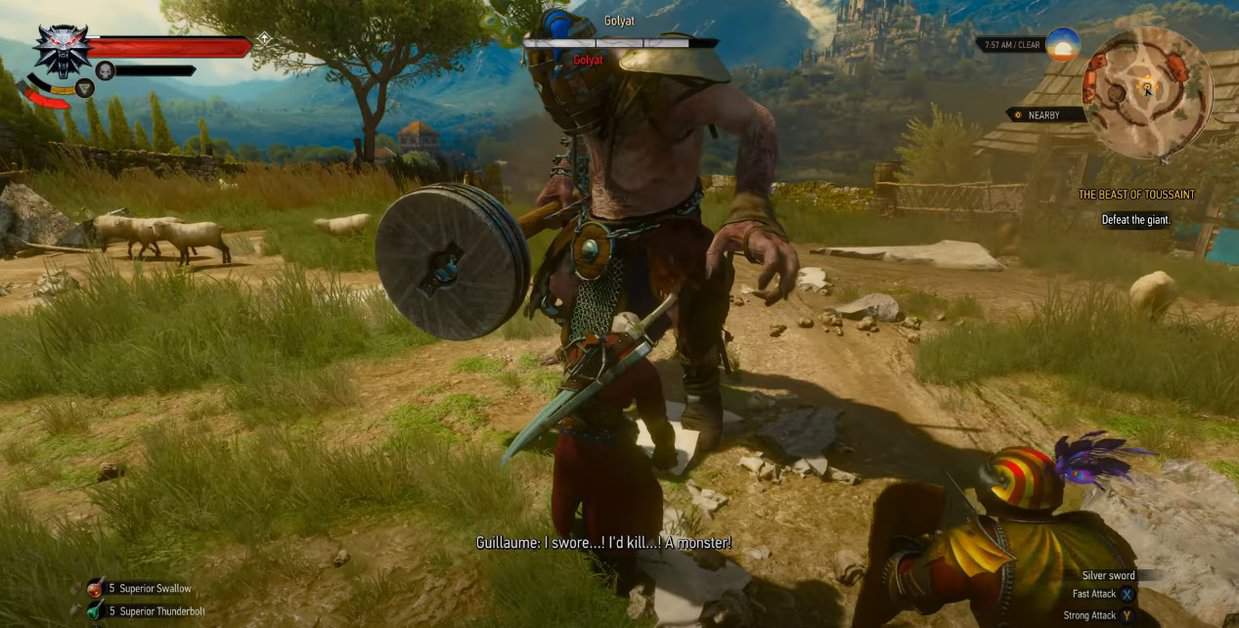 In Witcher 3, Golyat from the Ogroid class is one of the most fierce and robust gigantic enemies players have to counter. Picking up a horse with a single hand and throwing it is one of his abilities that shows how strong it is.

The fight with Golyat is the first significant battle players engage in during Blood and Wine DLC. Players can come across various formidable foes throughout The Witcher 3: Wild Hunt Blood and Wine expansion. However, only a few of them can be considered the game’s equivalent bosses, and Golyat is one of them.

This guide will cover everything players need to know about the Golyat boss in The Witcher. This includes the section of the game where you fight Golyat so you are prepared beforehand and can defeat Golyat with ease.

Players will get to fight Golyat during one of the main quests of Blood and Wine The Beast of Toussaint.

To reach Toussaint, players first need to complete the intro quest of Blood and Wine titled Envoys Wineboys. Once completed, players can then enter Toussaint for the major quest.

Golyat is pretty much the first encounter Geralt will have in the DLC. As soon as you reach Toussaint with Palmerin de Launfal and Milton de Peyrac, Golyat bursts out of a nearby windmill and starts attacking and it is up to Geralt to defeat him.

How to defeat Golyat in The Witcher 3

Golyat, a gigantic monster in the game, has so many powerful abilities that can create difficulty for the players fighting against him. He has a whirlwind attack which damages everyone standing nearby.

If you are standing behind Golyat, it will execute a sweeping attack that will knock you back. In addition, it also launches a pounding attack, creating a shockwave, and can easily stun or knock you back.

Once the battle has started, players need to be quick if they want to defeat Golyat in The Witcher 3. The trick against Golyat boss is that although it is gigantic and extremely powerful, all of its attacks take some time to charge up.

Thus, this gives players some extra time to attack the monster. Therefore players need to be as quick as possible.

The first way to defeat Golyat is to aim the crossbow and shoot in the middle of his head. But this is the difficult one and really frustrating. Thus only opt for this method if you have a very good aim. You can use Yrden to slow Golyat down, and get a few hits with your sword before retreating.

Speaking of attacking with the sword, since Golyat is an ogroid, make sure to cover your silver sword with Ogroid oil (Read: oil recipes) to enhance your damage.

While affected by Yrden, you should be able to easily able to aim at Golyat’s eye between the barrel on his head. If you manage to him Golyat in his eye, he will die instantly. This also earns you the David and Golyat achievement. If you have the Lightning Reflexes skill unlocked, you can slow down time by 45% while aiming, making it easier to hit the eye.

Similar to Yrden, Quen is also a very useful Sign in the fight against Golyat. If you are equipped with Light Armor, you should be able to spam Quen, close in the gap and get a few extra hits. Using Quen will allow you to tank a hit or two from Golyat. This way you can attack a few more times before being forced to retreat.