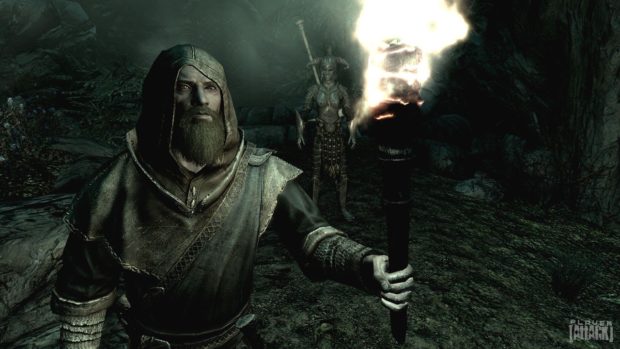 There won’t be any Skyrim without Magic. Magic is the breath of Dragons, it is shared by spells, potions, and enchanted items. If that isn’t enough to stress the significance of magic in Elder Scrolls V Skyrim, then consider the racial abilities. Skyrim Magic Spells form the core of your gameplay and this guide will dive deep into everything magic in the game.

Even Warriors can use Magic when they learn Dragon Shouts from the Word Wall. That’s why Magic is one of three skill types in Skyrim. There are five schools of Magic in Skyrim and they are – Alteration, Conjuration, Destruction, Illusion, and Restoration.

Every spell that you can learn belongs to one of these schools. Each magic school in Skyrim dictates certain magical effects, which determines the type of spells that you can learn from that school. For example, healing spells are part of Restoration School Magic because they restore health.

Mage magic character build is one of the most powerful but tricky characters to play within Skyrim. There are a handful of abilities and perks provided by Skyrim mage build. It has its own strengths and weaknesses. The following information will help you set up your mage build.

One thing you must first understand is that there are a total of 5 schools of magic; we’ll list each one and what the pros and cons of each one are:

Restoration: The final school of magic can restore health and stamina, and is especially useful for one-handed warriors as they can continue fighting while healing themselves.

How To Use Magic Spell

If you want to use a magic spell, first you will have to assign it to either your left hand or right hand. If you want your spell to be stronger, assign the same spell to both hands. When you cast a spell, it depletes your Magicka.

You can also use spells to create magic traps or ruins. Which are essential traps placed on the ground using certain spells, which will activate when an enemy walks over them.

Leveling Up Your Spells

If you are worried about consuming Magicka, level up the right perks and reduce the cost of casting these spells. You can even reduce the difficulty level required to use these spells, when you level up certain perks.

You can read our Leveling Guide for in-depth tips on how you can level up particular skill faster and more effectively.

How To Learn Spells

You can learn the spells by either buying them from the Merchants or by reading the Spell Books. Following are the NPCs that sell Spells:

Colette Marence
She teaches the Restoration spell. She sells restoration spells and gear (robes and hoods of restoration, spell books and soul gems). She can either be located in the Arcaneum Library or in the Hall of Countenance. You must be at Level 90 and need to have completed the ‘Good Intentions’ Quest before going to her to learn this magic.

Drevis Neloren
Drevis specializes on illusion magic. He will sell you illusion spells and gear (robes and hoods of illusion, spell books and soul gems). He can either be located in the Arcaneum Library or the Hall of Countenance.

Tolfdir
This man will teach you everything you need to know about Alteration magic. He will sell you alternation spells and gear (robes and hoods of alteration, spell books and soul gems). He can be found solely in the Hall of Attainment.

Farengar Secret-Fire
He is the court mage of Jarl Bagruuf The Greater. He advises Jarl when Whiterun faces a magic-based threat. He is doing research into dragons and will ask you to retrieve a Dragon Tablet – found in Bleak Falls Barrow. He can be found outside of the College of Winterhold.

Phinis Gestor
He is a Breton Conjurer from the College of Winterhold. He specializes in Conjuration school of Magic and sells many high-level Conjuration spells.

Wuunferth the Unliving
He is the court wizard of Windhelm, in service of Ulfric Stormcloak. He is a common trainer in Destruction and, like all court wizards, sells spell books.

Faralda
She is a Mage from the College of Winterhold. She specializes in Destruction school of magic and offers destruction training. She has a very high-level destruction spells available, which you can buy for a price.

You will find these magical effects in different spells, potions, or enchanted items. Some may have limitation to their use, like few racial powers that can only be used once a day.

For detailed overview of the Magic Spells, read our Spell Books Guide.

The Fastest Way to Level Up Mage Skills

Unlock all of the Perks for ‘Enchanter’, ‘Corpus Enchanter’, and ‘Insightful Enchanter’ and enchant yourself a set of armor or clothing – head, hands, chest and feet – which has the enchantment of 25% reduction in magicka cost for the skill you have in mind. With all four pieces combined, you’ll be able to cast spells for free in that school, meaning you can infinitely cast them for power-levelling.

There aren’t easy to find but reward is great. Spirits of shrines assign you some of the most challenging tasks and those involve retrieval of these artifacts. You can learn more about these artifacts and where you can find them in our handy Daedric Artifacts Locations guide.

You can read our in-depth Alchemy Guide to learn you can create magical potions and poisons. It will also has a list of alchemical ingredients which you can combine to create a positively or negatively related mixture.

These Shouts are magical in nature but don’t deplete Magicka. Each Dragon Shout is made up of three Words, which can be learned from the Word Wall, that is mostly guarded by a dragon. So, you know what you need to do to get all the Dragon Shouts. You can read our detailed Dragon Shouts Guide to locate and learn the all the Shouts.

With the Destruction/Restoration perk build, you will be limited to a few damage-dealing spells and healing spells – which makes things easy really but if you like more options, go for Alteration/Conjuration. You can use Alteration spells to buff yourself and debuff your enemy and then call your creatures to attack your foes.

If you want to focus on Conjuration, limit yourself to summoning and raising spells and level up perks that boost your defense. Avoid Bond weapons as a Pure Mage because they are meant to be used by Battle Mage.

Perks To Level Up

Conjuration/Alteration
Level Up all perks.

Destruction/Restoration
Level Up all perks.

This was our Skyrim Mage Magic Guide if you have any questions take to the comments below.