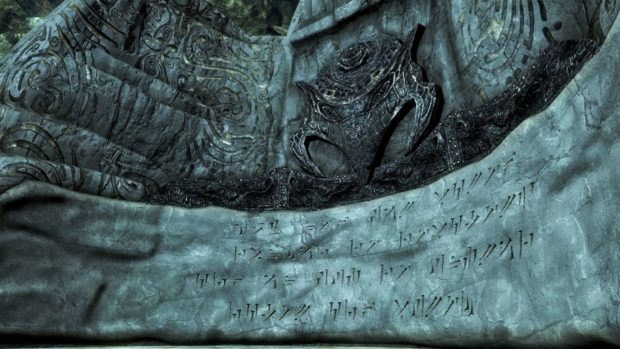 Dragon Shouts are an important part of the Skyrim’s combat and main storyline and there are a plenty of Word Walls located in the game from which players can acquire new shouts or unlock new levels of the existing ones and this Skyrim Dragon Shouts locations guide will help you acquire all the shouts in Elder Scrolls V Skyrim.

In Elder Scrolls V Skyrim, you are Dragonborn. That means you can learn the language of the dragons to perform Skyrim dragon shouts which are spells of sorts and deal a great deal of damage to your enemies. You don’t need to be a mage, to use these shouts and our guide will help you find all Skyrim Word Walls locations.

You can learn these Dragon Shouts by standing near these ancient inscriptions (Dragon Wall), but for that, you will have to find the locations of these specific inscriptions.

This guide will list all the Skyrim Word Walls locations scattered throughout Skyrim so that players can unlock new shouts which will come in handy in combat. Also, it is important to note that these walls will give players the shout but to use it they will have to unlock with a Dragon Soul and each shout requires 3 Dragon Souls to unlock all three levels of each Dragon Shout.

We have explained the locations of these Skyrim Dragon Shouts as precisely as we can, but to be honest, you only need to get close enough and Dragon Shout will be marked on your map. If there is a dragon icon on the map, it means it’s either a shout or a dragon.

Alongside the locations, the guide will also state the actual Dragon Shout Effect – what ability you actually gain from attaining the Dragon Shout.

Learn all the Dragon Shouts by reading the ancient inscriptions from the specified locations described below!

Your Voice is raw power, pushing aside anything – or anyone – who stands in your path.

2# Balance
Location. It will be given to you by Arngeir when you complete the main quest ‘The Way of the Voice’ in High Hrothgar.

3# Down
Location. It will be given to by Arngeir when you take the horn back to him in the main story quest ‘Horn of Jurgen Windcaller’.

The Thu’um rushes forward, carrying you in its wake with the speed of a tempest.

1# Whirlwind
Location. It will be given to you by Borri in the quest ‘The Way of the Voice’ when you get to High Hrothgar. This will be after you get ‘Balance’ Word of Unrelenting Force dragon shout.

2# Fury
Location. Volskygge, high mountains in the corner of the Skyrim map, west of Solitude, is an ancient temple with a dragon shout guarded by a powerful demon. You need to go northwest from Volskygge on the map, up closest to the mountains to get this dragon shout word.

3# Tempest
Location. You will get it in Dead Men’s Respite when you complete Bards’ College Quest – Tending The Flames.

The Thu’um reaches out to the Void, changing your form to one that cannot harm, or be harmed.

1# Fade
Location. Complete ‘The Way of the Voice’ quest and Arngeir will send you to Ustengrav Depths to retrieve the Horn of Jurgen Windcaller. In the main cavern room, instead of heading to the objective, go outside and to the bottom where the waterfall is with the green trees. Here, look at the base of the platform with word of power on it.

2# Spirit
Location. Find the settlement with waterfalls and large stone structures between Markarth and Falkreath. Reach the top and fight the Hagravens. Look for this dragon shout word in their little den, at the end of the Bard’s Leap Summit Point – This is the place you are standing over the waterfall.

Your Thu’um freezes an opponent solid.

1# Ice
Location. You can find it in the Mount Anthor. It’s on the middle mountain in the range to the northwest of Windhelm, home to a dragon. You will also get this location from Arngeir at High Hrothgar when you talk about dragon shout locations.

2# Flesh
Location. You will get this during ‘Under Saarthal’ mission for the circle of Mages. It is at the end after you have discovered the artifact you are look for, in the Saarthal dungeon. When you are heading out of the dungeon, look for it in the southwest of Winterhold.

3# Statue
Location. You will find it Frostmere Crypt during Dungeon Quest – The Pale Lady.

The Voice soothes wild beasts, who lose their desire to fight or flee.

1# Kyne
Location. Rannveig’s Fast – defeat the ice dragon protecting the entrance and head in to learn the dragon shout word.

2# Peace
Location. Shroud Hearth Barrow Depths. In Ivarstead, there is a quest from the Inn Keeper, Wilheim. Head into the Barrow and take care of the annoying spirit and you will get Sapphire Dragon Claw as a reward from Wilheim.

After that, you will gain access to the previously locked door inside the Barrow. Head inside and follow the path to the end to learn second Kyne’s Peace Dragon Shout word.

3# Trust
Location. Ragnavald Temple, north of Markarth, in the mountains are the ruins called Ragnavald with the temple inside. Head to the left and right into the canal and the crypts to get the keys to getting access to the dragon shout area. Defeat the Daedric, ortad the Mod to learn the third dragon shout word.

Your Voice is not a Shout, but a whisper, revealing the life forces of any and all.

1# Life
Location. Northwind Summit. After you receive a letter from a ‘friend’ regarding a source of power in the mountains between Windhelm and Riften. It is round the corner from Shor’s Stone – fight the dragon to learn the Dragon Shout word.

2# Seek
Location. You will find it Valthume when you complete Dungeon Quest – Evil In Waiting.

3# Hunt
Location. You will find it in Volunruud and will require you to complete either Dark Brotherhood Quest – The Silence Has Been Broken or Dungeon Quest – Silenced Tongues.

A Shout for help from the beasts of the wild, who come to fight in your defense.

1# Animal
Location. Head into the Helgen and take the southwest Bonechill Passage. The dragon shout word is on the other end, protected by a dragon. Watch out for the Snowy Saber Cat inside Bonchill – she is fast and very strong.

2# Allegiance
Location. You will find it in Angarvunde in the Rift When you complete Main Quest – Medresi Dran And The Wandering Dead.

3# Pack
Location. You will find it in Ysgramor’s Tomb in Winterhold when you complete The Companions Quest – Glory Of The Dead.

Inhale air, exhale flame, and behold the Thu’um as inferno.

1# Fire
Location. You will learn it in Dustman’s Cairn quest but after you have done ‘Proving Honor’ quest from The Companions because it opens a new area of this dungeon with this dragon shout word.

2# Inferno
Location. You will learn it during the main story quest – ‘Throat of the World’.

Speak, and let your Voice herald doom, as an opponent’s armor and life force are weakened.

1# Kill
Location. Automnwatch Tower, south of Ivarstad, further south of Rift Imperial Camp, you will find couple towers in the mountains. There is a dragon here, at the top of the farthest tower to the south, protecting this dragon shout word.

2# Leech
Location. Inside ‘Forsaken Cave’, southwest of Winterhold, at the base and south of mountains that surround it. It is north of that small lake on the map. It won’t be easy to learn this dragon shout word though, because it is guarded by Draugr, which is really pain-in-the-ass to fight against.

Your breath is winter, you Thu’um a blizzard.

1# Frost
Location. Brownstrewn Crest, south of Windhelm in the middle of the swampland on top of the large hill. It is guarded by the dragon. Defeat the dragon and learn the dragon shout word.

2# Cold
Location. Kill the dragon in the Dragon’s Lair in Skyborn Altar and learn this shout from the Word Wall.

3# Freeze
Location. Folgunthur, southeast of Solitude, on the way to Morthal. It is guarded by a power Draugr.

And the weak shall fear the Thu’um, and flee in terror.

1# Fear
Location. Lost Tongue Overlook, after killing the dragon you get from a bounty letter from Windhelm in Ivarstead’s Inn.

The Thu’um imbues your arms with the speed of wind, allowing for faster weapon strikes.

1# Air
Location. Dragontooth Crater, between Solitude and Markarth in the northwest of Skyrim. It’s a large mountain range.

3# Grace
Location. In Kilkreath Ruins when you complete Daedric Quest – The Break of Down.

The Thu’um is heard, but its source unknown, fooling those into seeking it out.

Voice, Fool, Far
Location. West of Windhelm, at the top of the big mountain near it. It is guarded by a power Daedre called Krosis, defeat him to get all three Dragon Shout words.

Shout defies steel, as you rip the weapon from an opponent’s grasp.

1# Weapon
Location. Top of the mountains, south of Morthal. Look for the Eldersblood Peak where a dragon and dragon shout can be found.

2# Hand
Location. When on ‘Speaking With Silence’ thief quest, head to Snow Veil Sanctum. In the second area, Mercer will mention something about being a perfect ambush area. It’s in that room.

3# Defeat
Location. In the Silverdrift Lair.

Shout at time, and command it to obey, as the world around you stands still.

1# Time
Location. During ‘The Staff of Magnus’ guild quest, When fighting Draugr Deathlord in the last level of Labyrithian. You can either take on Draugr or get an artifact that gives you access to this area.

2# Sand
Location. Northeast of Whiterun, snowy area of the map, look for Korvanjund. The dragon shout word is in the crypt, in the area at the bottom. You will come here on the second Imperial/Stormclock quest.

Skyrim itself yields before the Thu’um, as you clear away fog and inclement weather.

Sky, Spring, Summer
Location. You will get all three words for this shout from Arngeir in the mission ‘Throat of the World’, when you get to High Hrothgar.

Your Voice lashes out at a dragon’s very soul, forcing the beast to land.

Mortal, Finite, and Temporary
Location. You will learn all three dragon shout words in ‘Alduin’s Bane’.

A Shout to the skies, a cry to the clouds, that awakens the destructive force of Skyrim’s lightning.

1# Storm
Location. High Gate Ruins, east of Solitude. Look for a huge structure and set of ruins. Head inside and down to the last chamber which is Vokun’s Throne Room. Defeat Volkun and find the word in the room behind the one, you are in.

2# Wrath
Location. You will learn it in the main story quest ‘The World-Eater’s Eyrie’, at the Skuldafn Temple level.

Odahviing! Hear my Voice and come forth. I summon you in my time of need.

Snow, Hunter, and Wing
Location. You will learn all three dragon shout words during ‘The Fallen’ quest.

The valiant of Sovngarde hear your Voice, and journey beyond space and time to lend aid.

Hero, Champion, and Legend
Location. You will receive these dragon shout words during the main story quest ‘Dragonslayer’.