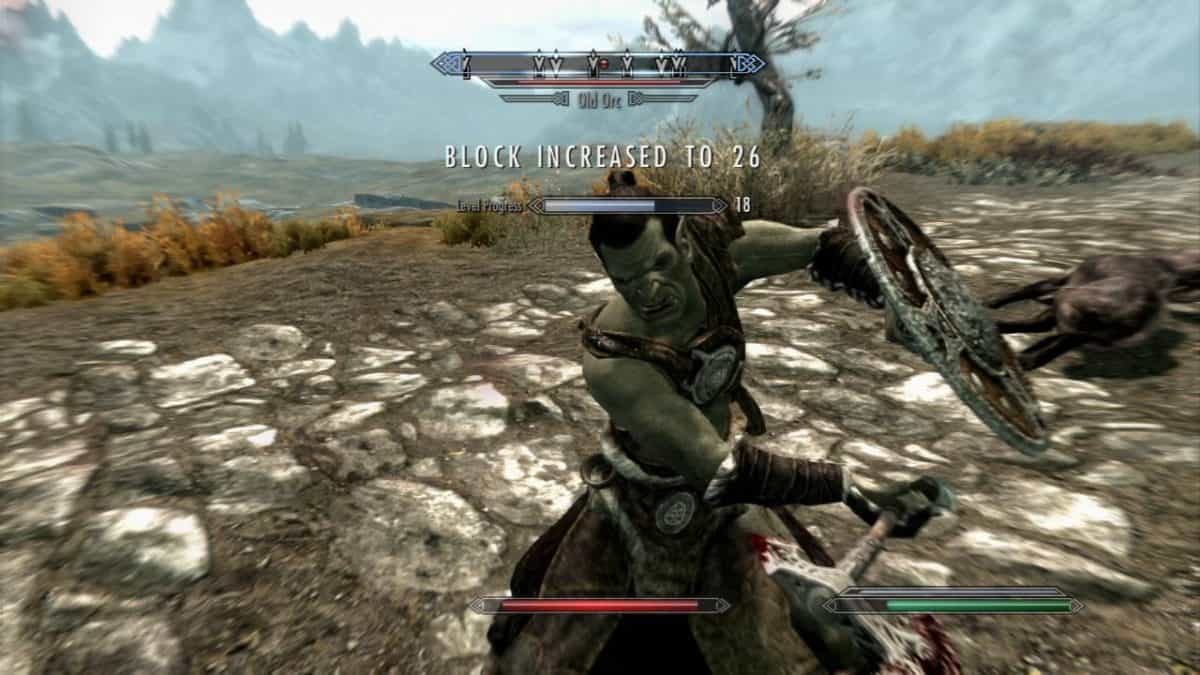 Combat in Skyrim gives you a variety of options in how you can engage with your foes. You can use dual-wielding combinations: Sword+Spell, Sword + Shield, Spell + Spell, etc.

You can be a stealthy Assassin, magic is there, and or you can use a combination of different fighting styles and create your own hybrid. Such is the flexibility Skyrim provides you when it comes to combat.

Whatever the combat stance may be, these tips will help you survive longer in any given fight. For more help on Skyrim, read our Skills/Perks, Skill Trainers, and Standing Stones Guide.

Similar to all the Elder Scrolls games, Skyrim is rather strange when it comes to combat. This is mainly due to its first-person fighting approach.

You can utilize the Power Attack by holding down on your attack button, this will allow your character to make a critical blow to your enemy, which will amount to twice the usual damage, with a chance of staggering the enemy. Although this costs more juice thus you may only land one or two of these at level 1, before you run out of juice. Consider landing Sneak Attacks whenever you’re hidden by pouncing onto your prey.

Do not lower difficulties
Set the difficulty to Adept, which is also the default difficulty. While enemies don’t level corresponding to your game’s character.
If the game is hard, it is supposed to be, it will compel you to level your character and improve your skills

You will be allowed to go sword-on-board or dual wield with One-Handed weapons in combat.

If you’re going one-handed, you can consider dropping your shield and picking up a weapon using your off-hand. If you do this, you will want that most of the perks can just come to you when you’re one-handed. Here, the dual flurry perk increases the dual-wield attack speed.

The first thing you will need for one-handed i.e. heavy weapons is stamina. You should be very careful and look at your stamina every time you fight. Wasting out at the wrong spot is very dangerous; one of the first perks to upgrade would be the power attack. It increases your strike’s damage and may stun the enemies too. So once they are stunned you can simply use a powerful magic spell.

You will have to get a lot of gold, improved gear, and a better character. You can make money from crafting, which allows you to make cheaper components into valuable weapons which you can then sell to the blacksmith.

While Enchanting allows you to make most of the powerful weapons of the game.

Skyrim has various guilds and factions. You can just go ahead and join all the groups that you like, such as The Companions, College of Winterhold, the Dark Brotherhood.

Don’t piss anyone off

You should never anger the mammoths or the giants either.

There are too many sidequests in Skyrim, while a lot of them happen to be better than the main story quests. Consider doing whatever quest anyone gives you.

Travel with your friend

When you get your first companion, take them with you on difficult quests. This will make your life a lot easier for yourself.

Level abilities up by using them

You have to level up by performing particular tasks. Consider getting into a fight with your sword and you will level up your one-handed fighting. You will also level up lock-picking if you pick a lock.

Stay Away From Frosting

Frosting is very dangerous, you get frost and you’ll lose almost all of your stamina and sufficient amount of health. So when you’re building up your character, even 10 percent of Frost Resisting is useful. Try to equip perks and potions which are against/increase your frost resistance.

Your character is a rare breed. It is heard that some people are born with a very special ability, they can speak a language which is native to the dragons and your character is a dragonborn, so he is one of them.

Shouts are not magic nor powers so they don’t consume Magicka. The better you shout (hold your button) the more effect will be. There are three words per shout; the effect of your shout is increased as you learn more and more words.

The new words are learnt from different Word Walls throughout the world. Once you have found the word, you’ll have to unlock it by the Dragon Souls which are found by slaying dragons.

Powers are racial abilities. Every race has their own powers:

Adrenaline Rush
The Stamina Regenerates 10x faster for a minute

Ancestor’s Wrath
Opponents that are very close to you get 8 points per second of fire damage, for a minute.

Battlecry
The flees are targeted for 30 seconds

Beast Form
Form of the wolf

Command Animal
You can make an animal, your ally for a minute.

Dragon Skin
For a minute, the dragon skin absorbs 50 percent of Magicka from hostile spells

Histskin
The health is recovered ten times faster, for a minute

Night Eye
Night vision is improved for a whole minute.

Voice of the Emperor
The Speech points are increased by 30, for half a minute.

There are many sorts of spells throughout the game. These spells are not a must for you, a character can lead his entire life without practicing any of these spells.

The spells are not only used for defense and attack but other attributes too, this includes smithing too. There are various unique spells in the game and they eat up a lot of Magicka too.

For more help on spells, read our Magic Guide.

Spellcasting
Casting Spells require Magicka, its like stamina of magic. You should invest points for increasing the total Magicka according to the way you play. If you’re not an expert then the high level and bigger spells will consume a lot of Magicka.

Dual-Casting
Dual Casting is a perk which allows you to use both of your hands to do a magic. You can assign both your hands to perform a single magic, but in a combined and more powerful way. This obviously consumes more Magicka but the damage done is worth it.

How To Recover Magicka Quickly
Magicka is very important and depletes when you use magic – so here is a trick which can prove quite handy to recover your depleted magicka quickly.You need the following perks and abilities to do the trick:

First of all equip the fast healing spell in one of your hands and the equilibrium in the other. Save the game and start casting equilibrium. It will convert your health points into magicka (25 health points per second). Now with the help of half-cost FAST-HEALING you can simply use it when your health drops to half or so.

You will specialize in this after sometime. You can easily gain up ¾ magicka within seconds although it is very difficult to full your health and magicka by this. Make sure that you stay out of enemies’ range while you’re doing this as it may kill you when you’re draining your health.

There are times when casting a spell or using a weapon is not a way to win. In such a situation you will have to make use of your fists. This may help you to gain respect or break the face of the other person.

When you’re in a brawl you must not use any spell/weapon but your fists only. If you get low on health then you can back off and regenerate your health though.

You can also bet (100 gold, 200gold?) on your brawling as all the citizens in Skyrim are very much confident with their hands and will never back off.