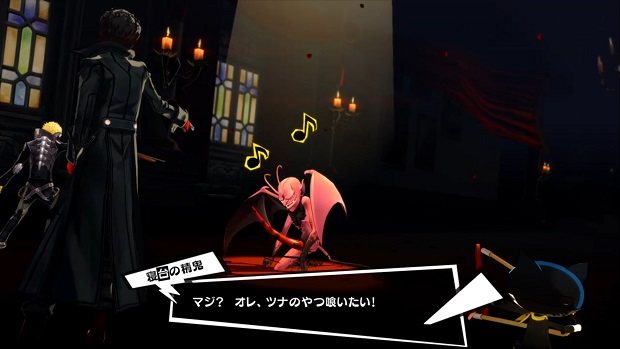 Our Persona 5 Negotiations Guide will help players negotiate with personas, find their weaknesses and then capture them.

The Persona negotiation system returns in Persona 5, forcing players to answer a variety of questions put forth by enemy personas, which the players must answer in order to capture the persona.

Negotiation with a Persona requires players to have knowledge of the personal traits of the persona in question in order to successfully capture.

The best way to figure out a Persona’s weakness is to unlock a skill for that use. However, if players don’t have that skill, they can still use elemental magic attacks or guns to see which move can cause the Persona to enter a “weak” state.

Once players know the weakness of a Persona, they can simply press the R1 button to use the move which induces the specific weakness.

Once the enemy Persona is weakened, a Hold up begins after which players can simply approach them and either talk with them or attack.

If players choose to talk with a Persona and enter negotiations, they will have the chance to recruit them or ask them for money and items.

To recruit them, choose the dialogue, “lend me your power”. For negotiations to be successful, players will need to answer some questions correctly.

These require knowledge of personal traits of that persona so players should study up on those before attempting to answer the questions.

Below are the personality types of Persona found in Persona 5 along with their respective likes and dislikes :

To understand which type of Persona you are dealing with, analyzing it in mid-battle can be a good option, otherwise, just simply look for its type on the top left portion of the screen during a Hold up.

The best way to make sure that the Negotiation process is successful, players can spend some time to level up at the Sun Arcana.

If players manage to reach the max rank, they will gain the ability to have a Persona join their rank instantly without having to negotiate.

Another way to force a persona to join the party is to kill all the surrounding personas, leaving just one alive. This results in the persona panicking and fearing the player.

Players can then simply ask the persona to join their team without having to answer any questions.