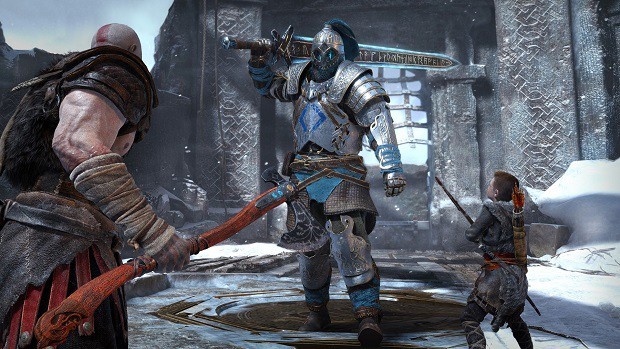 In this God of War Upgrades Guide, we will be guiding you on different upgrades and powerful skills that you can purchase and equip in God of War 4. For the first time in any God of War game, we have the ability to upgrade both Kratos’s armor and weapons as well as Atreus’s weapon and armor.

This section will tell you about all weapons that are owned by Kratos and Atreus and how many upgrades each weapon has.

Leviathan Axe is one of Kratos’s weapon and it can be upgraded once you return the Frozen Flames to Brok or Sindri. It has a total of six upgrades. Here is how you get them:

Kratos’s signature weapon, Blades of Chaos, return in God of War and this time they are better than ever. You will have to return Chaos Flames to Brok or Sindri first to start upgrading them. They come with five upgrades:

Talon Bow is Atreus main weapon and you will be using them frequently on the journey. We recommend that you upgrade them as well along with Kratos’s main weapon because they are very useful.

You can upgrade them at Huldra shop if you have enough Hacksilver and Svartalfheim Steel.

You can upgrade Atreus’s Quiver 4 times to unlock additional abilities for it.  Here is how you can acquire all 4 upgrades for the Quiver.

Armor Upgrades in God of War

Kratos has a three-layered armor that includes chest, wrists, and waist. The armor plays a vital role in affecting different stats and bonuses. As you progress through the game, you can unlock better gear but even the basic set of armor can be upgraded at shops to make it further.

Furthermore, the armor pieces come with Enchantment Slots where special enchantments can be equipped to make it even more effective.

At maximum, a piece of armor can equip three enchantments. Upgrading armor increases the number of enchantment sockets as well. You can also craft armor pieces yourself if you have the required materials.

Similar to Kratos, Atreus’s armor can also be upgraded. He has a single-piece armor so it is quite simple to upgrade his armor. You can upgrade his armor from shops by spending the required materials for the upgrade.

New to God of War, these Runic Attacks and Summons are special abilities and moves that you can equip to unlock special moves and skills. Each weapon can be equipped with a unique Runic Attack, which then can be performed by pressing the corresponding keys. If you want to unleash a Light Runic Attack, press L1+R1 otherwise press L1+R2 for a Heavy Runic Attack.

If you want to use Atreus’s Runic Summon, you can press square. All these special attacks can be used once they are charged. They need to be charged after every time so you must time them carefully and use them only when you really need them.

However, you can further improve these Runic Attacks and Summons to reduce their cooldown timers and attack power.

You can use the XP that you earn while playing the game to earn some cool new skills. These skills are specific for each weapon, which are Leviathan Axe, Blades of Chaos, Guardian Shield and Talon Bow. You can also unlock some skills for the Rage Mode.

Apart from the Guardian Shield, all weapons must be upgraded to unlock more skills. Each upgrade unlocks new skills for you to purchase and use.

These skills provide you with different types of bonuses for a specific stat. The condition of these bonuses is that the stat must reach a specific level in order to trigger the bonus.

The level required for Cooldown stat is 125, Defense stat is 300, the Runic stat is 250, and Vitality stat is 225. You may also require special gear for utilizing these bonuses and reaching these levels.

Best Skills to Upgrade First in God of War

Here are the 10 Best Skills to Upgrade First in God of War 4. We’ve ranked these based on their effectiveness.

This skill is good for crowd control and slowing down enemies as you’ll deal frost damage with each hit once your combo builds up high enough.

Pride of the Frost

Use the following combo ( R1 + R1 + R1 + R2) to perform a heavy finisher at the end of the combo that deals an insane amount of damage.

An unblockable counterattack that deals massive damage but requires a little practice to master.

Allows you to deal 2x damage on every other axe throw. This lets you deal with weaker enemies before they can even get close to you and even cripple strong enemies, allowing for easier finishers.

A crowd control ability that deals splash damage at every other Axe throw.

An almost unavoidable attack that lets Kratos charge at his enemies and leap forward to knock them back. You can even throw enemies off the map using this skill.

Allows Atreus to stun enemies so that Kratos can follow up with deadly finishers.

Let’s Kratos charge his finishers to make sure that no one escapes his fury, especially the late-game enemies who have health regen abilities.

Atreus will help you build your combo and the overall feeling of combat will improve as Atreus becomes a lot more useful.

In addition to Runic Attacks, you can also equip pommels on Leviathan Axe and Blades of Chaos. They provide a unique perk and increase the overall stats of each weapon.

You can upgrade these pommels for increasing their effectiveness of increasing the weapons stats even further in the shop. For a complete list of pommels, you can check our Pommels Guide by heading over to the link.

Talismans can be equipped by Kratos for increased stats and sometimes a bonus attribute. These Talismans can be specifically targeted at a certain stat or could benefit multiple stats as well.

Some Talismans also come with an ability that you can activate anytime you like. Some of the later game Talismans are very effective and are worth all the trouble of finding them.

The usefulness of a Talisman depends on its rarity as God of War 4 has Talismans divided into 3 rarities;

Epic Talismans have the best abilities and are very helpful during combat.

Enchantments are equipped in special sockets in armor or sometimes talismans to increase base stats and bonus perks. They help you achieve desired builds as you can increase a certain stat with their help or go for an all-rounder effect.

Upgraded armor pieces have more enchantment sockets allowing you to equip more on the same armor piece. They cannot be used if your armor does not come with Enchantment Sockets and only one enchantment is equipped in one socket.

You can check out the complete list of enchantments in our God of War Enchantments Guide by heading over to the link.