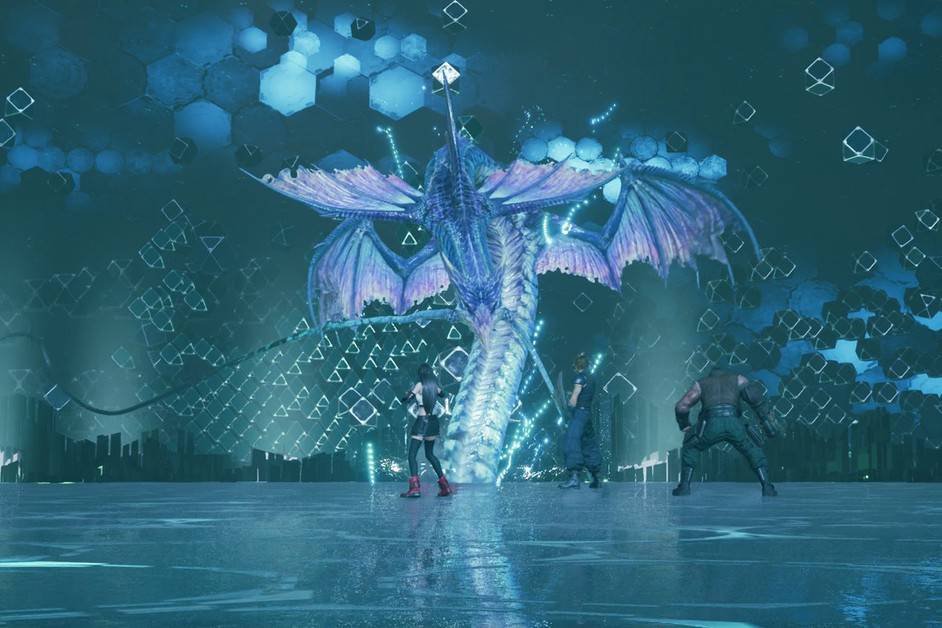 The Leviathan is a deadly but optional boss to fight in Final Fantasy VII Remake. It is a summoning Materia that summons Leviathan, the flying sea serpent whose attacks deal with considerable damage.

Leviathan is an optional boss in FF7 Remake, and you will not encounter it during the main story. You will face Leviathan during Chadley’s Battle Intel mission in Chapter 14, “In Search of Hope,” here, you will have to fight the serpent in a VR mission.

It is suggested that you wait till you reach Level 30 before taking on Leviathan. This boss in FF7 has extremely damaging attacks that will wipe you out if you don’t have enough HP.

If you want to take on this boss before reaching near level 30, make sure to have an equipped party member with a level 2 barrier and enough magic defense.

Defeating the Leviathan with its unavoidable attacks is a challenging task. Before you take down this boss, you need to be well aware of its immunities, weaknesses, and resistances.

Immunities of Leviathan include Berserk, Slow, Stop, Sleep, Poison, and Silence. Moreover, Leviathan does no drop or have any stealable items.

The greater resistances of Leviathan include Fire, Fixed Damage, and proportional damage.

Immunities of Leviathan include Berserk, Slow, Stop, Sleep, Poison, and Silence. Moreover, Leviathan does no drop or have any stealable items.

Essential Materia for taking down Leviathan

Here are some essential Materia that we suggest before you take down Leviathan. Firstly, you need to have Thunder Materia for all of your party members. The major weakness of Leviathan is Thunder, so this is a must.

Leviathan is also reluctant to magic, so you must level up your Barrier Materia to level 2.

This Materia will allow you to cast Manaward, which is fantastic for magic defense. Use Barrier Materia to magnify and increase your party’s magic protection.

Moreover, Leviathan is also resistant to Ifrit and Shiva, so make sure you have Chocobo and Moogle or Fat Chocobo as your summon.

Revive Materia is a good option compared to Phoenix Down to bring characters back to life with more HP.

Almost all of the attacks of Leviathan are magical, so make sure that your magic defense is as high as possible.

There are two significant areas on Leviathan that you need to focus on while attacking him. These parts are the head and the body of Leviathan.

To target the head of Leviathan, keep Barret aimed at his head and then attack with Tifa and Cloud when you get the chance.

Leviathan moves around a lot, and his head and body are tough to target.

It is suggested that you wait until he is stable before you unleash your abilities. Otherwise, the limit breaks on it, and it’ll be difficult for you to attack him.

These are some useful tips for you to deal with different attacks made by Leviathan in FF7.

Spinning Dive
Spinning Dive is a powerful and unavoidable attack; you will have to guard it. The Leviathan will first dive at a far reach and then dive back to the arena with force; this dive will knock your character up; you must guard it.

Tidal Roar
During Tidal Roar, Leviathan leaves a cyclone below while preparing for this attack. It would help if you got out of reach to avoid this attack.

Tidal Wave
This attack is unavoidable, and it knocks everyone on the map altogether, it might be difficult, but it’s impossible to knock it out of its charge ability by staggering it.

On a more practical note, you can make sure everyone in your team is at maximum health to avoid being knocked out.

A better option would be to use an equipped Barrier Materia to Magnify and use Manaward to increase your team’s magic resistance boost.

Tail Whip
This Tail Whip is a physical AOE attack with a much shorter charge time. You can get away from it to avoid it or guard it.

Briny Barrage is a long-range missile attack; it is better to guard it.

Briny Bellow
Briny Bellow is a line attack that is harder to dodge if you’re far away. It’s best to block it if you’re close to Leviathan, then position yourself behind it.

Gyre Spume
Gyre Spume is a short charge-up AOE attack; this attack will tip you off when it’s approaching, it is better to run away from it and unleash magic attacks on it.

Phase 1 of Leviathan Attacks – Grounded
During the first wave of Leviathan attacks, he will be positioned on the ground. Make sure to watch out for the attacks mentioned above.

Long-distance Barrett shots will be suitable to use here. An excellent option to cause more damage to Leviathan would be to use Cloud and Tifa.

Phase 2 of Leviathan Attacks – Flying
When Leviathan’s health is halfway decreased, it makes its Tidal Roar attack. You can use this opportunity to heal up.

Avoid the cyclones below and block missiles from the Briny Barrage attack. Switch to Barrett because he has the range to damage the Leviathan.

Leviathan comes down to the ground to make its Spinning Dive Attack in Phase 2 as well. During these attacks, Tifa and Cloud will be suitable to use.