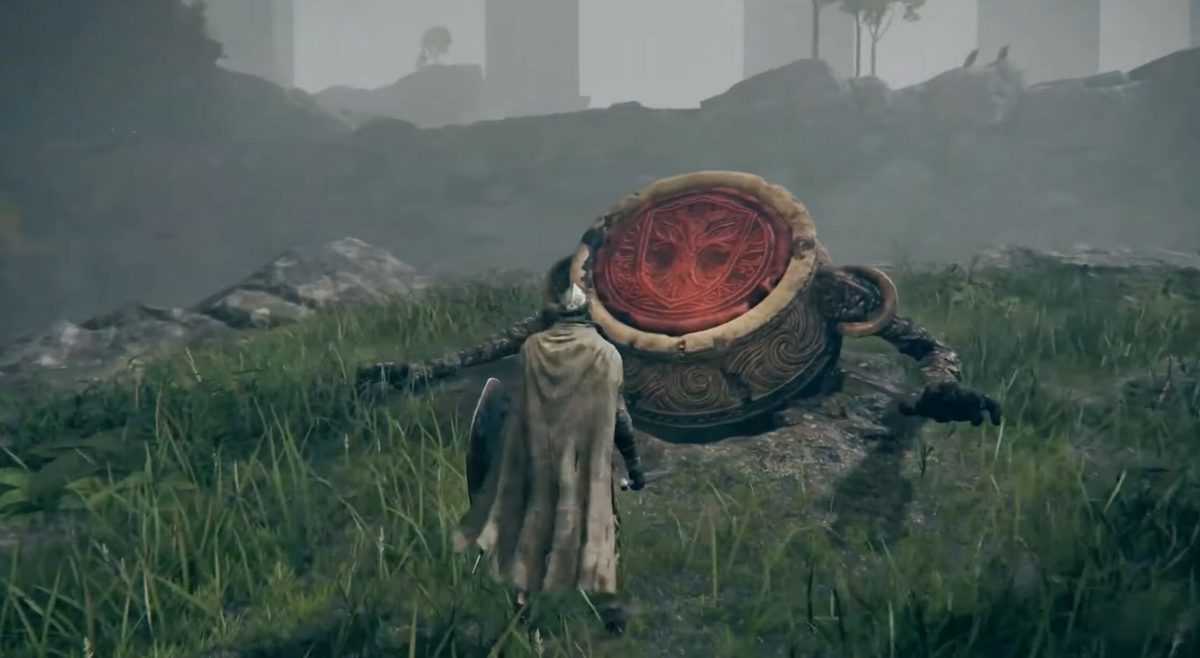 Initially, you’ll find Alexander at Limgrave (Stormhill); you must interact with him and free him from the hole. This can be done by performing a strong attack from the back.

Once you’ve performed a strong attack, Alexander pops out of the hole and rewards you with the Triumphant Delight Gesture and a piece of Exalted Flesh.

Alexander can be located in Redmane Castle, where he will discuss his anticipation for the upcoming battle with Radahn.

Alexander can then be called to combat Starscourge Radahn in the boss battle. He will show up at the event and introduce himself if he has not been approached previously.

He may be seen scavenging in Starscourge Radahn’s Site of Grace before moving on to his next site. To continue his questline, he must be talked to until all dialogue is exhausted.

Liurnia of the Lakes

Alexander can be located immediately south of Carian Study Hall in Liurnia of the Lakes. From the Artist’s Shack Site of Grace, take the trail south.

As the player approaches Alexander’s position, he will shout out for assistance. He’ll want that you make him slippery. To liberate him, use an Oil Pot or a Roped Oil Pot. If you go to Mt. Gelmir after the Radahn festival, you can skip this step.

At a lava lake, south of Fort Laiedd on Mt. Gelmir, Alexander can be located near the Seethewater Terminus Site of Grace. Behind a Magma Wyrm, Alexander is sitting in the lake.

Alexander can be reached from the lava lake’s rock. He will give the player the Jar once he has exhausted all of his conversations.

Foot of the Forge at Mt. Gelmir

Alexander can be called to battle against the Fire Giant boss. Take the Southern trail to find him. Only after approaching the area, he will emerge.

In Crumbling Farum Azula, Alexander can be located. Go up the flight of stairs from the Dragon Temple Lift grace, through the courtyard packed of undead, and turn right to find two square bracket-shaped archways. To get to the other side, use the archway on the left.

After passing the falling tower, Alexander can be located in the flat arena. He will challenge you to a fight, and if you win, you will get Alexander’s Innards and Alexander’s Shard. If you lose, he will keep challenging you until you succeed.

The Summary of Alexander Quest is following:

Help Alexander out of the Ground at Stormhill

Once you have found him at the Northern Stormhill location, he will introduce himself to you. After freeing Alexander from the hole, you are ready to meet him in other locations and progress through his quest. Keep in mind that his quest also intersects with Seluvis, Raani and Blaidd’s questlines.

Alexander will also tell you about his next destination, Redmane Castle in Caelid. Finally, he will tell you that he will attend the Combat Festival that is taking place in Redmane Castle.

Enter through the main entrance of the dungeon in Caelid and make your way towards the end while clearing the dungeon during the process to unlock the door at the end, where you’ll find Alexander to interact with.

Now you should head towards the Redmane Castle, and you will find out that there is no festival taking place there.

You will find a significant number of enemies in the Redmane Castle but not the Festival since the festival can only be triggered during Ranni the Witch Questline.

Now you can access Seluvis in his rise, and Blaidd will move to the Siofra River in Elden Ring. Your task is to speak to the Blaidd in Siofra River and, after that, talk to Seluvis according to the instructions given to you by the Bladid.

Doing that will give you access to the Seluvis Questline. After that, when you get back to the Blaidd again, he will tell you that you can find him again in the Redmane Castle in the fight against Starscourge Radahn. During that fight, you can again summon Alexander the Iron Fist.

Your next task is to find an Oil Pot for Alexander if he gets stuck in a hole again. You can craft the Oil Pot from the Nomadic Warrior’s Cookbook [17]. Additionally, it can be purchased from Nomadic Merchant at the Siofra River underground area.

You’ll find the Merchant inside the tall tower with walkways attached to it so you can head up the ladder, make your way through some guards and drop down from the far end side to find the Merchant sitting next to some pots.

You’ll purchase the cookbook for 1,000 runes. You can then craft the pots with 1x Cracked Pot and 1x Melted Mushroom.

Once you’ve acquired the Oil Pot from the Nomadic Merchant, it’s time to use it. Visit Liurnia, south of the Artist’s Shack site of grace and the Caria Study Hall, and find Alexander trapped in a hole again while exploring his hometown of Jarburg.

This time he can’t be freed just by using a strong attack; thus, he requires the Oil Pot you previously purchased, followed by a strong attack from the back.

Once he’s successfully taken out of the hole, you can go around in the town and talk to Jar Bairn.

Acquire a Jar Helmet from Alexander in Mt. Gelmir

From being freed in Liurnia to settling down at Mt. Gelmir to strengthen himself, Alexander won’t stop traveling to different parts of the map.

To find him, you must head southwest to the Seethewater Terminus Site of Grace in the west part of the Altus Plateau, as this area can’t be accessed through the Volcano Manor.

However, before you can find Alexander, a beast known as Magma Wyrm is waiting for your arrival. Once you’ve taken care of him, meet Alexander near an Island surrounded by lava.

Although you can walk on the lava, it’s recommended to use your horse as it will gradually drain parts of your health. Once you’ve found him, talk to him and receive the Jar Helmet as a gift for finding him.

Moreover, you can fight a Demi-Human Queen on the north side to achieve the Comet Azur sorcery from Sorcerer Azur (Sellen’s Questline). You can also get rewarded with a Prattling Pate “You’re beautiful!” (Boc the Seamster’s questline).

To fight Alexander, you must first unlock a Stonesword Key imp statue. Once unlocked, you can now head to the Crumbling Farum Azula to find Alexander, who requests you to a duel to end the chapter once and for all.

Once you’ve defeated him, he’ll have a word with you and reward you with a Warrior Jar Shard, a potent talisman, Alexander’s Innards, and Shards of Alexander, which are required to complete Jar Bairn’s questline.

Alexander Missing / Not There

Sometimes, Alexander disappears after Radahn and is not found at the Oil Pot spot. That does not mean that the quest is locked or over. You can still find Alexander at the Lava Pit and the rest of the quest continue as normal. Make sure to exhaust all of his dialogues at all locations.

The rewards and drops that you will get, each time you encounter Alexander are following:

How to Summon Alexander in Elden Ring

Alexander can be summoned to face Starscourge Radahn during the Radahn Festival. When the fight starts, he will be located to the right about halfway to Radahns starting position.

You can also summon Alexander to face the Fire Giant boss, but you need to have spoken to him at Mt. Gelmir. After reaching the Church of Repose, proceed east to the ice bridge with a teleport. You must use this teleport to go to the Fire Giant boss fight.